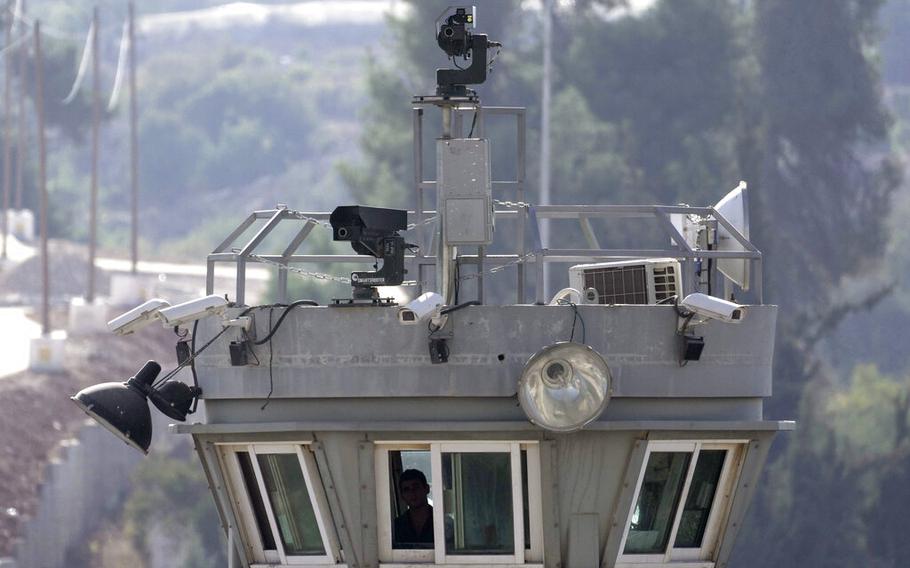 Two robotic guns sit atop a guard tower bristling with surveillance cameras pointed at the Aroub refugee camp in the West Bank, on Oct. 6, 2022. (Mahmoud Illean/AP)

The weapons, perched over a crowded Palestinian refugee camp and in a flashpoint West Bank city, use artificial intelligence to track targets. Israel says the technology saves lives — both Israeli and Palestinian. But critics see another step toward a dystopian reality in which Israel fine-tunes its open-ended occupation of the Palestinians while keeping its soldiers out of harm's way.

The new weapon comes at a time of heightened tensions in the occupied West Bank, where unrest has risen sharply during what has been the deadliest year since 2006. The victory by former Prime Minister Benjamin Netanyahu's hard-line alliance, which includes an extreme right-wing party with close ties to the settler movement, has raised concerns of more violence.

Twin turrets, each equipped with a watchful lens and a gun barrel, were recently installed atop a guard tower bristling with surveillance cameras overlooking the Al-Aroub refugee camp in the southern West Bank. When young Palestinian protesters pour into the streets hurling stones and firebombs at Israeli soldiers, the robotic weapons unleash tear gas or sponge-tipped bullets on them, witnesses say.

About a month ago, the military also placed the robots in the nearby city of Hebron, where soldiers often clash with stone-throwing Palestinian residents. The army declined to comment on its plans to deploy the system elsewhere in the West Bank.

Palestinian activist Issa Amro said Hebron residents fear the new weapon might be misused or hacked with no accountability in potentially lethal situations. People also resent what they say is a weapons test on civilians, he added.

"We are not a training and simulation for Israeli companies," he said. "This is something new that must be stopped."

There are no soldiers next to the machines. Instead, the weapons are operated by remote control. At a touch of a button, soldiers nestled inside a guard tower can fire at selected targets.

The army says the system is being tested at this stage and fires only "non-lethal" weapons used for crowd control, such as sponge-tipped bullets and tear gas. Residents of Al-Aroub say the turrets have repeatedly drenched the hillside camp in gas.

Robotic weapons are increasingly in operation around the world, with militaries expanding their use of drones to carry out lethal strikes from Ukraine to Ethiopia. Remote-controlled guns like the Israeli system in the West Bank have been used by the United States in Iraq, by South Korea along the border with North Korea, and by various Syrian rebel groups.

Israel, known for its advanced military technologies, is among the world's top producers of drones capable of launching precision-guided missiles. It has built a fence along its boundary with the Gaza Strip equipped with radar and underground and underwater sensors. Above ground, it uses a robotic vehicle, equipped with cameras and machine guns, to patrol volatile borders. The military also tests and utilizes state-of-the-art surveillance technology such as face recognition and biometric data collection on Palestinians navigating the routines of the occupation, such as applying for Israeli travel permits.

"Israel is using technology as a means to control the civil population," said Dror Sadot, spokeswoman for Israeli rights group B'Tselem. She said that even supposedly non-lethal weapons like sponge bullets can cause extreme pain and even be deadly.

The turrets in Al-Aroub were built by Smart Shooter, a company that makes "fire control systems" that it says "significantly increase the accuracy, lethality, and situational awareness of small arms." The company boasts contracts with dozens of militaries around the world, including the U.S. Army.

"They always have a man in the loop making the decision regarding the legitimate target," she said.

She said the system minimizes casualties by distancing soldiers from violence and limits collateral damage by making shots more accurate.

In a densely populated area like Al-Aroub, she said soldiers can monitor specific people in a crowd and lock the turret onto specific body parts. The system fires only after algorithms assess complex factors like wind speed, distance, and velocity.

The military said such safeguards minimize the risk to soldiers and improve supervision over their activities. It also said the technology allows soldiers to target "less sensitive" areas of the body to minimize harm and avoid shooting bystanders.

"In this way, the system reduces the likelihood of inaccurate fire," it said.

But Omar Shakir, the Israel and Palestine Director at Human Rights Watch, said Israel is on a "slide toward the digital dehumanization of weapons systems." By using such technologies, Shakir said Israel is creating "a powder keg for human rights abuse."

Violence in the West Bank has surged over the past several months as Israel has ramped up arrest raids after a spate of Palestinian attacks within Israel killed 19 people last spring. The violence has killed more than 130 Palestinians this year and at least another 10 Israelis have been killed in recent attacks.

Israel says the raids aim to dismantle militant infrastructure and and that it has been forced to act because of the inaction of Palestinian security forces. For Palestinians, the nightly incursions into their towns have weakened their own security forces and tightened Israel's grip over lands they want for their hoped-for state. Israel captured the West Bank, east Jerusalem and the Gaza Strip in the 1967 Mideast war.

In Al-Aroub, residents say the machines fire without warning.

"It is very fast, even faster than the soldiers," said Kamel Abu Hishesh, a 19-year-old student. He described almost nightly clashes where soldiers storm the camp as the automated gun fires tear gas up and down the hill.

Paul Scharre, vice president of the Washington think tank Center for a New American Security and a former U.S. Army sniper, said that without emotion and with better aim, automated systems can potentially reduce violence.

But he said the absence of international norms for "killer robots" is problematic.

Otherwise, he said, it's just a matter of time before these automated systems are equipped to use deadly force.