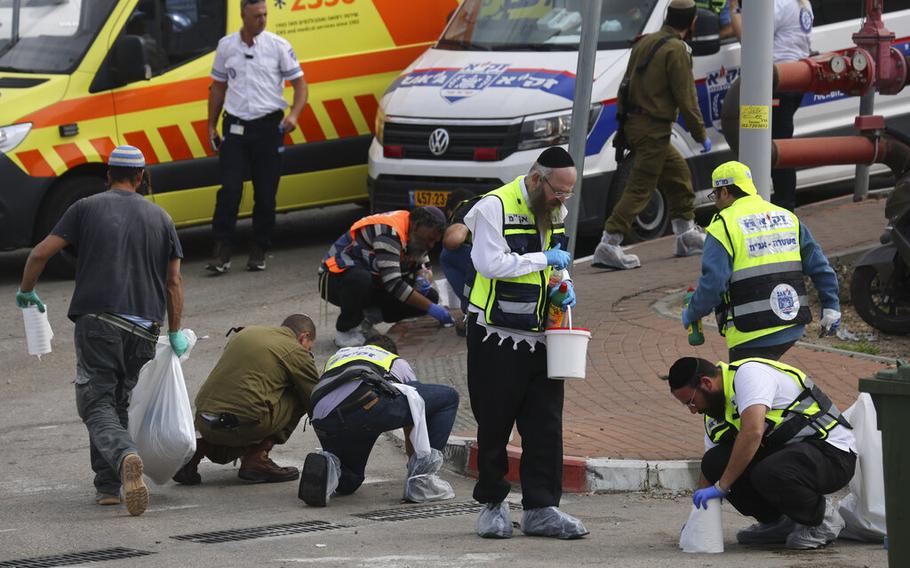 Members of Israeli Zaka Rescue and Recovery team and Israeli soldiers clean blood from the site of an attack, at the Ariel Industrial Zone, near the West Bank Jewish settlement of Ariel, Tuesday, Nov. 15, 2022. A knife-wielding Palestinian killed three Israelis and wounded three others in a settlement in the West Bank on Tuesday before he was shot and killed by Israeli security personnel. (Oren Ziv/AP)

JERUSALEM — A knife-wielding Palestinian killed two Israelis in a stabbing Tuesday at a settlement in the West Bank, then stole a car as he tried to flee the scene and crashed it on a nearby highway, killing a third Israeli, officials said.

The attack at the settlement of Ariel also left three Israelis wounded. The Palestinian was shot and killed by an Israeli soldier as he tried to run away from the crash scene.

The Zaka paramedic service said the three wounded were being treated in hospital and that they were in serious condition.

It was the latest assault in a wave of Israeli-Palestinian violence this year that has seen Palestinian attackers target Israeli civilians and near nightly Israeli arrest raids that have fueled unrest in the occupied territory.

The Israeli military said the Palestinian first stabbed several Israelis at the entrance to the settlement's industrial zone, then proceeded to a nearby gas station and stabbed more people there. The army said the man then stole a car and intentionally crashed it into another vehicle before fleeing the scene on foot.

Amateur video aired on Israeli television appeared to show the suspected attacker running down a highway and collapsing to the ground after he was shot. The Palestinian Health Ministry later confirmed that Mohammad Souf, 18, from the nearby village of Hares was the slain attacker.

Israeli army spokesman Ran Kochav told Kan Radio that Souf held a permit to work in the settlement. No group has claimed responsibility for the attack, but Gaza's rulers, the militant Hamas group, hailed it as "heroic."

Israeli Prime Minister Yair Lapid sent condolences to the families of those killed in the attack and said Israel was "fighting terror nonstop and full force."

"Our security forces are working around the clock to protect Israeli citizens and harm terror infrastructure everywhere, all the time," he said.

This year's surge in Israeli-Palestinian violence in the West Bank and east Jerusalem has killed at least 25 people on the Israeli side and more than 130 Palestinians, making 2022 the deadliest since 2006.

Israel says its almost nightly arrest raids in the West Bank — which began after Palestinian attacks killed 19 Israelis last spring — are needed to dismantle militant networks at a time when Palestinian security forces are unable or unwilling to do so.

The Palestinians say the raids undermine their security forces and are aimed at cementing Israel's open-ended 55-year occupation of lands they want for their hoped-for state. Hundreds of Palestinians have been rounded up in such raids, with many placed in so-called administrative detention, which allows Israel to hold them without trial or charge.

Israel captured the West Bank in the 1967 Mideast war, along with east Jerusalem and the Gaza Strip. The Palestinians seek those territories for their hoped-for independent state.