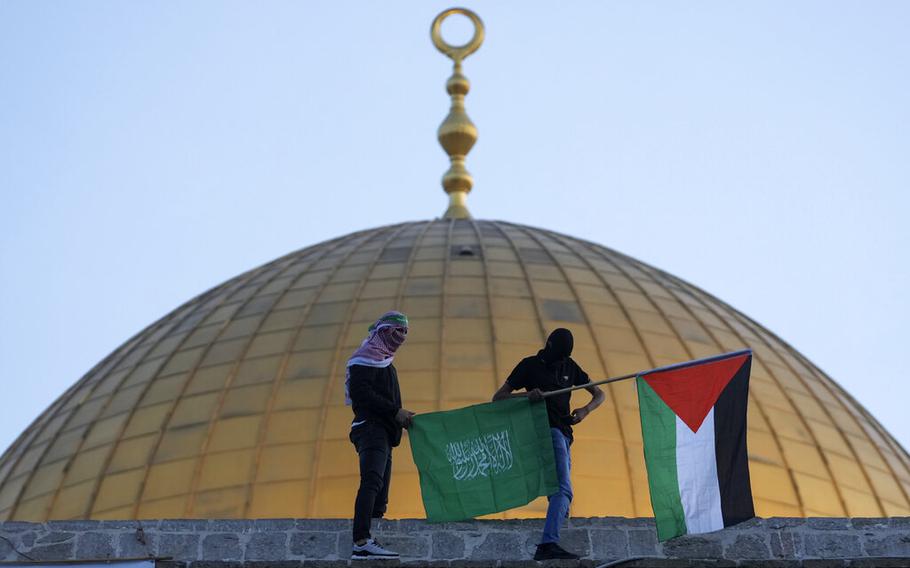 Palestinian and Hamas flags are carried next to the Dome of the Rock Mosque in the Old City of Jerusalem, May 2, 2022. The Palestinian militant group Hamas on Thursday, Sept. 22, threatened hostile actions against Israel over what it called “violations against Jerusalem and the Al-Aqsa Mosque.” (Mahmoud Illean/AP)

JERUSALEM — The Palestinian militant group Hamas on Thursday threatened hostile actions against Israel over what it called "violations against Jerusalem and the Al-Aqsa Mosque" ahead of the upcoming Jewish High Holidays.

Hamas's threats came just ahead of Sunday's Jewish new year, and a day after a group of Jewish religious extremists visited a contested holy site revered by both Jews and Muslims and blew the shofar — a ram's horn that's trumpeted in the run-up to and during the Jewish High Holidays.

The Jewish new year, Rosh Hashanah, begins at sundown on Sunday, and in the succeeding weeks thousands of Israelis are expected to visit Jerusalem.

Omer Barlev, Israel's minister in charge of police, told Kan public radio on Wednesday that Israeli authorities would not limit Jewish visits to the contested Jerusalem holy site known to Jews as the Temple Mount and to Muslims as the Al-Aqsa Mosque compound.

Visitations and prayers by hard-line Jewish radicals at the site have triggered previous rounds of violence between Israel and the Palestinians.

For Jews, the site is the holiest on earth, the location of two ancient Temples. For Muslims, it is the home of the Al-Aqsa Mosque and the third holiest place after Mecca and Medina. The shrine is the emotional epicenter of the decades-long Israeli-Palestinian conflict.

Officially, under a loose set of rules known as the "status quo," Jews are allowed to visit, but not pray at the site, which is managed by a Jordanian-run trust. But in recent years, the number of Jewish visitors to the site has steadily grown, and some hold Jewish prayer at the site under police protection.

Addressing reporters in the city of Gaza, Hamas leader Mahmoud al-Zahar decried what he called a "blatant attack on the religious and Islamic status of the city and the mosque," saying Israel bore full responsibility for "the possibility of dragging the entire region into an open religious war."

He said the militant group, which rules the Gaza Strip, would "defend the rights and sanctities of our people by all possible means."

Israel and Hamas have fought four wars in the Gaza Strip since the Islamist militant group seized power in 2007.

The most recent battle, in May 2021, began when Hamas fired rockets at Jerusalem as Israeli nationalists planned to march through Jerusalem's historic Old City, which is home to holy sites to Judaism, Christianity and Islam.

Israel captured east Jerusalem, along with the Old City and its holy sites, in the 1967 Mideast war and later annexed it in a move unrecognized by most of the international community. The Palestinians seek it as capital of a future independent state.