Iran faces US in international court over asset seizure 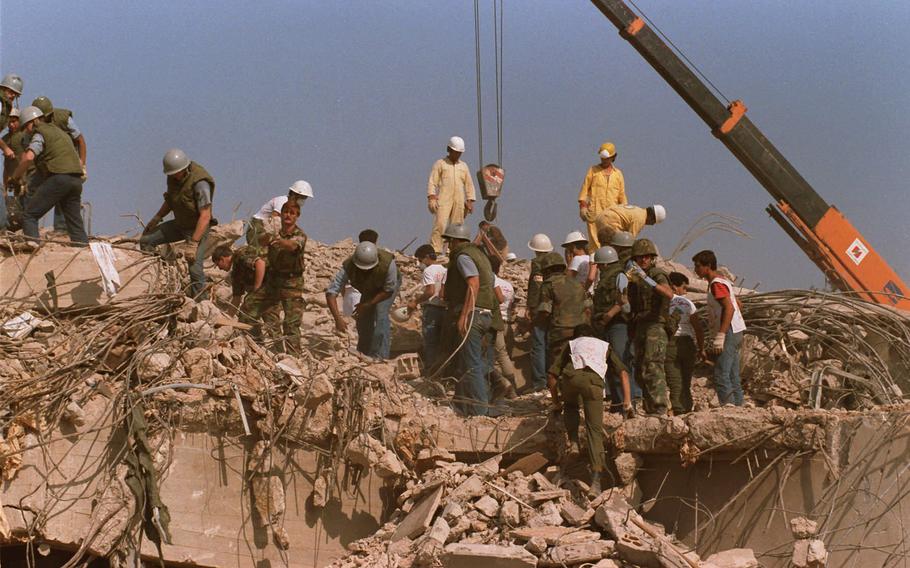 Rescue workers sift through the rubble of the U.S. Marine base in Beirut in Oct. 23, 1983, following a massive bomb blast that destroyed the base and killed 241 American troops. Iran told the United Nation’s highest court on Monday, Sept. 19, 2022, that Washington’s confiscation of some $2 billion in assets from Iranian state bank accounts to compensate bombing victims was an attempt to destabilize the Iranian government and a violation of international law. (AP)

THE HAGUE, Netherlands — Iran told the United Nations' highest court on Monday that Washington's confiscation of some $2 billion in assets from Iranian state bank accounts to compensate bombing victims was an attempt to destabilize the Iranian government and a violation of international law.

In 2016, Tehran filed a suit at the International Court of Justice after the U.S. Supreme Court ruled money held in Iran's central bank could be used to compensate the 241 victims of a 1983 bombing of a U.S. military base in Lebanon believed linked to Iran.

Hearings in the case opened Monday in the Hague-based court, starting with Iran's arguments. The proceedings will continue with opening statements by Washington on Wednesday.

At stake are $1.75 billion in bonds, plus accumulated interest, belonging to the Iranian state but held in a Citibank account in New York.

In 1983, a suicide bomber in a truck loaded with military-grade explosives attacked U.S. Marine barracks in Beirut, killing 241 American troops and 58 French soldiers.

While Iran long has denied being involved, a U.S. District Court judge found Tehran responsible in 2003. That ruling said Iran's ambassador to Syria at the time called "a member of the Iranian Revolutionary Guard and instructed him to instigate the Marine barracks bombing."

The international court ruled it had jurisdiction to hear the case in 2019, rejecting an argument from the U.S. that its national security interests superseded the 1955 Treaty of Amity, which promised friendship and cooperation between the two countries.

"The freedom of navigation and commerce guaranteed by the treaty have been gravely breached," Tavakol Habibzadeh, head of international legal affairs for Iran, told the 14-judge panel Monday.

A 2012 U.S. law ordered the bank to hand over the assets to the families of those killed in the Beirut bombing. A U.S. court concluded the attack, which struck barracks for service members conducting peacekeeping operations during Lebanon's civil war, was carried out by Iranian agents supported by the Hezbollah militant group.

Iran claims it was not involved in the attack. Habibzadeh said Monday that the U.S has created an "industry of litigation" against Iran and Iranian companies in an effort to undermine the regime. The seizure was just one maneuver "aiming to destabilize Iran and the Iranian government," Habibzadeh said.

The two countries have had no diplomatic relations since the 1979 U.S. Embassy takeover by militant students in Tehran.

The pair have a second case pending before the ICJ over the same obscure treaty. Tehran filed an unrelated complaint with the court in 2018 after former president Donald Trump re-imposed sanctions against Iran over its nuclear program. In response, the U.S. withdrew from the treaty entirely.

The hearings come as Iranian President Ebrahim Raisi headed on Monday to New York, where he will be speaking to the U.N. General Assembly later this week.

Talks between Iran and world powers over reviving a 2015 deal to curb Iran's nuclear activities remain stalled. Tehran and Washington have traded written responses in recent months on a roadmap that would see sanctions lifted against Iran in exchange for restricting its rapidly advancing nuclear program.