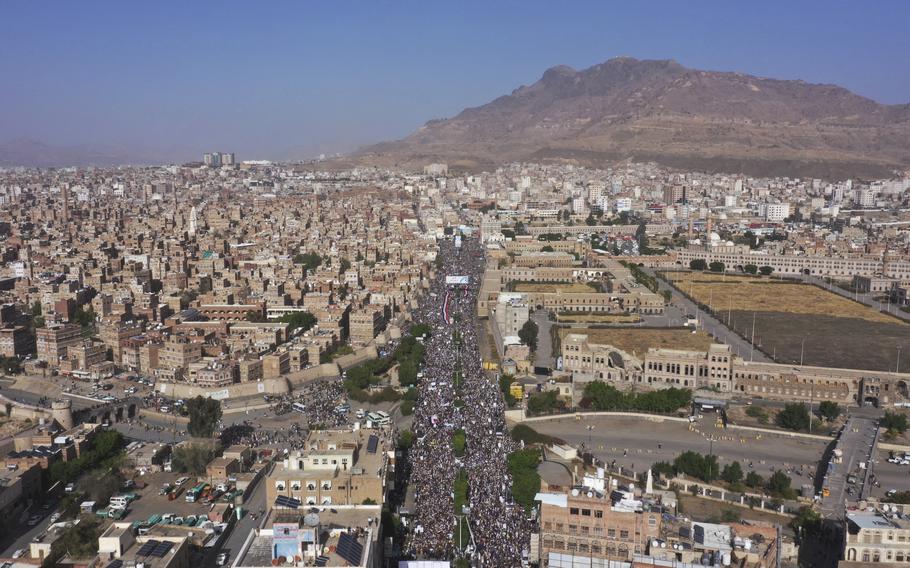 The already 4-month-old cease-fire has been the longest nationwide ease in fighting since the war began in the Arab world's poorest country nearly eight years ago.

The U.N. envoy to Yemen, Hans Grundberg, said in a statement that the country's internationally recognized government and the Houthi rebels also agreed to try to arrive at “an expanded truce agreement as soon as possible.”

Yemen’s civil war erupted in 2014, when the Houthis descended from their northern enclave and took over the capital, forcing the government to flee to the south before its exile in Saudi Arabia. A Saudi-led coalition — then backed by the United Sates — entered the war in early 2015 to try to restore the government to power. Since then, the conflict has turned into a proxy war between regional foes Saudi Arabia and Iran, which backs the Houthis.

The truce renewal announcement came hours after an Omani delegation concluded three days of talks with the Houthi leadership, including with the rebels’ chief Abdel-Malek al-Houthi in the capital of Sanaa.

After the announcement, Mohammed Abdel-Salam, the Houthi chief negotiator and spokesman, thanked Oman for its efforts and called for the U.N. to work to open the airport in Sanaa, and the key port of Hodeida in a tweet.

The cease-fire initially took effect April 2 and was extended June 2. However, there have been offensive actions during recent months, including a suspected Houthi shelling last month that killed at least least one child and wounded 10 in Taiz province.

Both sides have publicly announced that they have bolstered their front-line positions, particularly around the oil-rich city of Marib, which the Houthis have been trying to seize for over a year. There were also shows of power through military parades featuring thousands of soldiers. The government and the Houthis both claimed to have documented dozens of truce violations on a weekly basis.

But the cease-fire has brought relief for Yemenis who have suffered from a decade of political turmoil and conflict. Around a third of Yemen’s 30 million population has been facing starvation due to the war and a lack of funding for humanitarian aid, according to the U.N. food agency.

Aside from the lull in violence, the truce established two commercial flights per week from Sanaa to Jordan and Egypt, after the country's airport was closed to passenger flights for years. The truce also called for the Saudi-led coalition to allow a total of 36 vessels carrying fuel into the port of Hodeida over the course of four months. Only 29 vessels were allowed into Hodeida as of Tuesday, said Essam al-Motwakel, spokesman for the Houthi-run oil corporation.

Both Sanaa and Hodeida are controlled by the Houthi rebels, but blockaded by the Saudi-led coalition.

The truce has also called for opening the roads around Taiz, Yemen’s third largest city, which the Houthis have besieged for years. But the rebels rejected two U.N. proposals to lift the blockade, according to the envoy office. Another item on the agenda is finding a way to pay the country's public servants, many of whom have gone with little or no salaries for years due to the civil strife. The source of the funding for government employees salaries remains a serious point of contention.

Ahmed Bin Mubarak, the foreign minister of the internationally recognized government, called for the Houthis to reopen Taiz roads and to “ensure that revenues of the Hodeida ports are used to pay public servants salaries.” The ports revenues are collected by the Houthis.

U.S. President Joe Biden applauded the extension of the months-long truce. He urged the warring parties to seize the moment and reach a “conclusive, comprehensive agreement” to end the conflict.

Aid groups also welcomed the decision to renew the truce and called on Yemeni leaders to see it as an opportunity for more serious work towards peace to be done.

“We hope this two-month extension will allow for the reopening of roads linking cities and regions, enable more displaced people to return to their homes safely, and ensure humanitarian aid can reach people who have been out of reach for far too long because of hostilities,” said Erin Hutchinson, Yemen director for the Norwegian Refugee Council in a statement.

Mohammed Abdulwasea, advocacy manger for the Oxfam charity, called to the implementation of all terms of the truce and to achieve permanent peace. “Now is the time for all parties — and the international community — to work towards a lasting and inclusive peace.” he said.

Tuesday's extension fell short of a proposed six-month renewal of the cease-fire, according to a government official. The Houthis had wanted more flights from Sanaa airport and more fuel vessels allowed to arrive in Hodeida to agree on that longer period. The internationally recognized government would not discuss the Houthi demands before the opening of Taiz roads, the official said. He spoke on condition anonymity to discuss internal deliberations.

On Sunday, U.S. Secretary of State Antony Blinken spoke with Rashad al-Alimi, head of the presidential government, to press for the truce renewal. He said the cease-fire “provides the best opportunity for peace in years — we must not let it slip away.”