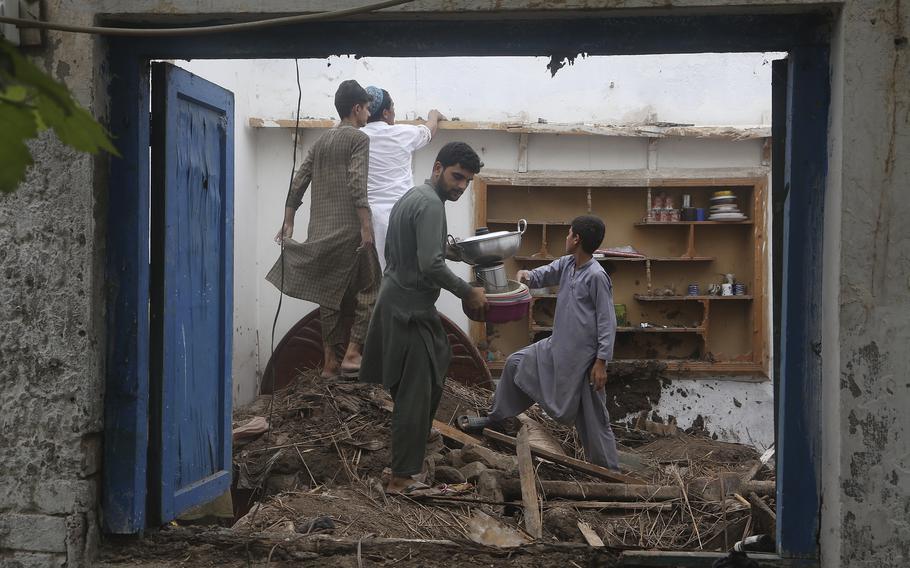 People salvage usable items from their house, after the roof collapsed due to heavy rains, in Peshawar, Pakistan, Thursday, July 28, 2022. The National Disaster Management Authority said Wednesday that 337 people died across the country in rain-related incidents. (Muhammad Sajjad/AP)

ISLAMABAD — A Pakistani army helicopter flying in a rescue and relief mission in the country's flood-stricken southwest lost contact with a regional control tower and was missing late Monday, the military said.

The fate of its six-member crew, including a top commander, was not immediately known. The helicopter was part of aid efforts in the flood-affected southwestern Baluchistan province.

The military said a search was underway for the aircraft, without saying whether it had crashed. The regional commander on board, Lt. Gen. Sarfraz Ali, was supervising relief operations in the flood-affected southwest.

The development came hours after authorities said flash floods triggered by heavy monsoon rains have killed 140 more people over the past week. The fatalities raised the overall death toll from rain-related incidents since June to 478 in Pakistan.

Rescue workers backed by the military have evacuated thousands of marooned people, including women and children, from the southwestern Baluchistan province, in the northwest and elsewhere since last week, when the government deployed helicopters to expand ongoing relief and rescue operations.

Deluges have completely destroyed or damaged nearly 37,000 homes in the flood-hit areas since June 14, according to a report released by the National Disaster and Management Authority.

On Monday, Prime Minister Shahbaz Sharif visited Baluchistan, and in a televised speech promised financial support to those who have lost their homes in the floods. More rains are expected this week in Pakistan, where the monsoon season runs from July through September.