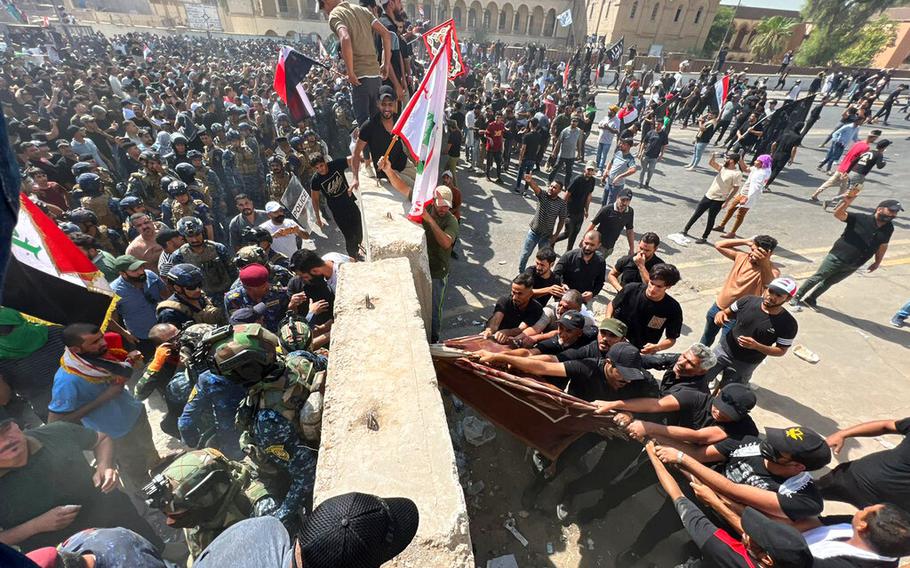 BAGHDAD — Thousands of followers of an influential Shiite cleric stormed into Iraq's parliament on Saturday, for the second time this week, protesting government formation efforts lead by his rivals, an alliance of Iran-backed groups.

The alliance showed signs of internal division, with some calling for counter-protests — a development that would raise the specter of civil strife — while others later urged for dialogue.

Iraqi security forces initially used tear gas and stun grenades to try to repel the demonstrators, who are followers of cleric Muqtada al-Sadr. Once inside, the protesters declared an open-ended sit-in and claimed they would not disperse until their demands are answered.

As the numbers of protesters swelled, the police backed off. An expected parliament session did not take place and no lawmakers were in the hall. By late afternoon, the Ministry of Health said about 125 people were injured in the violence — 100 protesters and 25 members of the security forces.

Earlier in the day and heeding al-Sadr's calls, the demonstrators used ropes and chains to pull down cement barricades leading to the gate of Baghdad's heavily fortified Green Zone, which houses government buildings and embassies.

The development showed al-Sadr was using his large grassroots following as a pressure tactic against his rivals, after his party was not able to form a government despite having won the largest number of seats in the federal elections held last October.

With neither side appearing willing to concede, and al-Sadr intent on derailing government formation efforts lead by his rivals, Iraq's limbo and political paralysis has ushered in a new era of instability in the beleaguered country.

Al-Sadr has used his followers as leverage against rivals and ordered them to occupy the parliament in the past — as in 2016, during the administration of Prime Minister Haidar al-Abadi.

Now, 10 months since the last elections, the political vacuum is shaping up to be the longest since the U.S.-led 2003 invasion to oust Iraqi dictator Saddam Hussein had reset the country's political order.

Al-Sadr's rivals in the Coordination Framework — an alliance of Shiite parties backed by Iran and lead by former Prime Minister Nouri al-Maliki — showed signs of internal divisions later on Saturday.

At first, the alliance called for "peaceful" counter-protests to defend the state, raising fears of possible street clashes and inter-ethnic violence.

"Civil peace is a red line and all Iraqis must be prepared to defend it in all possible, peaceful, means," the alliance said. Three Shiite officials said this statement was written by al-Maliki and militia leader and political figure Qais al-Khazali.

Later, Hadi al-Amiri, also an alliance leader, issued a statement inviting our "dear brother" al-Sadr to "a serious dialogue" to find a way out of the impasse. Al-Maliki appeared to pivot also and issued a statement saying the day's tumultuous events had prompted him to call for dialogue with al-Sadr.

Al-Maliki is al-Sadr's chief rival and both men are powerful in their own right.

The United Nations expressed its concern of further instability and called on Iraqi leaders to de-escalate. "Voices of reason and wisdom are critical to prevent further violence. All actors are encouraged to de-escalate in the interest of all Iraqis," the U.N. said.

"The political blocs must sit down and negotiate and reach an understanding for the sake of Iraq and the Iraqis," he said and ordered security forces to protect demonstrators.

Shiite leader Ammar al-Hakim — who is allied with the Framework but has announced he would not participate in the next government — echoed al-Kadhimi's words and called for both sides to make concessions to avoid "the irreplaceable loss of the homeland."

Throughout the day, al-Sadr supporters — many had come not just from Baghdad but other provinces as well in order to stage the sit-in — continued to throng the parliament building, raising the Iraqi flag and portraits of al-Sadr. They chanted against the intrusion of foreign states, a veiled reference to Iran.

It was the second time in four days that the cleric ordered his followers to take their cause inside the Green Zone. On Wednesday, after protesters stormed the parliament in a similar fashion, they left shortly after getting inside, at al-Sadr's command.

Wednesday's show of force came after al-Sadr's rivals had made a step forward in their government formation efforts by naming Mohammed al-Sudani as their nominee for the premiership.

Inside the parliament, as the day unfolded, the defenses of the security forces grew less intense and many were seen sitting and conversing with demonstrators. Later, some protesters began moving from the parliament toward the Judicial Council building.

"We came today to remove the corrupt political class and prevent them from holding a parliament session, and to prevent the Framework from forming a government," said Raad Thabet, 41. "We responded to al-Sadr's call."

Al-Sadr's party left the government formation talks in June, giving his rivals in the Coordination Framework the majority they needed to move forward with the process.

Many protesters wore black to mark the days leading to Ashura, which commemorates the death of Imam Hussein, the grandson of the Prophet Mohamed and one of Shiite Islam's most important figures. Al-Sadr's messaging to his followers has used the important day in Shiite Islam to kindle protests.

It's unclear to what extent Saturday's events could derail efforts to muster enough support for al-Sudani's bid for premiership. Al-Maliki had wanted the premier post himself, but audio recordings were leaked in which he purportedly cursed and criticized al-Sadr and even his own Shiite allies, which effectively sank his candidacy.