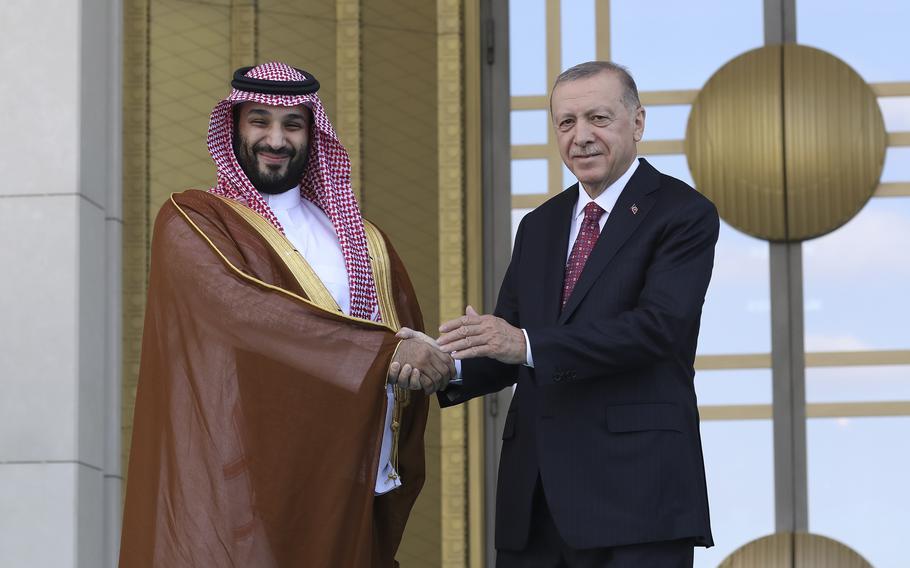 ANKARA, Turkey — Turkey and Saudi Arabia on Wednesday declared their determination to start a "new era of cooperation" during a visit by Saudi Crown Prince Mohammed bin Salman, as they set aside years of acrimony following the brutal slaying of a Saudi columnist.

The Turkish fiancée of the slain journalist meanwhile, decried the crown prince's visit.

Prince Mohammed — making his first trip to Turkey following the killing, by Saudi agents, of Jamal Khashoggi at the kingdom's consulate in Istanbul — held one-on-one talks with President Recep Tayyip Erdogan that lasted some two hours. Prince Mohammed is on the last leg of a Middle East tour that also took him to Egypt and Jordan.

A joint statement released followed their meeting said the sides "strongly emphasized a joint determination to start a new era of cooperation in bilateral relations ... including political, economic, military, security and cultural relations."

The two sides also discussed the possibility of developing and diversifying trade and boosting investments and partnerships in various fields. The talks were held in an atmosphere of "sincerity and brotherhood embodying the depth of excellent relations between the two countries," according to the statement.

The crown prince's convoy arrived at the presidential palace complex escorted by Turkish mounted honor guards. Erdogan greeted the prince at an entrance to the palace after which the two kissed each other on both cheeks.

Efforts by the regional heavyweights to improve their ties come as Turkey faces its worst economic crisis in two decades and is trying to draw investments from wealthy Gulf Arab states. Turkey has also taken steps to improve relations with the United Arab Emirates, Egypt and Israel.

Saudi Arabia, for its part, has been trying to broaden its alliances at a time of strained relations with Washington. The crown prince also seeks to put an end to the scandal over Khashoggi's killing that damaged his reputation.

U.S. President Joe Biden is due to visit Saudi Arabia at the tail end of a July 13-16 regional trip that includes stops in Israel and the occupied West Bank.

Erdogan visited Saudi Arabia in April, paying his first visit to the kingdom since 2017, a year before Khashoggi's killing.

He said it could also serve to mediate between Egypt and Turkey, which are working toward reconciliation after their relations broke down over Turkey's strong opposition to the ouster of former Egyptian President Mohamed Morsi.

"Bilateral trade is likely to increase, and there is a good chance that Saudi tourism flows to Turkey will resume," Kamel wrote. "Talks could also involve military/defense cooperation or arms procurement, as the Saudis are interested in exploring diversifying their suppliers."

The killing in the consulate sparked global outrage and put pressure on Prince Mohammed, who was said to have approved the operation to kill or capture the journalist, according to a U.S. intelligence assessment. The prince has denied any knowledge of the operation that was carried out by agents who worked directly for him.

While never naming the crown prince, Erdogan has said the operation that killed Khashoggi was ordered by the "highest levels" of the Saudi government.

Khashoggi entered the consulate to obtain papers to allow him to wed his fiancée, Hatice Cengiz, who waited for him outside. He never emerged and his body was never found.

Cengiz said she welcomed the improvement in Saudi and Turkish relations but opposed Prince Mohammed getting welcomed to Ankara before Khashoggi's killers were brought to justice.

"As someone who has been wronged, I find it very heartbreaking," Cengiz told The Associated Press in a written response to questions. "I object to this. Jamal's body is still missing. I am devastated that this has gone unanswered and that those who killed him remain unpunished."

Turkey opened a trial in absentia against 26 Saudis suspected in Khashoggi's killing, but the court earlier this year ruled to halt the proceedings and transfer the case to Saudi Arabia, paving the way for the countries' rapprochement.

"An apology should have been made both to my country and to me," Cengiz said.

She also was critical of Biden's plans to visit Saudi Arabia.

"Forgetting all the promises he made, he is now taking steps for his own country's interests. He is violating the values that he believes in," Cengiz said. "With this visit, he is making the whole world question his sincerity."