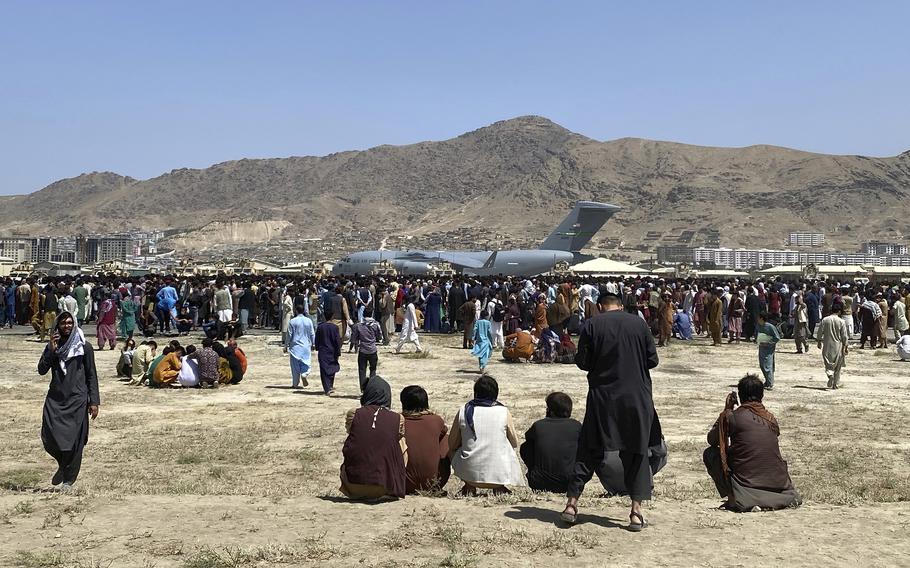 Hundreds of people gather near a U.S. Air Force C-17 transport plane at the perimeter of the international airport in Kabul, Afghanistan, on Aug. 16, 2021. The independent watchdog for U.S. assistance to Afghanistan is accusing the State Department and U.S. Agency for International Development of illegally withholding information from it about the American withdrawal from the country last year. (Shekib Rahmani/AP)

WASHINGTON — The congressionally mandated watchdog for U.S. assistance to Afghanistan is accusing the State Department and U.S. Agency for International Development of illegally withholding information from it about the American withdrawal from the country last year and current policy.

Amid a spat over what the Biden administration believes to have been an overly critical report about the American pullout, the Special Inspector for Afghanistan Reconstruction, John Sopko, said the State Department and USAID were refusing to cooperate with his staff in violation of the law that created the office.

The allegations were made by in separate letters from Sopko to lawmakers and to Secretary of State Antony Blinken and USAID Administrator Samantha Power, and by Sopko's general counsel to the top lawyers for each agency. The letters were obtained by The Associated Press.

The State Department did not deny it had cut off cooperation with the watchdog. But it complained that the special inspector had not given the administration a chance to respond to its latest report covering the withdrawal that was released last month.

The department said the report was unfairly negative and did not represent the administration's view of the events surrounding the collapse of the Afghan government and the Taliban takeover.

In his letters, Sopko was blunt, seeking immediate action from Congress, Blinken and Power to restore the cooperation his office has had with their agencies in the past.

"I respectfully request that you direct State and USAID officials to cease their illegal obstruction of SIGAR's oversight work and to provide the requested information and assistance without further delay," he wrote to Blinken and Power.

Sopko said his staff had requested numerous documents and interviews with officials who were involved in the chaotic withdrawal and aftermath last July but had been stonewalled for several months. He said those requests involved information about the evacuation and resettlement of Afghan nationals as well as ongoing humanitarian aid and questions about whether that assistance might be transferred to the Taliban.

"It is now evident that offices and staff who have cooperated with similar requests in the past were being silenced or overruled by officials opposed to SIGAR's independent oversight," Sopko wrote.

The State Department said both it and USAID remain committed to assisting SIGAR's mission and would respond to the watchdog's allegations. But the department said it "had concerns about how some of SIGAR's requests for information relate to their statutory jurisdiction."

The department said it had responded to a SIGAR complaint in April by pointing out that much of the information it was requesting was already being provided to Congress and an internal review of Afghanistan policy being conducted by all agencies in the administration.

State Department spokesman Ned Price did not have a direct response to the allegations in Sopko's letters but voiced the administration's unhappiness with SIGAR's last report, which concluded that the withdrawal had been poorly managed and that the collapse of the Afghan government and military had not been correctly predicted.

In addition, Price said the special inspector did not seek State Department input while drafting the April report and did not give the department the opportunity to review the draft before it was published.