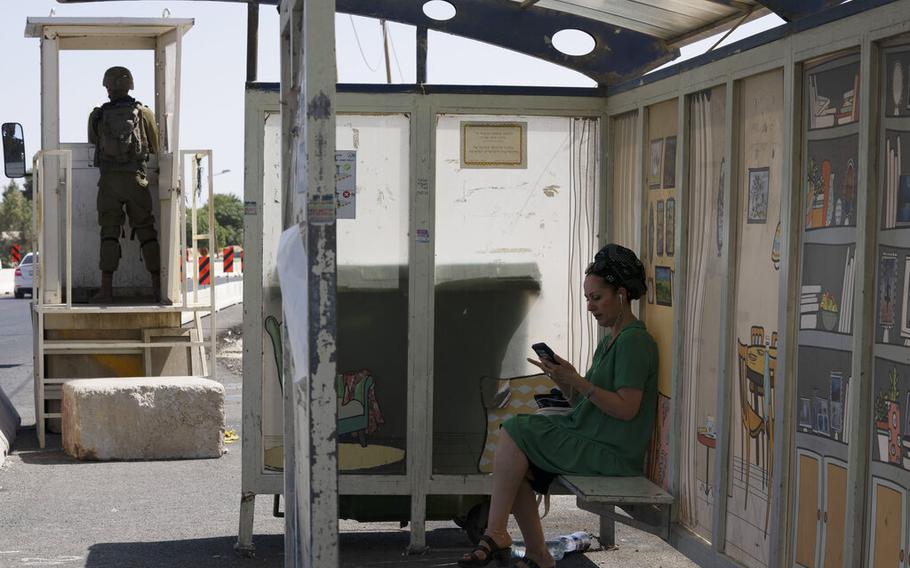 An Israeli soldier stands guard at a bus stop as a woman waits for a bus at the Gush Etzion junction, the transportation hub for a number of West Bank Jewish settlements, Thursday, June 9, 2022. Israeli forces shot and killed a Palestinian man on Sunday, the Palestinian Health Ministry said, after the Israeli military said he tried to illegally cross the separation barrier that divides Israel and the occupied West Bank. (Maya Alleruzzo/AP)

TEL AVIV, Israel — Israeli forces shot and killed a Palestinian man on Sunday, the Palestinian Health Ministry said, after the Israeli military said he tried to illegally cross the separation barrier that divides Israel and the occupied West Bank.

In a statement, the military said soldiers saw the man "sabotaging" the barrier outside the West Bank city of Qalqilya and "attempting to illegally cross into Israeli territory." Forces opened fire to get him to stop and shot him, the statement said.

The Palestinian Health Ministry said forces killed the man, identified as Nabil Ahmed Salim Ghanem from the West Bank city of Nablus, near the barrier. The official Palestinian news agency Wafa said he was 53 years old. No other details were immediately available.

Thousands of Palestinians cross into Israel from the West Bank illegally through holes in the barrier, much of which is a towering wall but is also made up of fences prone to being damaged. Many work as day laborers and earn salaries much higher than those in the West Bank.

Israelis have been keenly focused on the illegal entry of Palestinians over recent months following a spate of attacks by Palestinians who snuck into Israel before carrying out killing sprees. Authorities, who have long turned a blind eye, have pledged to seal the breached parts and replace the fences with concrete walls.

Israel says the barrier helped stop a wave of suicide bombings and other attacks by Palestinians who slipped into the country during the 2000-2005 uprising and is still needed to prevent deadly violence.

But the barrier also repeatedly juts into the West Bank and the Palestinians view it as an illegal land grab. The International Court of Justice in 2004 said the barrier was "contrary to international law."