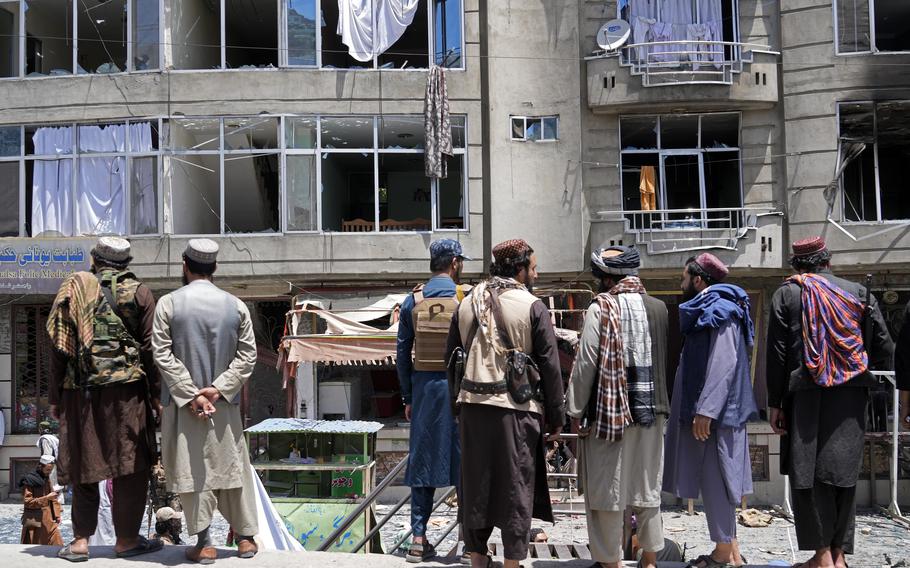 ISLAMABAD — The Islamic State group claimed responsibility for an attack on a Sikh temple in Afghanistan's capital of Kabul that killed at least one worshipper and wounded seven others.

ISIS made the claim in a statement posted on its Amaq website late Saturday. It said the assault on "the Sikh and Hindu temple" was in response to alleged insults made against the Prophet Muhammad, the central figure of the Islamic religion, by an Indian government official. It did not name the official.

Gunmen attacked the Sikh house of worship, known as a gurdwara, Saturday morning and a firefight between the attackers and Taliban fighters seeking to protect the building ensued, Afghan officials said.

A vehicle filled with explosives was detonated outside of the temple but that resulted in no casualties. Before that, the gunmen threw a hand grenade that caused a fire near the temple's gate, the officials said

ISIS said Abu Mohammed al-Tajiki, a member of the group, stormed the temple after killing the guard and then targeted the people inside with machine-gun fire and hand grenades. ISIS fighters outside the temple detonated four explosive devices and a car bomb targeting patrols of Taliban militia who tried to protect the temple. The battle ended after three hours, the Amaq report said.

The Sikh Coalition, the largest Sikh civil rights organization based in the United States, said the gurdwara was significantly damaged by the attack.

"The recurring tragic violence targeting the Afghan Sikh community is devastating, but also entirely predictable and preventable," said Anisha Singh, the group's executive director, in a statement late Saturday. "The international community, and in particular the United States, continues to fall short of urgently-needed efforts to protect and safely resettle all Afghan Sikhs and Hindus."

Videos posted on social media showed plumes of black smoke rising from the temple in Kabul's Bagh-e Bala neighborhood and gunfire could be heard.

Kabul police said the gunfight with the militants ended after the last attacker was killed several hours after the assault began. They said one Sikh was killed and seven others were wounded in the attack and a Taliban security force was killed during the rescue operation. It was unclear how many ISIS militants were involved or how many were killed in the gun battle with the Taliban.

Earlier this month, Indian officials held talks with the Taliban in Kabul for the first time since the group took control of the country last year on the distribution of humanitarian aid. The Indian delegation was led by J.P. Singh, a secretary in the External Affairs Ministry.

It wasn't immediately clear whether J.P. Singh was the "Hindu" ISIS referred to in its statement or what comments he might have made that provoked the ISIS attack. It was also unclear why the extremist organization would target a Sikh temple in retaliation for comments made by an Indian official.

Modi added, "I condemn this barbaric attack, and pray for the safety and well-being of the devotees"

An Islamic State group affiliate, known as Islamic State in Khorasan Province or ISIS-K, has been operating in Afghanistan since 2014. It is seen as the greatest security challenge facing the country's Taliban rulers, who seized power in Kabul and elsewhere in the country last August. They have launched a sweeping crackdown against ISIS in eastern Afghanistan.

In March 2020, a lone ISIS gunman rampaged through a different Sikh temple in Kabul, killing 25 worshippers, including a child, and wounding eight others. As many as 80 worshippers were trapped inside the gurdwara as the gunman lobbed grenades and fired an automatic rifle into the crowd.

The Sikh Coalition has advocated for the resettlement of Afghan Sikhs and Hindus since the 2020 attack. During his presidential campaign, President Joe Biden supported resettlement for these families. Lawmakers on both sides of the aisle in the House and Senate also advocated for resettlement. Despite these shows of support, however, little has been done to help Afghan Sikhs and Hindus to leave the country or assist those temporarily evacuated to nations including India.

There were less than 700 Sikhs and Hindus in Afghanistan at the time of the 2020 attack. Since then, dozens of families have left but many cannot financially afford to move and have remained in Afghanistan, mainly in Kabul, Jalalabad and Ghazni.