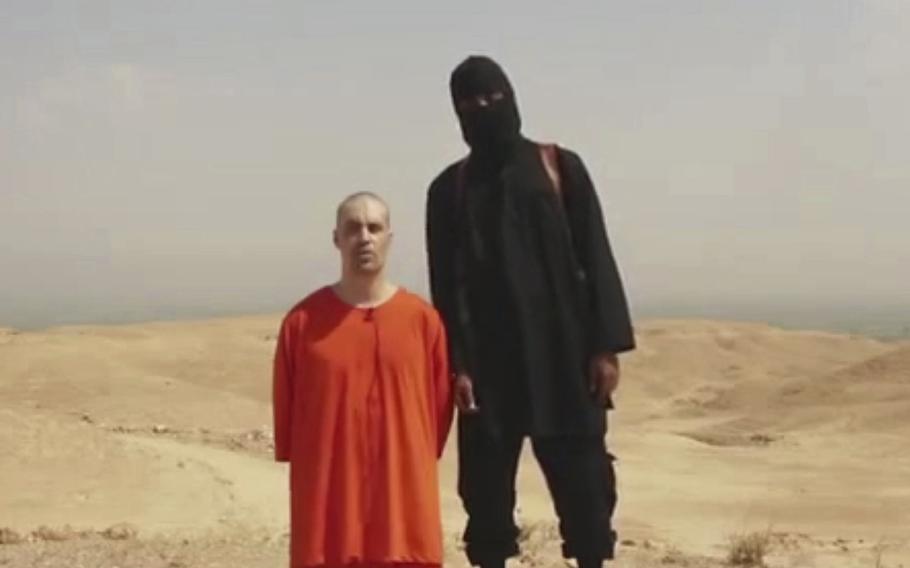 A screen grab from a video released by Islamic State militants on Aug. 19, 2014, purports to show journalist James Foley before he was killed. The family of slain American journalist Steven Sotloff filed a federal lawsuit Friday, May 13, 2022, accusing prominent Qatari institutions of wiring $800,000 to an Islamic State “judge” who ordered Sotloff’s and Foley’s murders. (Militant website via AP)

Qatar, a key U.S. ally in the Persian Gulf, is facing increased scrutiny over its alleged financial ties to terrorism in a lawsuit from relatives of a slain American journalist and a separate federal investigation into a member of the country's royal family.

The family of Steven Sotloff alleged in a federal lawsuit Friday that prominent Qatari institutions wired $800,000 to an Islamic State "judge" who ordered the murder of Sotloff and another American journalist, James Foley. The two were beheaded in Syria in 2014, their killings filmed and published in grisly propaganda videos.

"We want to do everything we can to make sure no other family has to suffer what we have suffered," the Sotloff family said in a statement explaining their lawsuit. 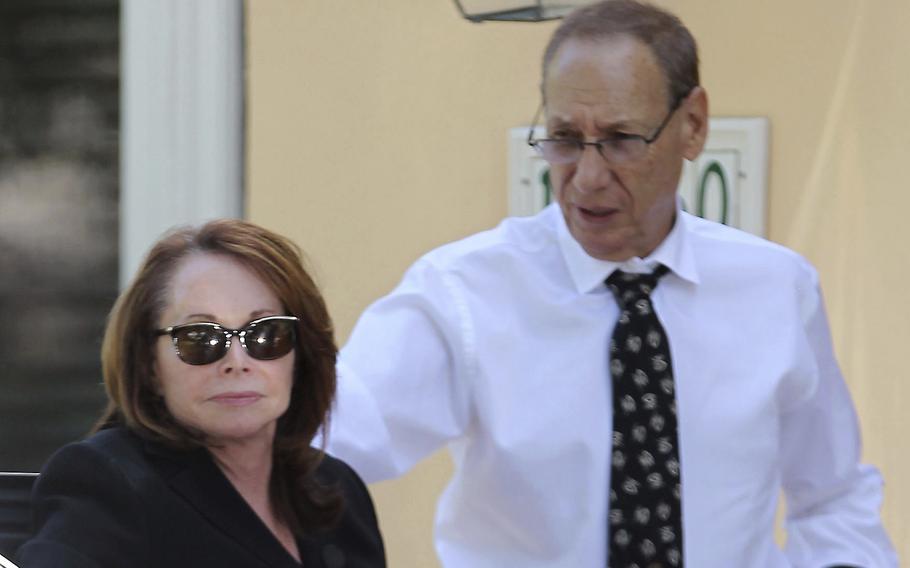 Shirley Sotloff and her husband, Arthur B. Sotloff, exit a car as they return home after a memorial service for their son, slain journalist Steven Sotloff, at Temple Beth Am, on Sept. 5, 2014, in Pinecrest, Fla. The Sotloff family filed a federal lawsuit Friday, May 13, 2022, accusing prominent Qatari institutions of wiring $800,000 to an Islamic State “judge” who ordered Steven Sotloff’s and Foley’s murders. (Carl Juste/Miami Herald via AP)

Separately, federal prosecutors have been investigating potential ties between terror groups and Khalid bin Hamad Al-Thani, the half-brother of Qatar's ruling emir, according to documents reviewed by The Associated Press and interviews with two people familiar with the investigation.

A grand jury investigation, run out of the Southern District of New York, has focused in part on whether Khalid Al Thani provided money and supplies to Al Nusra, al-Qaeda's branch in Syria, said the two people. They spoke on condition of anonymity because they were not authorized to discuss the matter publicly.

Qatar has enjoyed a strong relationship with the Biden administration. The world's wealthiest country per capita played a key role in evacuations from Afghanistan and its huge supplies of natural gas could help sustain Europe's energy markets amid Russia's war in Ukraine. Qatar could also play a critical role in President Joe Biden's bid to revive a nuclear deal with Iran.

The Qatari Embassy said it needed more information before it could comment about the reported investigation, and did not immediately comment on the lawsuit.

Earlier this year, Biden designated Qatar a major non-NATO ally, a move that could be helpful in the country's bid to get U.S. approval for a more than $500 million sale of MQ-9 Reaper drones. Qatar is home to the largest U.S. Air Force base in the Gulf.

"Qatar is a good friend and a reliable partner," Biden said in January while hosting Qatar's ruling emir, Tamim bin Hamad Al-Thani, at the White House.

But Qatar, which was one of the strongest international backers of the rebellion against Syrian President Bashar Assad, has long faced criticism from some U.S. officials for allowing or encouraging funding of extremists groups in Syria, as well as for its direct and indirect support of the Muslim Brotherhood and Hamas.

Qatar has said it condemns terrorism, but officials have also conceded its efforts may have helped the wrong people.

"Look, in Syria, everybody did mistakes, including your country," Hamad bin Jassim Al-Thani, Qatar's former prime minister and foreign minister, said in a 2017 interview with American journalist Charlie Rose. He added that Qatar had never intentionally funded extremists groups in Syria and had cut off funding to any group it learned had another "agenda."

Lawyers for the Sotloff family said in the lawsuit that Qatari officials either "knew or recklessly ignored" the fact that the Islamic State terrorists they were allegedly funding would target Americans for kidnapping, torture and murder.

Specifically, the lawsuit says the charity and the bank provided $800,000 to Fadel al Salim, which he allegedly smuggled into Syria from Turkey and then used to form a "brigade of Islamic State fighters" and become a "sharia judge." 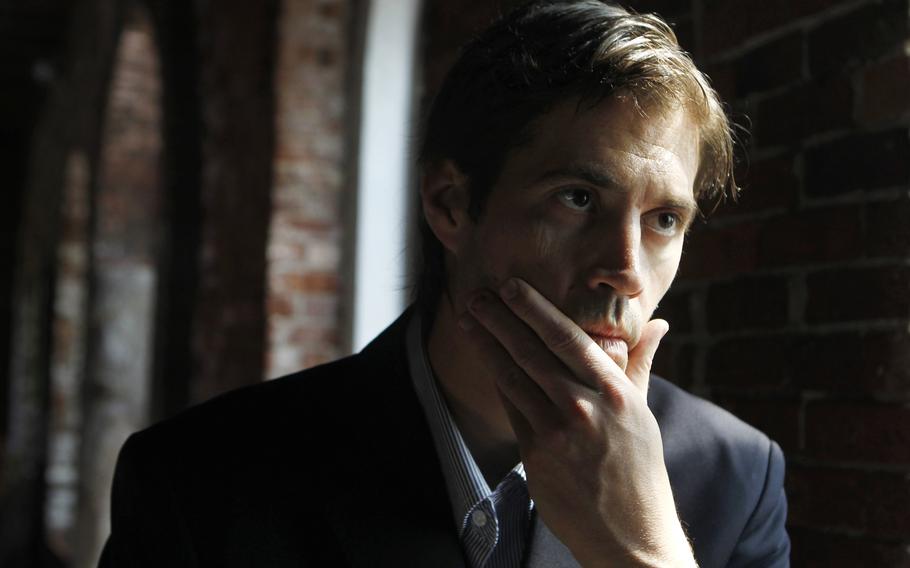 Journalist James Foley responds to questions during an interview in Boston on Friday, May 27, 2011. The family of slain American journalist Steven Sotloff filed a federal lawsuit Friday, May 13, 2022, accusing prominent Qatari institutions of wiring $800,000 to an Islamic State “judge” who ordered Sotloff’s and Foley’s murders. (Steven Senne/AP)

The Sotloff complaint said al Salim signed the "Legal Retribution Verdict" ordering the deaths of Foley and Sotloff as well as led a convoy that transported the pair from one prison in Raqqa, Syria, to the town where they were slain.

Representatives for Qatar Charity and Qatar National Bank did not immediately respond to requests for comment.

The current whereabouts of al Salim are unknown. But U.S. prosecutors have made significant progress in separate criminal cases against two of the British Islamic State militants responsible for the killings of Sotloff and three other American captives.

Alexanda Kotey was sentenced recently in federal court in Alexandria, Virginia, to life in prison. El Shafee Elsheikh, who was convicted in a jury trial last month, also faces life imprisonment when he is sentenced in August.

Kotey and Elsheikh were part of a cell of British militants known by their captors as "the Beatles" because of their accents. They were captured in Syria in 2018 and transferred to the U.S. in 2020 for criminal prosecution after Attorney General William Barr agreed to take the death penalty off the table.

Another militant, Mohammed Emwazi — known as "Jihadi John" — was killed in a U.S. drone strike in 2015 and a fourth was arrested in Turkey.

Sotloff, Foley and Peter Kassig were beheaded as part of propaganda videos released by IS in 2014 while Kayla Mueller was tortured and raped by Islamic State leader Abu Bakr Al-Baghdadi before she was killed. The hostage-taking also resulted in the killings of British and Japanese captives, officials have said.

"We are forever broken by the loss of our beloved son, and defined as the people from a horror movie," mother Shirley Sotloff said at the Kotey sentencing hearing.

The Sotloff lawsuit, filed in West Palm Beach, Florida, does not disclose how information in the complaint was obtained. But it does include a high-level of detail, such as a specific bank account number, passages from a handwritten statement acknowledging payments and Islamic State judicial records.

The lawsuit also alleges Qatari royal family members and government officials worked with the Muslim Brotherhood and Turkish intelligence to fund extremist groups in Syria with the aim of undermining the Assad regime.

Similar allegations of prominent Qataris funding terrorist groups have been made in two ongoing lawsuits filed in London on behalf of Syrian refugees.

Ben Emmerson, a London-based lawyer representing the refugees, said there's clear evidence American officials have chosen to turn a blind eye to Qatar's terror financing in Syria because the U.S. needs Qatar's help in other areas.

"This is realpolitik in action," he said.

One of the London lawsuits alleges that Qatar National Bank board members made hawala payments -- an informal money transfer system -- directly to Al Nusra, al-Qaeda's branch in Syria. Those include transfers, according to the lawsuit, by the emir's half-brother, Khalid Al Thani. He previously served on the board of Qatar National Bank.

It's unclear if those payments are part of the grand jury investigation involving Khalid Al-Thani, which is at least a year old. Prosecutors from the Southern District of New York declined to comment.