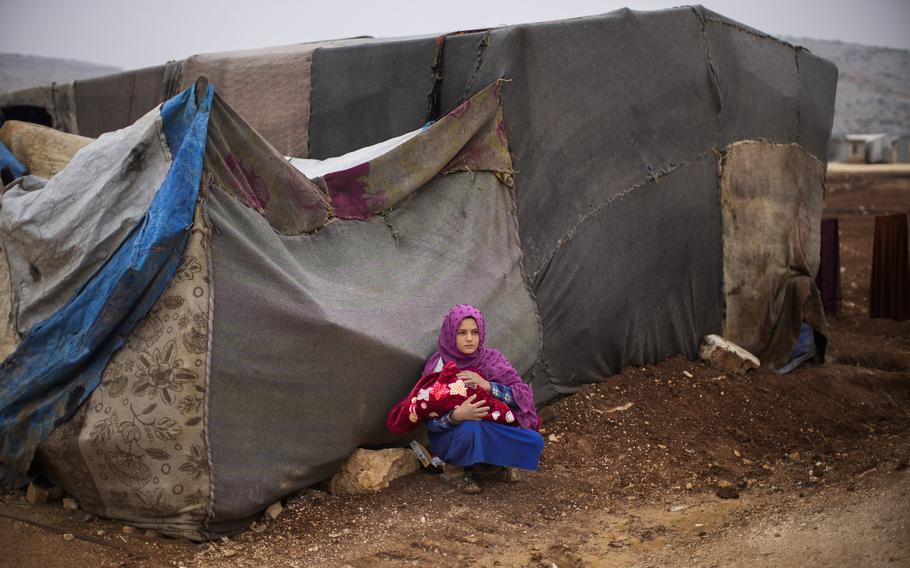 BEIRUT — Umm Khaled hardly leaves the tent where she lives in northwest Syria, and she says she doesn't pay attention to the news. But she knows one reason why it is getting harder and harder to feed herself and her children: Ukraine.

"Prices have been going up, and this has been happening to us since the war in Ukraine started," said the 40-year-old, who has lived in a tent camp for displaced people in the last rebel-held enclave in Syria for the past six years since fleeing a government offensive.

Food prices around the world were already rising, but the war in Ukraine has accelerated the increase since Russia's invasion began on Feb. 24. The impact is worsening the already dangerous situation of millions of Syrians driven from their homes by their country's now 11-year-old civil war.

The rebel enclave in Syria's northwest province of Idlib is packed with some 4 million people, most of whom fled there from elsewhere in the country. Most rely on international aid to survive, for everything from food and shelter to medical care and education.

Because of rising prices, some aid agencies are scaling back their food assistance. The biggest provider, the U.N. World Food Program, began this week to cut the size of the monthly rations it gives to 1.35 million people in the territory.

The Ukraine crisis has also created a whole new group of refugees. European nations and the U.S. have rushed to help more than 5.5 million Ukrainians who have fled to neighboring countries, as well as more than 7 million displaced within Ukraine's borders.

Aid agencies are hoping to draw some of the world's attention back to Syria in a two-day donor conference for humanitarian aid to Syrians that begins Monday in Brussels, hosted by the U.N. and the European Union. The funding also goes toward aid to the 5.7 million Syrian refugees living in neighboring countries, particularly Turkey, Lebanon and Jordan.

Last year, the EU, the United States and other nations pledged $6.4 billion to help Syrians and neighboring countries hosting refugees. But that fell well short of the $10 billion that the U.N. had sought — and the impact was felt on the ground. In Idlib, 10 of its 50 medical centers lost funding in 2022, forcing them to dramatically cut back services, Amnesty International said in a report released Thursday.

Across Syria, people have been forced to eat less, the Norwegian Refugee Council said. The group surveyed several hundred families around the country and found 87% were skipping meals to meet other living costs.

"While the humanitarian crisis in Ukraine continues to demand world attention, donors and governments meeting in Brussels must not forget about their commitment to Syria," NRC's Mideast Regional Director Carsten Hansen said in a report Thursday.

The U.N.'s children's agency UNICEF said more than 6.5 million children in Syria are in need of assistance calling it the highest recorded since the conflict began. It said that since 2011, over 13,000 children have been confirmed killed or injured.

Meanwhile, UNICEF said funding for humanitarian operations in Syria is dwindling fast, saying it has received less than half of its funding requirements for this year. "We urgently need nearly $20 million for the cross-border operations" in Syria, the agency said in a statement.

Umm Khaled is among those who rely on food aid. With her aid rations reduced, she has gone deeper in debt to feed her family.

Her husband and eldest son were killed in a Syrian government airstrike in their home city of Aleppo in 2016. Soon after, she escaped with her three surviving children to the rebel enclave in Idlib province. Ever since, they have lived in a tent camp with other displaced people on the outskirts of the town of Atmeh near the Turkish border.

Her family lives on two meals a day -- a small breakfast and a main meal late in the afternoon that serves as lunch and dinner. Her only income is from picking olives for a few weeks a year, making 20 Turkish liras ($1.35) a day.

"We used to get enough rice, bulgur, lentils and others. Now they keep reducing them," she said by telephone from the camp. She spoke on condition her full name is not made public, fearing repercussions. She lives with her two daughters, ages six and 16, and 12-year-old son, who suffered head and arm injuries in the strike that killed his brother and father.

The price of essential food items in northwest Syria has already increased by between 22% and 67% since the start of the Ukraine conflict, according to the aid group Mercy Corps. There have also been shortages in sunflower oil, sugar and flour.

Mercy Corps provides cash assistance to displaced Syrians to buy food and other needs and it says it has no plans to reduce the amount.

"Even before the war in Ukraine, bread was already becoming increasingly unaffordable," said Mercy Corps Syria Country Director, Kieren Barnes. The vast majority of wheat brought into northwest Syria is of Ukrainian origin, and the territory doesn't produce enough wheat for its own needs.

"The world is witnessing a year of catastrophic hunger with a huge gap between the resources and the needs of the millions of people around the world," said WFP spokeswoman Abeer Etefa.

In many of its operations around the world, WFP is reducing the size of the rations it provides, she said. Starting this month in northwest Syria, the provisions will go down to 1,177 calories a day, from 1,340. The food basket will continue to provide a mix of commodities, including wheat flour, rice, chickpeas, lentils, bulgur wheat, sugar and oil.

Rising prices have increased the cost of WFP's food assistance by 51% since 2019 and that cost will likely go even higher as the impact of the Ukraine crisis is felt, Etefa said.

Earlier in the year, before the Ukraine conflict began, a 29% jump in costs prompted the Czech aid agency People in Need to switch from providing food packages to giving food vouchers. The vouchers, worth $60, buy less food than the group's target level, but it had to take the step to "maximize its coverage of food assistance to the most vulnerable," a spokesperson told The Associated Press.

As the world turns to other conflicts, "Syria is on the verge of becoming yet another forgotten crisis," Assistant U.N. Secretary-General for Humanitarian Affairs Joyce Msuya warned in late April.

In northwest Syria, "a staggering 4.1 million people" need humanitarian aid, Msuya said — not just food, but also medicines, blankets, school supplies and shelter. She said almost a million people in the territory, mainly women and children, live in tents, "half of which are beyond their normal lifespan."

Many fear that the situation could only get worse in July, because Russia may force international aid for the northwest to be delivered through parts of Syria under the control of its ally, President Bashar Assad.

Currently, aid enters the Idlib enclave directly from Turkey via a single border crossing, Bab al-Hawa. The U.N. mandate allowing deliveries through Bab al-Hawa ends on July 9, and Russia has hinted it will veto a Security Council resolution renewing the mandate.

A Russian veto would effectively hand Assad control over the flow of aid to the opposition enclave and the U.S. and EU had warned earlier they will stop funding in that case.

The result will be a severe humanitarian crisis, likely triggering a new flood of Syrian migrants into Turkey and Europe, the German Institute for International and Security Affairs warned in a report.

Umm Khaled said she has no choice but to endure her deteriorating living conditions.

"They keep reducing our food basket," she said. "May God protect us if they cut it completely."