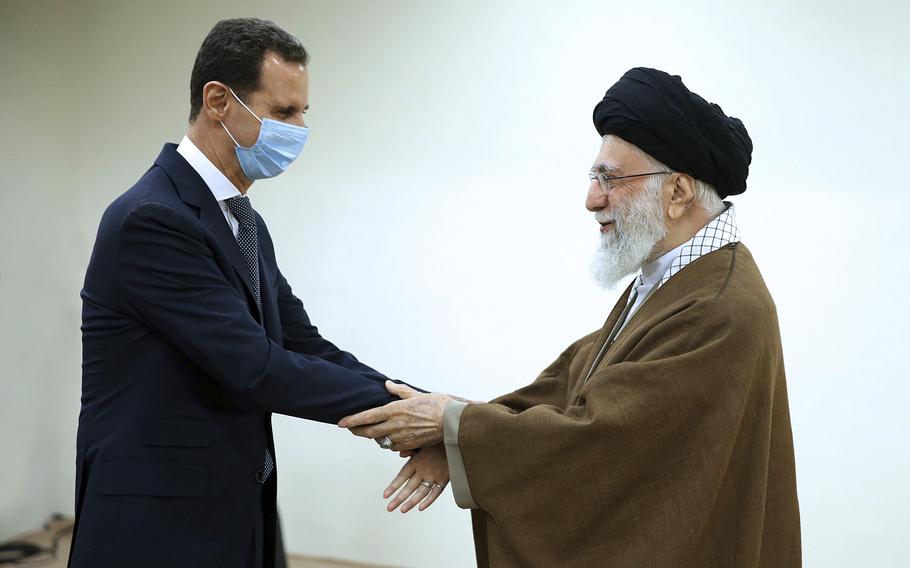 In this picture released by the official website of the office of the Iranian supreme leader, Supreme Leader Ayatollah Ali Khamenei, right, and Syrian President Bashar Assad shake hands at the start of their meeting, in Tehran, Iran, Sunday, May 8, 2022. Nour News, close to Iran’s security apparatus, said in the Sunday report that Assad met Khamenei and President Ebrahim Raisi earlier in the day. (Office of the Iranian Supreme Leader via AP)

"Everybody now looks at Syria as a power," Khamenei told Assad in the meeting, according to Iran's semiofficial Tasnim news agency, believed to be close to the country's powerful paramilitary Revolutionary Guard. "The respect and credibility of Syria is now much more than before."

Assad, for his part, said that strong relations between Iran and Syria served as a bulwark against American and Israeli influence in the Middle East.

"America today is weaker than ever," Syrian state news agency, SANA, quoted Assad as saying. "We should continue this track," he added, praising Iran's help in Syria's "fight against terrorism."

In an apparent reference to a recent string of deadly attacks in Israel by Palestinian assailants, Assad also said that the Palestinian cause has again captured the world's attention "because of the sacrifices of the Palestinian resistance."

Assad has rarely travelled abroad since his government's crackdown on Syria's civil unrest in 2011 led to a devastating civil war and made him a global pariah.

He has visited key patrons Russia and Iran, and made his first trip to the United Arab Emirates since the conflict earlier this year — the clearest signal yet that the Arab world is willing to re-engage with the once widely shunned president as Arab states seek to blunt the expanding influence of their Shiite foe in Syria.

Tehran has given the Syrian government billions of dollars in aid and sent Iran-backed fighters to battle alongside his forces — assistance that, along with Russian air power, has helped turn the tide in Assad's favor.

The Tehran visit marked Assad's first trip to the Iranian capital in over two years. The visit was not announced beforehand.

Police were out in force at major thoroughfares and intersections in Tehran on Sunday.