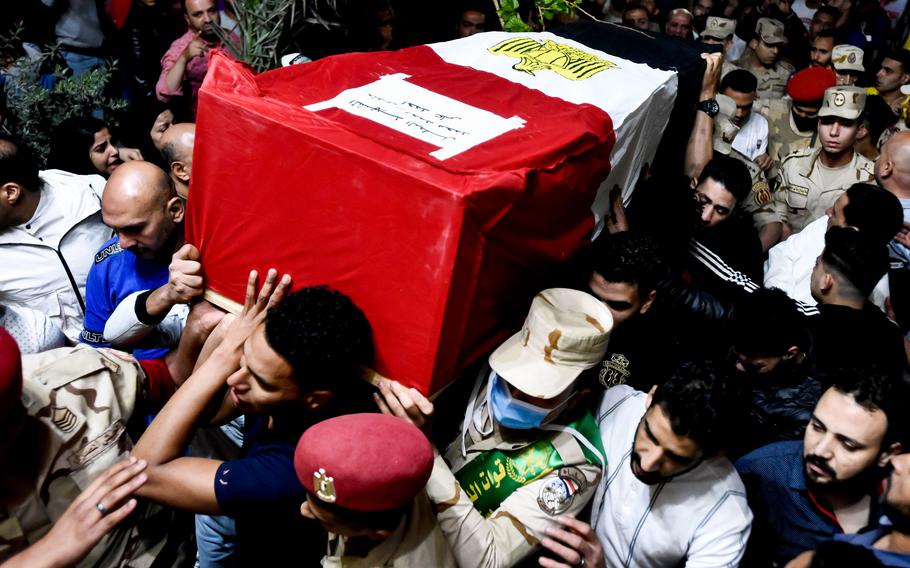 Men carry the coffin of soldier Ahmed Mohamed Ahmed Ali, who was killed in battle, during his funeral service, in Qalyubia province, Egypt, Sunday, May 8, 2022. At least 11 Egyptian troops, including an officer, were killed Saturday, May 7, 2022, in a militant attack on a water pumping station east of the Suez Canal, the military said. (Sayed Hassan/AP)

CAIRO — An Islamic State affiliate in Egypt on Sunday claimed responsibility for an attack that targeted a water pumping station east of the Suez Canal, killing at least 11 soldiers.

At least five other soldiers were wounded in Saturday's attack, according to the Egyptian military. It was one of the deadliest attacks on Egyptian security forces in recent years.

Thousands of people attended separate funerals for the dead on Sunday.

The extremist group announced its claim of the attack in a statement carried by its Aamaq news agency. The authenticity of the statement could not be verified but it was released on Telegram as similar claims have been in the past.

The attack took place in the town of Qantara in the province of Ismailia, which stretches eastwards from the Suez Canal.

Militants attacked troops at a checkpoint guarding the pumping facility, then fled the site. The military said troops were pursuing the attackers in an isolated area of the northern Sinai Peninsula.

Egypt is battling an Islamic State-led insurgency in the Sinai that intensified after the military overthrew an elected but divisive Islamist president in 2013. The militants have carried out scores of attacks, mainly targeting security forces and Christians.

The pace of militant attacks in Sinai's main theater of operations and elsewhere has slowed to a trickle since February 2018, when the military launched an extensive operation in Sinai as well as parts of the Nile Delta and deserts along the country's western border with Libya.