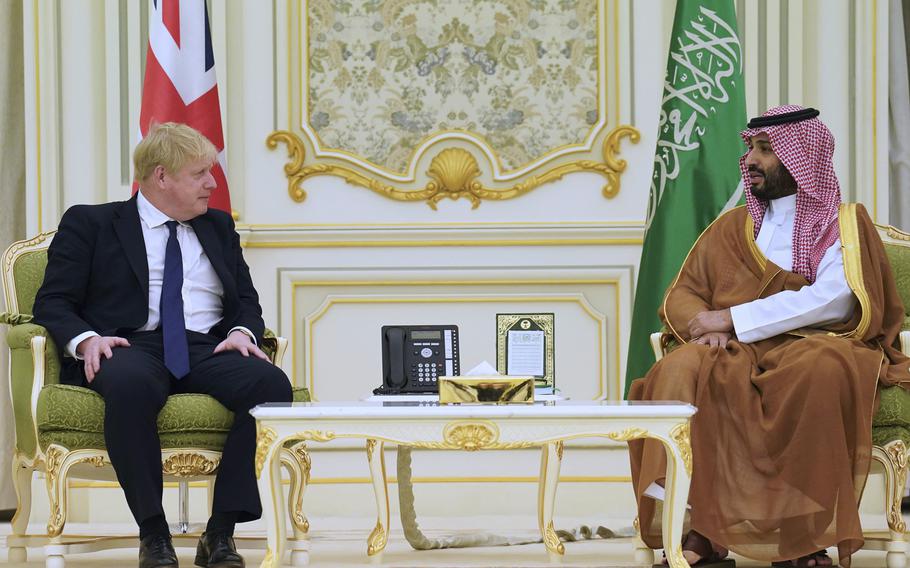 His visit is also aimed at pressing these two major OPEC producers to pump more oil, which would have an immediate impact on Brent crude oil prices that nearly touched $140 a barrel in trading last week. Prices have eased to around $100 in recent days, in large part due to new pandemic lockdowns in China.

Johnson told reporters after the meeting that the two had a “productive conversation” and agreed on the importance to fight oil price inflation, but he did not spell out whether Saudi Arabia was receptive to increasing oil production.

Earlier Wednesday, Johnson met with Abu Dhabi Crown Prince Mohammed bin Zayed for similar talks on energy supply amid the “chaos unleashed” by Russia’s invasion of Ukraine. He stressed “the importance of working together to improve stability in the global energy market” and ways to enhance energy ties, Downing Street said.

Johnson told reporters in Abu Dhabi that Russian President Vladmir Putin’s decision to invade Ukraine is “causing global uncertainty and a spike in the price of oil.”

Because of Europe’s reliance on Russian oil and gas, Putin has “been able to blackmail the West to hold Western economies to ransom,” he said, before stating: “We need independence.”

Pressing for an immediate release of more oil is a tall order to ask of Abu Dhabi and Riyadh, which are benefiting richly from high energy prices that boost their revenues and spending powers.

Ties between Western governments and Prince Mohammed also remain tarnished by the killing of Saudi writer Jamal Khashoggi. The prince has yet to hold a direct call with U.S. President Joe Biden, who is trying to revive Iran’s nuclear accord to the frustration of some Gulf states and Israel.

Saudi Arabia and the UAE have the spare capacity to pump more oil, but they’ve so far been unwilling to change course from a deal forged with Russia. The COVID-19 pandemic pushed down demand for oil, with Brent Crude prices averaging around $42 a barrel in 2020 before climbing to $70 last year on the back of an agreement by major oil producers to drastically curb production.

The deal, spearheaded by Saudi Arabia and Russia, calls for gradually increasing production levels each month as economies recover, but it did not account for the impact of the war in Ukraine, launched by Russia three weeks ago.

The UAE’s energy minister last week said the country is “committed to the OPEC+ agreement and its existing monthly production adjustment mechanism”. His statement followed a conflicting comment from the UAE’s ambassador in Washington, who seemed to suggest the UAE was in favor of releasing more oil on the market.

The Biden administration dispatched two officials last month to Riyadh to talk about a range of issues — chief among them global energy supplies. In a call with Biden prior to the visit, King Salman doubled down on “the importance of maintaining the agreement” that is in place between OPEC producers and Russia, according to a Saudi readout of the call.

Many U.K. lawmakers, including those in Johnson’s own Conservative party, have questioned the decision to turn to Saudi Arabia, citing its recent mass execution of 81 people on Saturday. The U.N. human rights chief said that just over half were Saudi Shiites who had taken part in anti-government protests a decade ago, calling for more rights. Some were executed after trials that failed to meet due process guarantees, said U.N. High Commissioner for Human Rights Michelle Bachelet.

Johnson told reporters that he raised human rights issues with Prince Mohammed and defended himself against criticism that he was going from one dictator to another in search of fuel sources. He claimed that the situation was improving in Saudi Arabia and that it’s important to engage with the country.