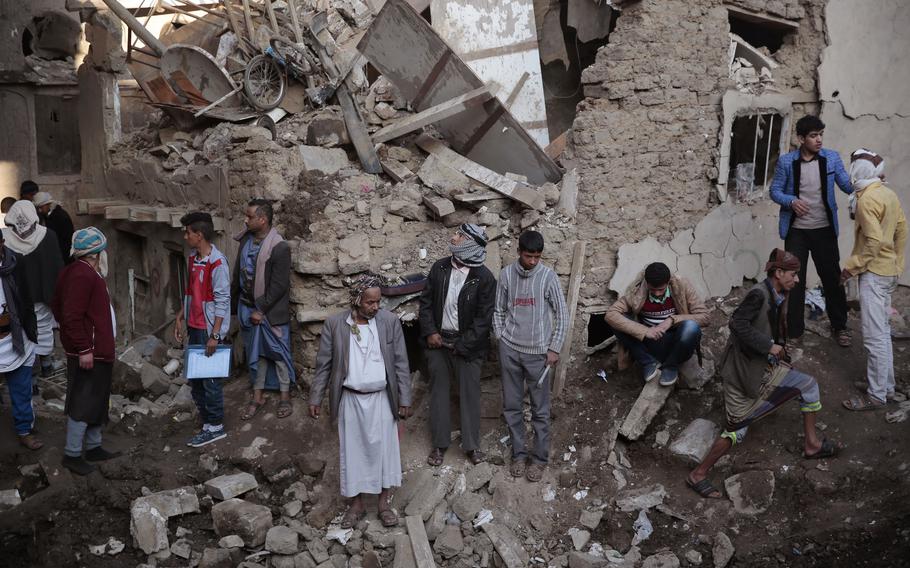 People gather at the site of a Saudi-led airstrike near Yemen’s Defense Ministry complex in Sanaa, Yemen, on Nov. 11, 2017. (Hani Mohammed/AP)

CAIRO — The United Nations is appealing for $4.27 billion for Yemen, the Arab world's poorest country, with 161,000 people likely to experience famine there in 2022.

The virtual pledging conference is co-hosted by Sweden and Switzerland to alleviate what the U.N. says is the word's worst humanitarian crisis.

"Two in three Yemenis — 20 million men, women and children -- live in extreme poverty," Secretary-General Antonio Guterres told donors from New York. "Today, we must do everything we can to bridge immediate funding gaps and strengthen aid delivery. We cannot cut people adrift from humanitarian aid."

The conference comes as world attention focuses on the war in Ukraine, which has overshadowed other humanitarian crises since the Russian invasion on Feb. 24 — raising concerns that that Yemen's plight may be forgotten. Over 3 million people have fled Ukraine, in Europe's largest exodus since World War II.

A prolonged conflict in Ukraine is likely to make it harder for Yemenis to meet their basic needs, as food prices, especially the cost of grain, are likely to increase. Yemen depends almost entirely on food imports, with 22% of its wheat imports coming from Ukraine, according to the World Food Program.

"The horrendous situation in Ukraine will have an indirect and direct impact on our ability to assist children in Yemen," said Philippe Duamelle, UNICEF's representative in Yemen. "Operations around the world will be more expensive."

Last year's conference raised only some $1.7 billion for Yemen, out of $3.85 billion the U.N. had appealed for as the coronavirus pandemic and its devastating consequences hit economies around the globe. The U.N. chief at the time called the 2021 result "disappointing."

However, the overall amount reached over $2.3 billion by the end of 2021, according to Guterres.

Secretary of State Antony Blinken said the U.S. will donate nearly $585 million in aid to Yemen this year. He also called for an end to the grinding war.

"We have to work relentlessly to bring the conflict to an end, knowing that as long as it goes on so will the humanitarian crisis," he said.

Yemen's war started in 2014 when the Iran-backed rebel Houthis seized the capital, Sanaa, and much of the country's north. A Saudi-led, U.S.-backed coalition intervened months later to dislodge the rebels and restore the internationally recognized government.

The conflict has in recent years become a regional proxy war that has killed more than 150,000 people, including over 14.500 civilians. The war has also created the world's worst humanitarian crisis, leaving millions suffering from food and medical care shortages and pushing the country to the brink of famine.

The majority of Yemen's roughly 32 million people live in Houthi-held areas. The rebels have for years been implicated in aid theft and withholding in extortion schemes.

U.N. experts earlier this year said they documented that the rebels provided or denied humanitarian aid to families "solely on the basis whether their children participated in fighting or to teachers on the basis of whether they taught the Houthi curriculum."

The U.N. Office for the Coordination of Humanitarian Affairs, or OCHA, has warned that a total of 19 million people are expected to face acute food insecurity by the second half of this year — an increase of around 20% compared to the first six months of 2021. About 161,000 people are likely to experience famine, it said.

OCHA said that half of the country's health facilities are shuttered or destroyed. It said the Yemeni currency, the rial, lost 57% of its value in 2021 in government-run areas, while persistent fuel shortages drove up the prices of food and other basic commodities in the Houthi-controlled north.

It said 4.3 million Yemenis have been driven from their homes; around one-fifth of newly displaced people in 2021 were in the energy-rich province of Marib which Houthis have attempted to seize for over a year, it said.

Ghalib al-Najjar and his family lives in the Dharwan camp on the outskirts the rebel-held Sanaa. The 48-year-old father, his wife, and seven children are at risk of famine amid price hikes and lack of humanitarian assistance.

"In the morning, half of us are fasting and I'm doing my best to provide food - if available - to the others," he said in a recent interview. "We live like ants on the ground or fish in the sea. We eat what we find on our way."

The conference comes as peace efforts stall, with fighting escalating since the beginning of 2022. The Saudi-led coalition has stepped up its support to government ground forces to fend off the Houthis' offensive on Marib. Clashes have also intensified elsewhere, and the Houthis accelerated their cross-border attacks on Saudi Arabia and the United Arab Emirates.

Speakers from around the globe called on warring parties to de-escalate.

"We must address the underlying drivers of humanitarian need, break the cycle of violence, and change Yemen's trajectory," the U.N. chief said. "Allowing the war to continue is a choice. So is ending it. I appeal to the parties to choose peace."