WFP director for Afghanistan warns of ‘tsunami of hunger’ 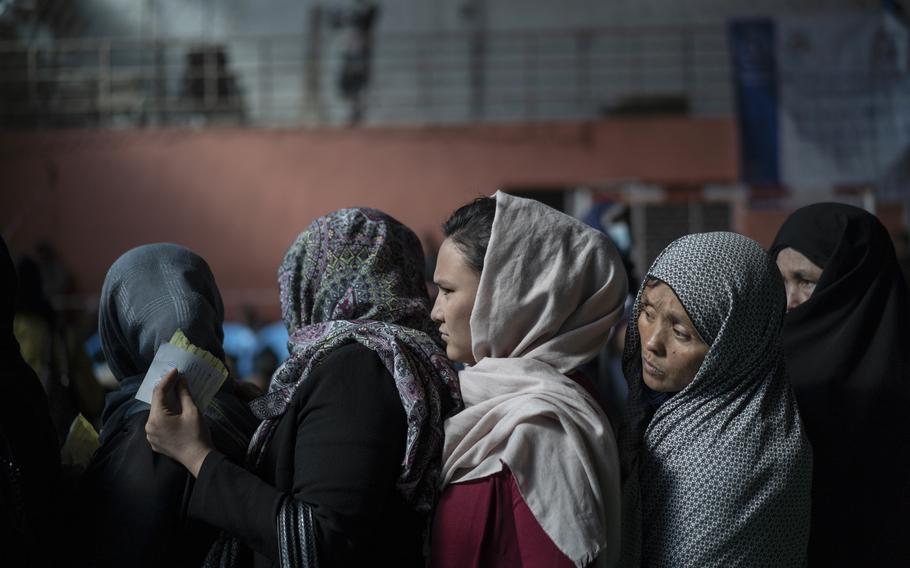 People wait in lines to receive cash at a money distribution site organized by the World Food Program in Kabul, Afghanistan, on Nov. 3, 2021. UN World Food Program top official Mary-Ellen McGroarty said on Thursday, Jan. 13, 2022, that Afghanistan is facing a “tsunami of hunger,” with the country on the verge of economic collapse and more than half of the population struggling to eat this winter. (Bram Janssen/AP)

BRUSSELS — Afghanistan is facing a “tsunami of hunger” because of a shortage of funds that’s needed to keep the supply of food intact as country teeters on the edge of economic run with more than half of the population struggling to eat this winter, a senior official with the United Nations World Food Program said on Thursday.

In an interview with The Associated Press, WFP leader in Afghanistan Mary-Ellen McGroarty urged the international community to put humanitarian necessity above political discussions and avoid disaster by making sure that billions in aid keep reaching the Taliban-run country.

“We don’t have enough money going into 2022,” said McGroarty during a stop in Brussels. “What we call all the humanitarian sector in Afghanistan needs 4.4 four billion dollars for the next 12 months to mount a comprehensive response. And for WFP, we need 2.6 billion to do the minimum we need to be doing in 2022.”

Afghanistan’s aid-dependent economy was already stumbling when the Taliban seized power in mid-August amid a disorderly departure of U.S. and NATO troops. The international community froze Afghanistan’s assets abroad and halted funding, unwilling to work with a Taliban government given its reputation for brutality during its previous rule 20 years ago.

Combined with the COVID-19 crisis and a drought, the shortage of money has had catastrophic consequences amid a dramatic surge of inflation, with the price of food going up by over 50 percent in the last couple of months.

McGroarty said she recently met with old farmers during a trip to the northeastern province of Badakhshan, who told her they have never been confronted to such an ordeal despite the experience of living through 19 governments.

“They have never before, despite the decades of conflict, had to stand in a line with their hands out for for humanitarian support,” she said. “This is the first time ever for them, and they told me the hunger is worse than the conflict that they have lived through over five decades.”

McGroarty urged the international community to keep sending money to Afghanistan, insisting that funding can get into the country independently from the Taliban.

The new Kabul rulers initially promised tolerance and inclusiveness regarding women and ethnic minorities. But so far, their actions including renewed restrictions for women and the appointment of an all-male government have left the international community and many donors unimpressed.

“We’ve been working for years in Afghanistan, in contested areas, and the money comes directly to the agencies,” McGroarty said. “We work with our partners, we work directly with the communities.”

McGroarty said the WFP managed to distribute food in key locations across the northeast and central highlands of the country in prevision of the winter months. But she said the winter snows have already started to block some of country’s major roads, making the need for aid even more urgent.

McGroarty said Afghans now face the choice of either starving or leaving their country.

“It’s one step away from a catastrophe,” she said.