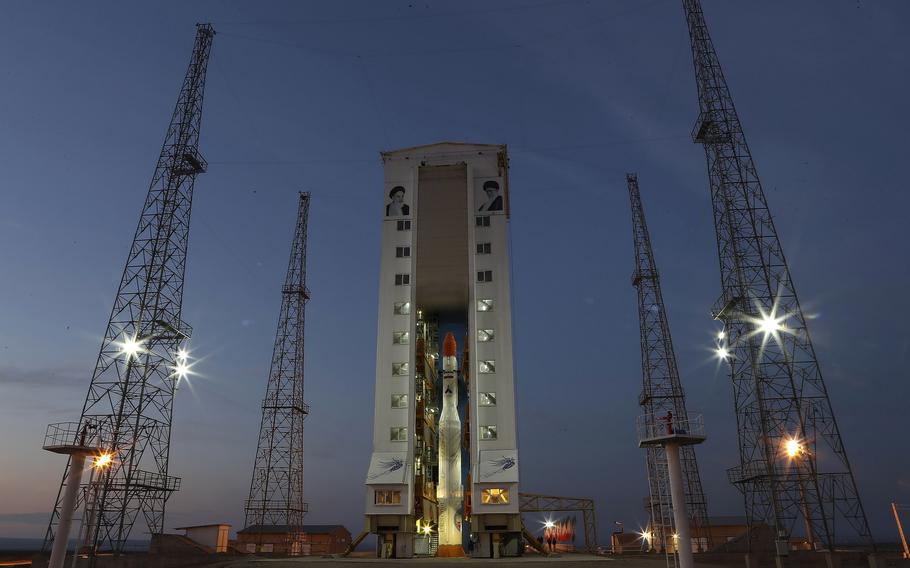 The Simorgh, or “Phoenix,” rocket prior to be launched is seen in an undisclosed location in Iran on Dec. 30, 2021, prior to its launching. Iran on Thursday, Jan. 13, 2022, announced that it launched last week a a solid-fuel satellite carrier rocket into space. (Iranian Defense Ministry)

The report quoted Gen. Amirali Hajizadeh, chief of the Guard's aerospace unit, as saying the test was successful. He said it marked the first time Iran used a solid-fuel rocket rather than a liquid-fuel one. He said Iran will produce lighter rocket engines in further space projects.

According to the general, the satellite carrier was made of a composite material instead of metal — something he claimed was "cost-efficient." Hajizadeh spoke to a group of clerics in the city of Qom, the seat of seminaries in Iran. He said Iran strongly pursues its goals in aerospace and satellite industry.

However, composites are in general more expensive to produce than their metal equivalents. Composites also make a rocket lighter so it can boost a heavier satellite or payload into orbit. State TV did not show any footage on the launch.

Satellite carriers usually use liquid fuel but solid-fuel rockets can be adapted for mobile launchers that can be driven anywhere on a major road or rail system. Pure solid-fuel rockets are mostly associated with ballistic missiles systems.

Last month, Iran said it launched a rocket with a satellite carrier bearing three devices into space, without saying whether any of the objects had entered Earth's orbit.

The State Department at the time said it remains concerned by Iran's space launches, which it asserts "pose a significant proliferation concern" in regards to Tehran's ballistic missile program.

The launches come against the backdrop of negotiations in Vienna trying to revive Tehran's tattered nuclear deal with world powers. Iran, which has long said that it does not seek nuclear weapons, insists that its satellite launches and rocket tests do not have a military component.