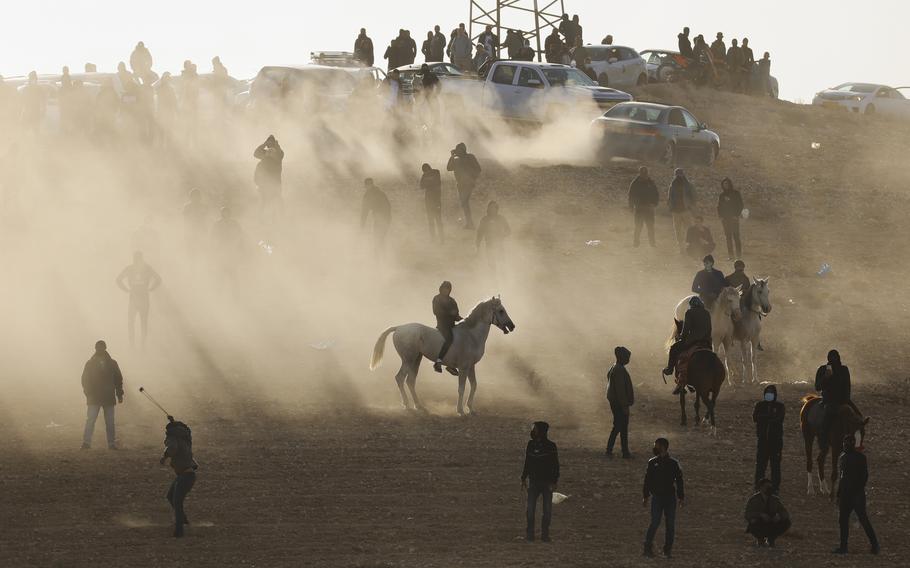 Bedouin protesters clash with Israeli forces following a protest against an afforestation project by the Jewish National Fund in the southern Israeli village of Sa’we al-Atrash in the Negev Desert, southern Israel, Thursday, Jan. 13, 2022. (Tsafrir Abayov/AP)

JERUSALEM — Israeli police on Thursday fired tear gas, rubber bullets and stun grenades to disperse hundreds of Bedouin Arabs protesting a tree-planting campaign they say is aimed at pushing them off disputed land.

It was the third consecutive day of demonstrations by Bedouin residents of southern Israel's Negev desert against a forestry project they say is aimed at seizing land near unrecognized villages.

Video footage from the scene shows hundreds of people blocking the desert highway. Police then intervene with tear gas, rubber bullets and stun grenades to clear the road. They said 13 people were arrested in what they described as a violent disturbance. Police released video clips showing people throwing rocks at cars. They said three people were hospitalized with minor injuries.

Thursday's demonstration came a day after the government announced a compromise to suspend the tree-planting campaign, which is being conducted by a quasi-governmental organization. The forestry project caused a crisis within the fragile ruling coalition, which includes a small Islamist party with significant support among Bedouins in southern Israel.

The Bedouin view the forestry project as part of a larger attempt by authorities to confiscate grazing lands and force them into planned communities, a perceived assault on their traditional lifestyle. Israel says they need to move into planned towns so it can provide public services.

The latest flare-up in the dispute, which goes back decades, risks dividing Israel's government, the first to include an Arab party.

The Bedouin are one of Israel's poorest communities and are part of Israel's Arab minority, which makes up some 20% of the country's population. They have citizenship, including the right to vote, but face discrimination. Arab citizens of Israel have close family ties to the Palestinians and often identify with their cause.