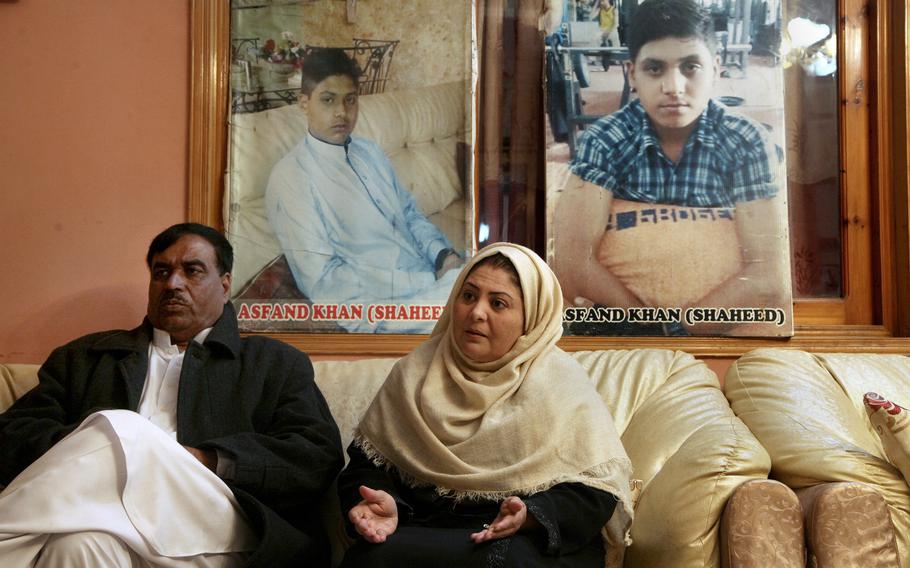 Pakistani mother Shahana with her husband Ajoon Khan sit in their home in Peshawar, Pakistan, on Dec. 29, 2021. next to photos of their son Asfand Khan, who was killed in a 2014 assault by Pakistani Taliban militants on an army public school. (Muhammad Sajjad/AP)

PESHAWAR, Pakistan — Each year on Jan. 17, Shahana bakes a cake and invites friends to her home in the Pakistani city of Peshawar. They sing happy birthday for her son, even light a candle. But it's a birthday without the birthday boy.

Her son, Asfand Khan, was 15 in December 2014 when gunmen rampaged through his military-run public school in Peshawar killing 150 people, most of them students, some as young as 5. Asfand was shot three times in the head at close range.

The attackers were Pakistani Taliban, who seven years later have once again ramped up their attacks, seemingly emboldened by the return of Afghanistan's Taliban to power in Kabul. In the last week of December, they killed eight Pakistani army personnel in a half dozen attacks and counter attacks, all in the country's northwest. Another two Pakistani soldiers were killed in an attack on Taliban outposts late Wednesday night.

The Pakistani Taliban, known by the acronym TTP, are regrouping and reorganizing, with their leadership headquartered in neighboring Afghanistan, according to a U.N. report from July. That is raising fears among Pakistanis like Shahana of a return of the horrific violence the group once inflicted.

Yet the Afghan Taliban have shown no signs of expelling TTP leaders or preventing them from carrying out attacks in Pakistan, even as Pakistan leads an effort to get a reluctant world to engage with Afghanistan's new rulers and salvage the country from economic collapse.

It is a dilemma faced by all of Afghanistan's neighbors and major powers like China, Russia and the United States as they ponder how to deal with Kabul.

Multiple militant groups found safe haven in Afghanistan during more than four decades of war, and some of them, like the TTP, are former battlefield allies of the Afghan Taliban. 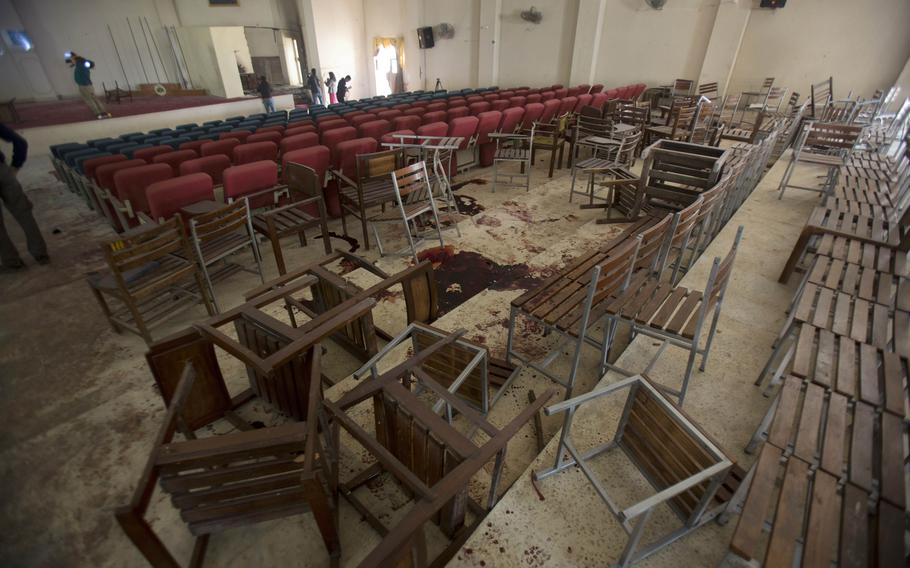 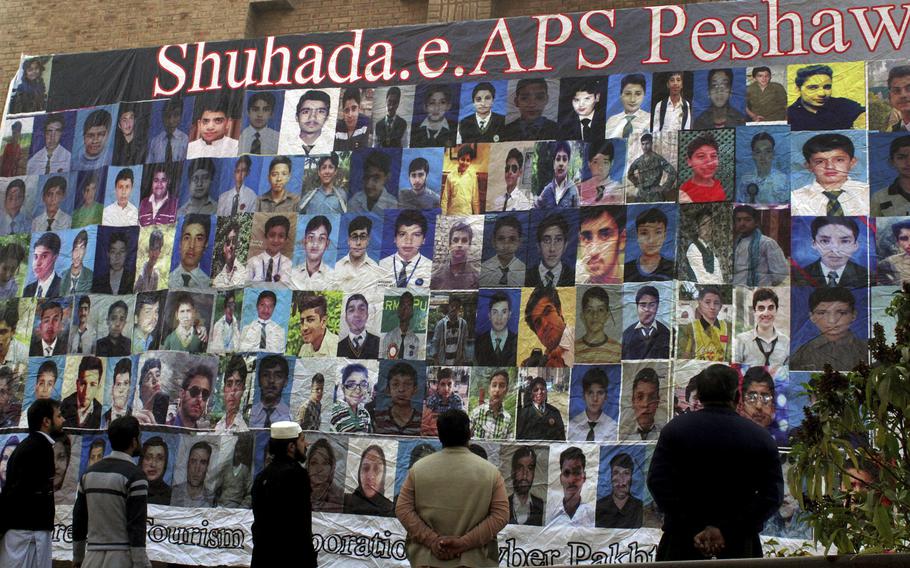 Pakistanis look at a banner in Peshawar, Pakistan, Dec. 15, 2016, displaying pictures of the victims of an attack by Taliban militants on an army public school in 2014 that killed 150 people. (Muhammad Sajjad/AP)

So far, the Taliban have appeared unwilling or unable to root them out. The sole exception is the Islamic State affiliate, which is the Taliban's enemy and has waged a campaign of violence against them and for years against Afghanistan's minority Shiite Muslims, killing hundreds in dozens of horrific attacks targeting, schools, mosques, even a maternity hospital

Washington has identified the Islamic State branch, known by the acronym IS-K, as its major militant worry emanating from Afghanistan. The Taliban's longtime ally al-Qaida is not seen as a strong threat. Though U.S. military leaders say there are signs it may be growing slightly, it is struggling near rudderless, with its current leader, Ayman al-Zawahri, alive but unwell, according to the July U.N. report.

Still, there are plenty of other militants based in Afghanistan, and they are raising concerns among Afghanistan's neighbors.

China fears insurgents from its Uighur ethnic minority who want an independent Xinjiang region. Russia and Central Asian nations worry about the Islamic Movement of Uzbekistan, which in recent years went on a recruitment drive among Afghanistan's ethnic Uzbeks.

For Pakistan, it is the TTP, which stands for Tehreek-e-Taliban Pakistan. The group perpetrated some of the worst terrorist assaults on Pakistan, including the 2014 assault on the military public school.

The TTP numbers anywhere from 4,000 to 10,000 fighters, according to the U.N. report. It has also succeeded in expanding its recruitment inside Pakistan beyond the former tribal regions along the border where it traditionally found fighters, says Amir Rana, executive director of the Pakistan Institute of Peace Studies, an independent think tank in the capital Islamabad.

Analysts say the Afghan Taliban's reluctance to clamp down on the TTP does not bode well for their readiness to crack down on the many other groups.

"The plain truth is that most of the terrorist groups operating in Afghanistan, aside from IS-K, are Taliban allies," says Michael Kugelman, deputy director of the Asia Program at the Washington-based Wilson Center. "And the Taliban aren't about to turn their guns on their friends, even with mounting pressure from regional players and the West."

The militants' presence complicates Pakistan's efforts to encourage international dealings with the Afghan Taliban in hopes of bringing some stability to an Afghanistan sliding into economic ruin.

Analysts say Pakistan's military has made a calculation that the losses inflicted by the TTP are preferable to undermining Afghanistan's Taliban rulers by pressing them on the issue. A collapse would bring a flood of refugees; Pakistan might be their first stop, but Islamabad warns that Europe and North America will be their preferred destination.

Islamabad attempted to negotiate with the TTP recently, but the effort fell apart. Rana of the Pakistan Institute of Peace Studies said Pakistan's policy of simultaneously negotiating with and attacking the TTP is "confusing" and risks emboldening like-minded insurgents in both countries.

It also worries its allies, he said.

China, which is spending billions in Pakistan, was not happy with Islamabad's attempts at talks with the TTP because of its close affiliation with Uighur separatists, said Rana. The TTP took responsibility for a July bombing in northwest Pakistan that killed Chinese engineers as well as an April bombing at a hotel where the Chinese ambassador was staying.

Pressure is mounting on Pakistan to demand the Afghan Taliban hand over the TTP leadership.

But Islamabad's relationship with the Taliban is complicated.

Pakistan's powerful military, which shepherds the country's Afghan policy, has ties to the Taliban leadership going back more than 40 years to an earlier invasion. Then, together with the U.S., they fought and defeated the invading former Soviet Union.

After the 2001 U.S.-led invasion of Afghanistan, Pakistan was accused by Washington and its Afghan allies of aiding the Taliban. Pakistan denied the accusations, even as Taliban leaders and their families lived in Pakistan while waging their insurgency against Kabul. 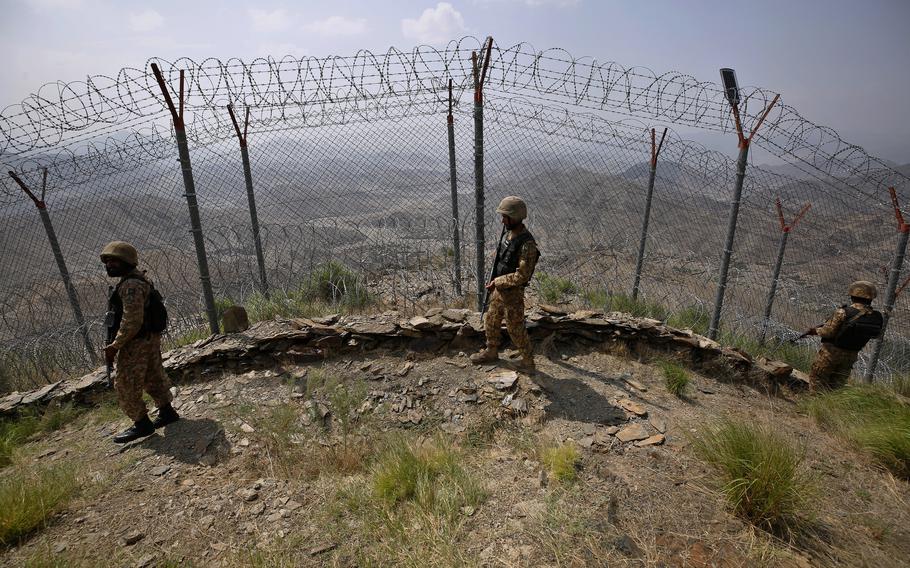 But the Taliban also have interests divergent from Pakistan's, particularly the issue of the two countries' 1,600-mile border. Afghanistan has never recognized the border, known as the Durand Line, which was drawn by British colonial administrators in the 19th Century.

The Taliban's Defense Ministry issued a statement saying Pakistan had no right to erect a border fence. On Wednesday Pakistan's military spokesman Gen. Babar Iftikar said the fence was 94% done and would be completed.

"The fence on the Pak-Afghan border is needed to regulate security, border crossing and trade," he said. "The purpose of this is not to divide the people, but to protect them."

Even if Pakistan were to ask the Taliban to hand over TTP leaders, it shouldn't expect any results, says Bill Roggio, editor of the Long War Journal which tracks global militancy.