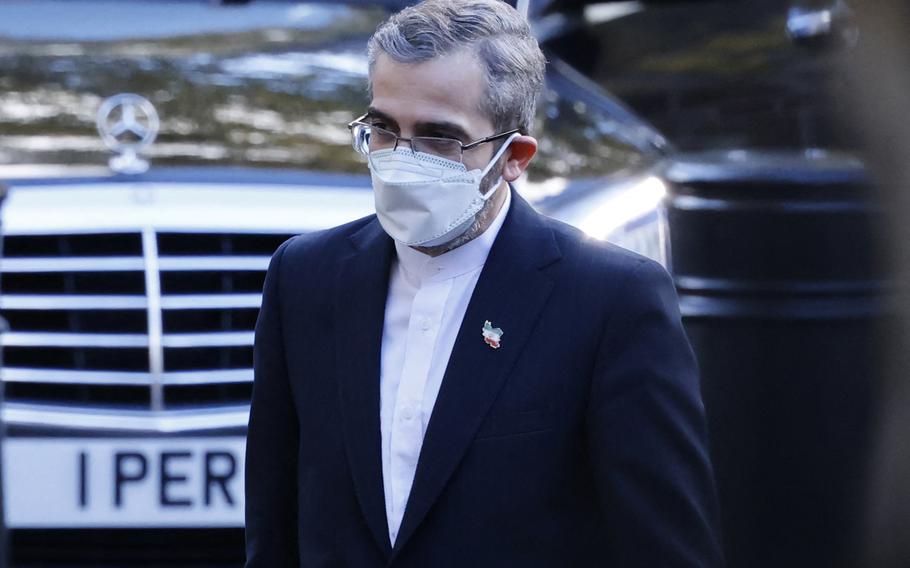 Iranian diplomat and political deputy at the Ministry of Foreign Affairs of Iran Ali Bagheri Kani arrives outside the Foreign, Commonwealth and Development Office in London on Nov. 11, 2021. (Tolga Akmen, AFP, Getty Images/TNS)

(Tribune News Service) — Iran’s chief nuclear negotiator said world powers must secure full, guaranteed and verifiable sanctions removal for Tehran when they resume talks on Monday aimed at reviving a landmark 2015 deal and ending a standoff with the U.S.

“The West needs to pay a price for having failed to uphold its part of the bargain,” Ali Bagheri Kani, Iran’s deputy foreign minister and the official leading the country’s nuclear negotiating team in Vienna, wrote in an op-ed in the Financial Times published Sunday, referring to former U.S. President Donald Trump’s decision to abandon the nuclear accord in 2018.

“We are ready for a fair and careful discussion, based on the principles of ‘guarantee’ and ‘verification.’ This must prioritize compensation for the violation of the deal, which includes the removal of all post-JCPOA sanctions,” Bagheri Kani added, referring to the Joint Comprehensive Plan of Action, the official name of the nuclear deal.

The piece appears to reaffirm his team’s position before indirect negotiations with the U.S. — mediated by the European Union, China and Russia — start after months of delays.

The Vienna talks will be closely watched by traders looking for signs of when the Islamic Republic will ramp up oil exports and start supplying markets again.

“We have two goals: the first is to gain a full, guaranteed and verifiable removal of the sanctions,” the second to facilitate benefit from “peaceful nuclear knowledge,” he wrote, adding that Iran was bracing for Western countries to demand more concessions.