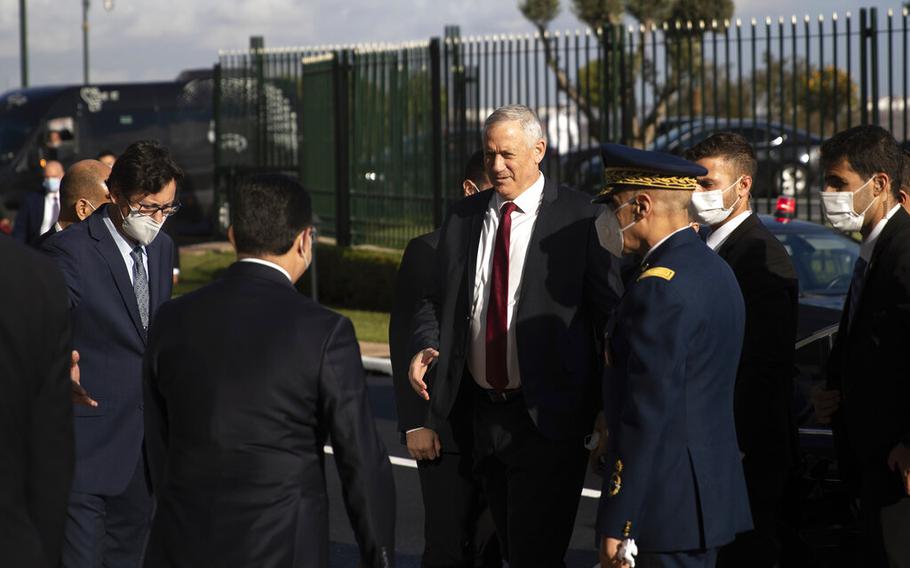 RABAT, Morocco — Israel’s defense minister said Thursday he hopes a better nuclear deal will come out of upcoming talks between world powers and Iran, but that Israel is hedging its bets and building up its military capabilities.

Benny Gantz spoke to reporters at the close of a two-day visit to the Moroccan capital of Rabat, where he met with top Moroccan intelligence, defense and diplomatic officials. Among the issues discussed was Iran.

“Our obligation concerning Iran is to influence our partners and maintain an ongoing conversation,” Gantz said. “Our second obligation is to build up military power, which is something important in and of itself.”

Nuclear talks between Iran and world powers are set to kick off next week in Vienna.

Iran has steamed ahead with its enrichment of uranium since the United States withdrew from a landmark nuclear agreement with world powers in 2018. Israel was deeply opposed to that agreement, and Israeli officials now say Tehran is closer than ever to developing nuclear arms.

Iran says its nuclear program is for purely peaceful purposes and has blamed the breakdown of the agreement on the Trump administration’s decision to withdraw from it and restore crippling sanctions. The Biden administration has said it hopes to negotiate a return to the deal.

Israel is widely believed to be the only nuclear-armed country in the Middle East, though it maintains a policy of ambiguity about its own program.

Gantz said that Israel must work in concert with the U.S. and avoid making the issue of Iran’s nuclear program a partisan one.

“A good agreement is one that will plug the holes in the previous agreement in the fields of nuclear development, missile launching systems, breakout time and what Iran is doing in the region,” Gantz said.

Gantz’s visit was the first official visit by an Israeli defense official to one of its new Arab allies. Israel and Morocco normalized relations last year as part of the so-called Abraham Accords and this week signed a defense agreement.

The defense minister visited Rabat’s sole functioning synagogue, Talmud Torah, and was welcomed by leaders of the small Jewish community. The cantor recited prayers for the welfare of the king and for Israel and its armed forces. On display was a framed picture of King Mohamed VI, the Moroccan flag and the Israeli flag — an addition to the synagogue since the signing of the accords last year.

“Even when it’s difficult, we need to strive for peace,” Gantz said to a group that included Moroccan and Israeli military officers. “We must always been the strongest in the region.”