Families of Beirut blast victims rally for probe to resume 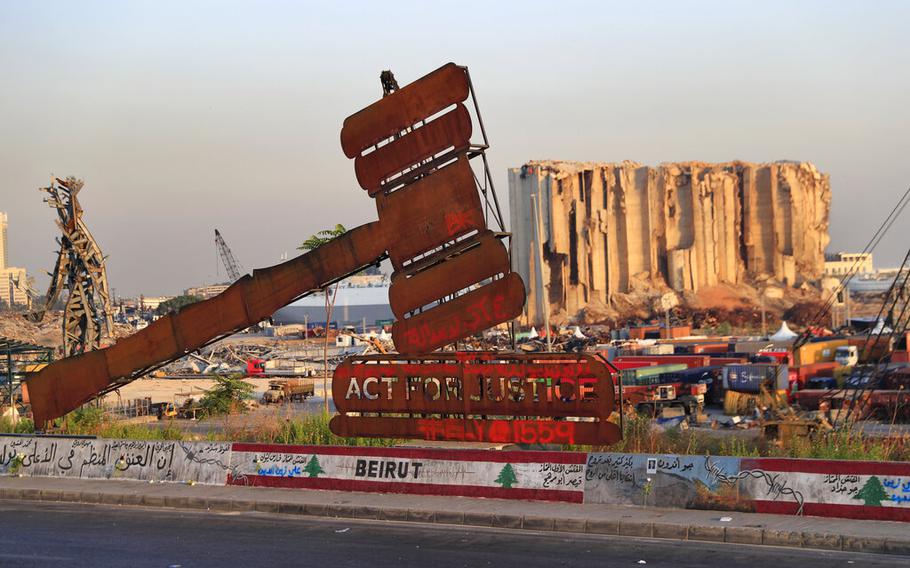 A monument that represents justice stands in front of towering grain silos that were gutted in the massive August 2020 explosion at the port that killed more than 200 people and wounded over 6,000, in Beirut, Lebanon, Aug. 4, 2021. Families of victims of the Beirut port blast gathered Thursday outside Lebanon’s courts of justice to protest continued obstruction of the national probe into the devastating explosion 15 months earlier. Their message was: “We are sick of waiting.” (Hussein Malla/AP)

BEIRUT — Families of the victims of last year’s explosion in Beirut’s port rallied Thursday outside Lebanon’s top court against what they say are intentional obstructions to the probe of the devastating blast. They said their message to authorities was: “We are sick of waiting.”

Lebanon’s investigation into the August 2020 explosion led by Judge Tarek Bitar was suspended for the third time earlier this month because of a deluge of legal challenges filed by defendants.

The latest suspension, now entering its fourth week, is the longest since Bitar took over the case in February, after his predecessor was removed through a court order. Other legal challenges have resulted in only days of suspension.

The families said in a statement that the repeated obstructions of the probe was “surprising and shameful.”

“The defendants succeeded in drowning the case in a web of politics and judicial complexities,” George Bezdjian, a spokesperson for the families, read from the statement. Bezdjian’s daughter Jessica, a nurse, was killed in the explosion.

Bitar’s investigation has faced at least 15 lawsuits, each questioning the course of the probe, his impartiality and authority. Most lawsuits were shot down by lower courts.

But earlier this month, a senior judge on the government-appointed Higher Judicial Council accepted a defendant’ request to recuse Bitar, automatically halting the probe until a final decision. Though that move was dismissed Wednesday by yet another top judge, legal experts say Bitar will likely wait for a court decision that states clearly he can return to work.

It was not clear when the decision may happen.

At the heart of the legal quagmire is criticism from senior Lebanese officials who were in charge when the nearly 3,000 tons of ammonium nitrate, a highly explosive material used in fertilizers, was stored in the Port of Beirut and kept there for years. Bitar has summoned a dozen senior officials, charging some with criminal negligence and homicide with probable intent.

On Aug. 4, 2020, the nitrate ignited after a massive fire at the port. The explosion killed over 216 people and injured over 6,000. Parts of Beirut were badly damaged.

Suspected officials first claimed parliamentary or professional immunity protected them against questioning by the judiciary. Then the lawsuits began. Last month, the head of Lebanon’s powerful militant Hezbollah group called for Bitar’s removal.

The probe has also paralyzed the government, after ministers allied with Hezbollah demanded the Cabinet respond to calls for Bitar’s removal.

The families of the blast victims called on the judiciary to allow the probe to resume. To those obstructing the probe, they said: “History will have no mercy on you.”