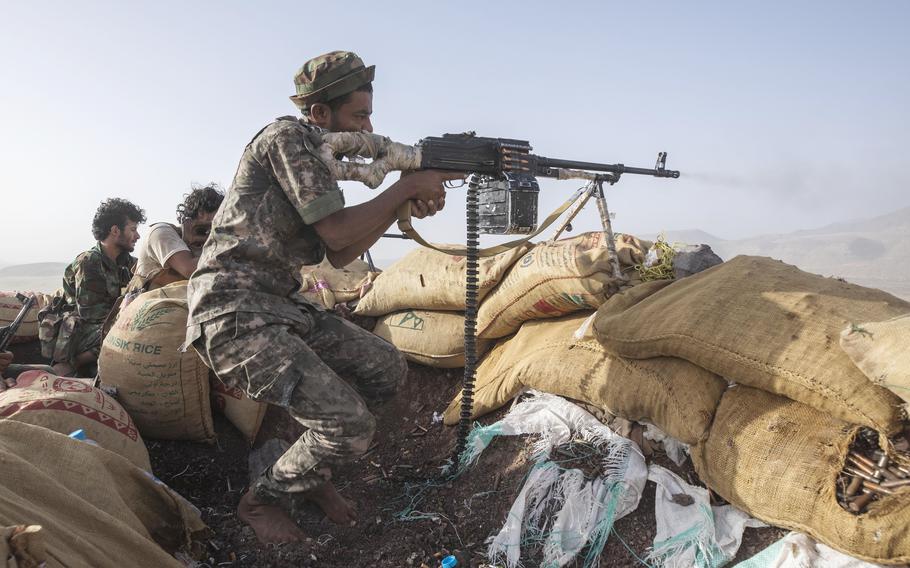 A Yemeni fighter backed by the Saudi-led coalition fires his weapon during clashes with Houthi rebels on the Kassara frontline near Marib, Yemen on June 20, 2021. (Nariman El-Mofty/AP)

DUBAI, United Arab Emirates — The foreign minister of Yemen's government in exile warned Sunday that a rebel takeover of the crucial, energy-rich city of Marib would be a disaster on the scale of the collapse of its ancient dam that decimated an entire kingdom.

Ahmad Awad Bin Mubarak's comments mark some of the most dire made regarding the offensive by the Iran-backed Houthi rebels, who have held Yemen's capital since September 2014. Though the intervention of Saudi-led coalition halted their march south in 2015, the war has slogged on for years and created the world's worst humanitarian crisis.

Meanwhile, forces backing Yemen's exiled government and Saudi Arabia have fallen back recently from the key port city of Hodeida, allowing the Houthis to regain ground there as well.

"Without changing the facts on the ground, the Houthis would not come at all to the table" for possible peace talks, Mubarak warned.

The battle for Marib likely will determine the outline of any political settlement in Yemen's second civil war since the 1990s. If seized by the Houthis, the rebels can press that advantage in negotiations and even continue further south. If Marib is held by Yemen's internationally recognized government, it will save perhaps its only stronghold as secessionists challenge its authority elsewhere.

Taking Marib, or otherwise cutting it off, would represent a major prize for the Houthis. It is home to oil and gas fields that international firms including Exxon Mobil Corp. and Total SA have interests. Marib's natural gas bottling plant produces cooking gas for the nation of 29 million people. Its power plant once provided 40% of Yemen's electricity.

Speaking at the Manama Dialogue in Bahrain, Mubarak referenced Marib's ancient dam. In the Quran, the dam collapses and causes massive flooding that decimated its ancient kingdom.

"We will undoubtedly say that if the Houthis control Marib, it will be as bad as when its historically famous dam was destroyed," the foreign minister told the conference organized by the International Institute for Strategic Studies. "Today, Marib is the impenetrable wall for Yemen."

Hundreds of fighters have been killed recently in fighting, which has seen the Houthis seize districts from Saudi-backed forces.