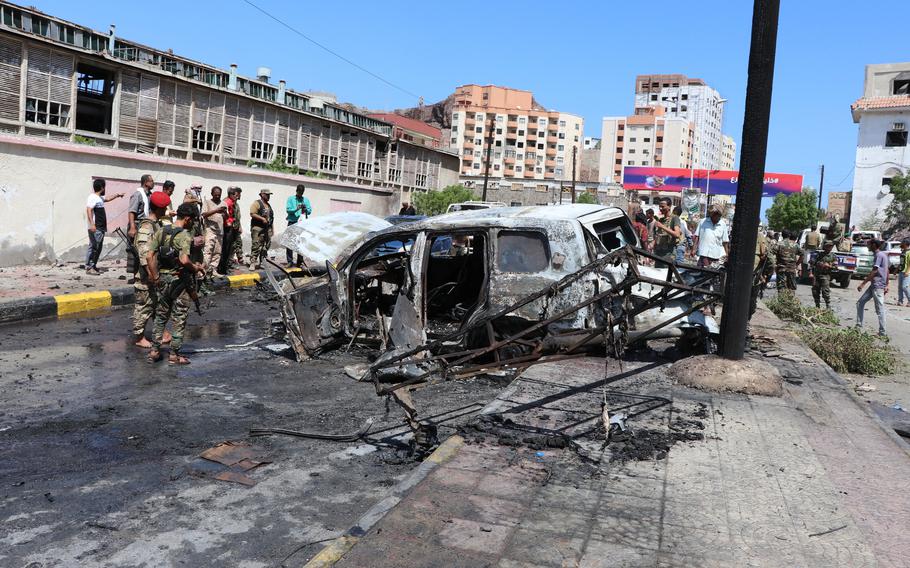 Security personnel stand amid the wreckage of a damaged vehicle at the site of a deadly car bomb attack that targeted two senior government officials, who survived, security officials said, in the port city of Aden, Yemen, Sunday, Oct. 10, 2021. Aden has been the seat of the internationally recognized government of President Abed Rabbo Mansour Hadi since the Iranian-backed Houthi rebels took over the capital, Sanaa, triggering Yemen’s civil war. (Wael Qubady/AP)

The grim remarks by Assistant Secretary-General Ramesh Rajasingham came during a briefing to the U.N. Security Council. More than 20 million Yemenis — two-thirds of the population — need humanitarian assistance, but aid agencies, he said, "are, once again, starting to run out of money."

Aid agencies are now helping nearly 13 million people across the country, about 3 million more than just a few months ago, Rajasingham added. "Our best assessment is that this expansion has considerably pushed back the immediate risk of large-scale famine."

But he warned that aid agencies don't have enough money to keep going at this scale and "in the coming weeks and months, up to 4 million people could see their food aid reduced" and "by the end of the year, that number could rise to 5 million people."

"We are calling on everyone to do everything possible to sustain the momentum we've built over the last several months and keep famine at bay," he said.

Yemen has been convulsed by civil war since 2014 when Iran-backed Houthi rebels took control of the capital of Sanaa and much of the northern part of the country, forcing the internationally recognized government to flee to the south, then to Saudi Arabia.

A Saudi-led coalition entered the war in March 2015, backed by the United States, to try restore President Abed Rabbo Mansour Hadi to power, and threw its support behind his government. Despite a relentless air campaign and ground fighting, the war has deteriorated largely into a stalemate and spawned the world's worst humanitarian crisis. The U.S. has since suspended its direct involvement in the conflict.

In early 2020, the Houthis launched an offensive in the mostly government-held Marib province which has cost the lives of thousands of young people and left thousands of displaced civilians living in constant fear of violence and having to move again.

On Thursday, tribal leaders and Yemeni officials said that fighting over Marib in the last 24 hours killed at least 140 fighters on both sides. The clashes were taking place in the districts of Abdiya and al-Jubah, they said.

At the briefing to the Security Council, Rajasingham said the Houthis "intensified their brutal offensive in Marib, taking more territory there and in neighboring parts of the southern province of Shabwa.

He also pointed to clashes between rival armed groups earlier this month in the southern city of Aden — where Hadi's government set up headquarters after the Houthis pushed them out of Sanaa and the north — and continuing fighting, shelling and air strikes in northwest Saada and western Hajjah and Hodeida provinces "and along nearly 50 other front lines."

The new U.N. special envoy for Yemen, Hans Grundberg, who took up the post last month, told the council that he has held meetings with government and Houthi officials, as well as key regional and international officials focused on how to move toward a political solution to restore peace in Yemen.

"The gap in trust between warring parties is wide and growing," he said in a virtual briefing.

Grundberg said he made clear that while progress should be made on urgent humanitarian and economic issues, urgent political talks without preconditions are essential to negotiate a settlement of the conflict.

"Let us not fool ourselves, this will be a laborious and complicated task that will take time but it must take place," Grundberg said. "The past weeks have illustrated the tension between the pace of the war and the economic collapse on one hand, and the time needed to devise and consult on a feasible way forward, on the other."

Rajasingham reiterated that Yemen's economic collapse "is driving most needs in the country — including the risk of famine."

Yemen imports almost everything, he said, and the Yemeni rial is trading around 1,270 rials to the dollar in Aden, nearly six times higher than before the war, and fewer goods are reaching the country's ports. Commercial food imports to the key ports of Hodeida and Saleef were 8% below last year's average in September, and "fuel imports were an alarming 64% lower," he said.

He urged immediate steps to stem the country's economic collapse including injections of foreign exchange through the Central Bank which would quickly bring down prices, as they did in the past, as well as fully opening all ports, lifting import restrictions at Hodeida and Saleef, and paying civil servant salaries. Associated Press writer Ahmed al-Haj in Sanaa, Yemen, contributed to this report.