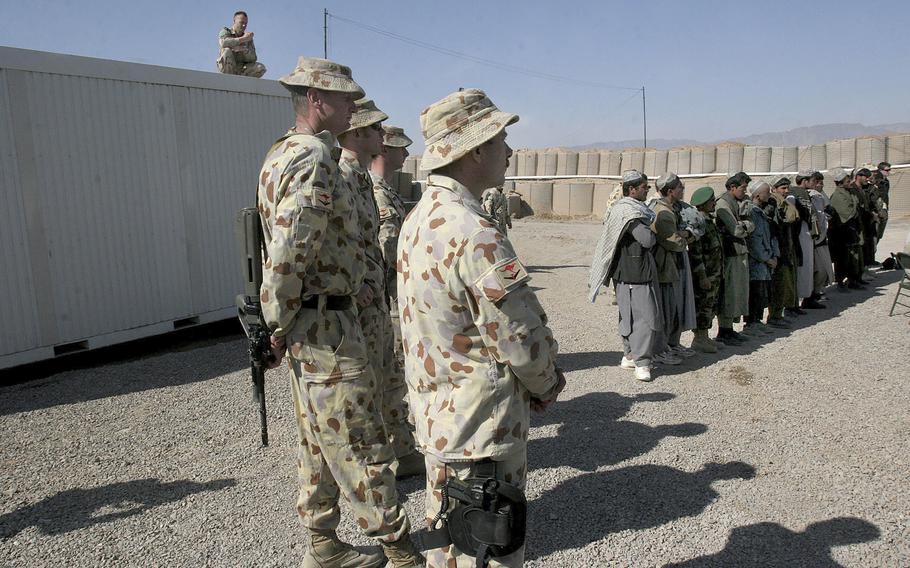 In this Feb. 17, 2007 file, Australian soldiers, part of the International Security Assistance Force (ISAF), stand near local Afghans at a ceremony to open a Trade Training School, funded by Australian forces at the Tarin Kowt military base in Uruzgan province, south of Kabul, Afghanistan. (Musadeq Sadeq/AP)

CANBERRA, Australia — An Afghan army deserter who murdered three Australian soldiers had been released from custody in Qatar and his whereabouts were not known, officials said on Monday.

The soldier known as Hekmatullah fled after shooting dead the Australian soldiers and wounding two others on a base in 2012 and was sentenced to death in 2013.

"The government's position has always been that Hekmatullah should serve a just and proportionate sentence, appropriate to his crimes, and not be granted early release or pardon," an Australian government statement said.

Defense Force Chief Gen. Angus Campbell told a Senate committee the families of the soldiers were were notified of Hetmarullah's release.

Hugh Jeffrey, a Defense Department international policy expert, told the committee Australia discovered Hekmatullah had been released "from Qatar through highly sensitive intelligence." Jeffrey did not know the circumstances of the release.

The Qatari government did not immediately respond to a request for comment.

Hekmatullah had been transferred from Afghanistan to Qatar in September last year in a deal brokered by the United States ahead of peace talks between Afghanistan and the Taliban.

The energy-rich Arabian nation has been the site of negotiations between the U.S. and the Taliban and has hosted an office for the group that now controls Afghanistan.