A bird stars in rare feel-good tale about Afghan evacuations 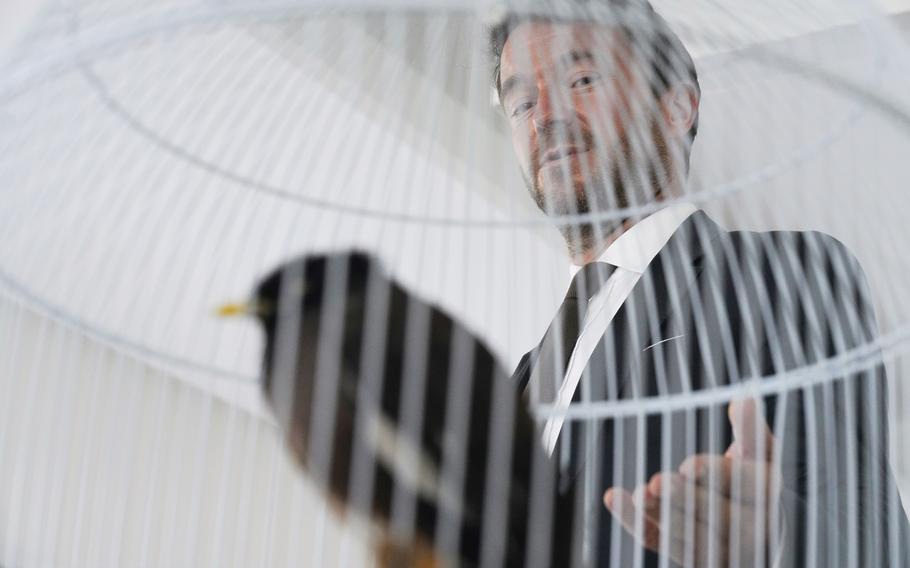 ABU DHABI, United Arab Emirates — The mynah bird squawks from a new cage in the French ambassador's sunlit living room in Abu Dhabi, a far cry from its life as the pet of a young Afghan woman who has since found refuge in France.

Talkative, yellow-beaked "Juji" had a brief star turn on social media, its story of survival amid the frenzied evacuations from Taliban-run Afghanistan striking a nerve with a global audience.

While searing scenes from the American-led airlift from Kabul after 20 years of war — such as those of Afghans falling to their deaths after trying to cling to the wheels of a military transport jet — gripped the world, France also was intensely involved in evacuating those who had risked their lives to cooperate with its government over the years.

French Ambassador Xavier Chatel was scrambling to support the efforts at Al-Dhafra air base in the United Arab Emirates. Thousands of Afghan evacuees flooded the base near the UAE capital, along with military bases across the region, to be screened by American, French and other authorities over 12 sweltering days in August.

"There were many exhilarating stories because there were artists, there were musicians, there were people who were so relieved that they could be evacuated," Chatel told The Associated Press Sunday from his residence overlooking the turquoise waters of the Persian Gulf. "But at the same time there was also an outpouring of distress."

Some 2,600 Afghan interpreters, artists, journalists, activists and military contractors squeezed onto flights out of Kabul to Abu Dhabi on their way to Paris with barely enough time to consider all they'd left behind. French authorities had started evacuations around a year ago, with 2,400 people airlifted from Kabul in the months before the fall, Chatel said.

In the midst of the chaos at Al-Dhafra, Chatel received a security alert. Officers, on the lookout for al-Qaida and Islamic State extremist threats, had discovered illegal cargo on board.

A woman no older than 20 appeared, clutching a mystery cardboard box. Packed inside was her beloved pet with clipped wings — the famously chatty mynah, common in its range across Southeast Asia.

But because of sanitary concerns, there was no way she could take the small bird with her to Paris.

Chatel's story of what happened next took hold on Twitter last week and turned Juji into a minor sensation, providing an uplifting counterpoint to the economic and humanitarian crises afflicting Afghanistan amid the Taliban takeover.

The young woman found the ambassador on Twitter soon after landing in France. Top of her mind upon starting a new life as a refugee was her pet stranded on the Arabian Peninsula.

Chatel replied with videos of Juji snacking on fruit, flitting around its white cage and even learning French from his marble-floored living room. After chirping in Pashto for its first few days in Abu Dhabi, Juji had managed to utter something akin to "Bonjour."

"(The woman) told me something which still remains with me," Chatel said. "The fact that the bird was still alive and that he was well looked after gave her faith and and hope to start again."

Exactly why the story was so avidly embraced on social media remains a mystery, Chatel said. But there were no good news days out of Afghanistan during the anguished withdrawal of U.S. and NATO forces.

A suicide bomber blew himself up at Kabul airport in late August, killing scores of Afghans and 13 U.S. service members, and those who managed to escape their homes for new lives abroad were grappling with feelings of bewilderment and guilt. With the country's economy in free fall, ordinary people have struggled to survive.

At Al-Dhafra air base in August, you could see the fear in people's faces, Chatel said. Children cried at the sound of popping balloons. One woman said she had "forgotten" her parents in a traumatic haze at Kabul airport. Parents arrived with stories of children they'd abandoned.

Until Chatel can devise a way to reunite Juji with its former owner, he said the black-winged bird remains a reminder to France of those frantic days — the courage of those embarking on new lives and the emotional toll of so many left behind.