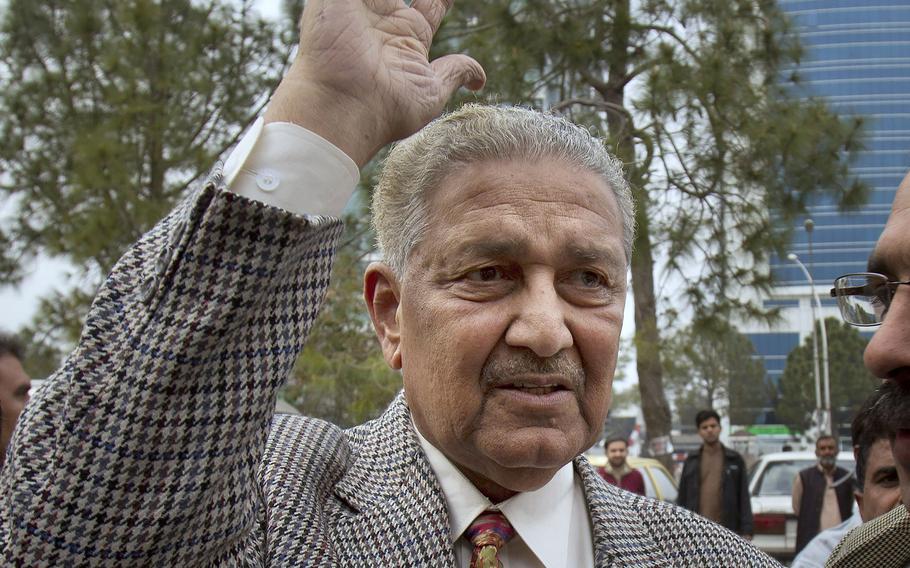 ISLAMABAD — Abdul Qadeer Khan, a controversial figure known as the father of Pakistan's nuclear bomb, died Sunday after a lengthy illness, the country's interior minister said. He was 85.

Khan launched Pakistan on the path to becoming a nuclear weapons power in the early 1970s. Interior Minister Sheikh Rasheed Ahmad said he died in a hospital Islamabad. He didn't elaborate.

Khan was mired in controversy that began even before he returned to Pakistan from the Netherlands in the 1970s, where he had worked at a nuclear research facility.

He was later accused of stealing the centrifuge uranium enrichment technology from the Netherlands facility that he would later use to develop Pakistan's first nuclear weapon, according to research done by the Carnegie Endowment for International Peace.

Khan, who held a doctorate in metallurgical engineering from the Catholic University of Leuven in Belgium, offered to launch Pakistan's nuclear weapons program in 1974 after neighbor India conducted its first "peaceful nuclear explosion."

He reached out to then-Prime Minister Zulfikar Ali Bhutto offering technology for Pakistan's own nuclear weapons program. Still smarting from the 1971 loss of East Pakistan, which became Bangladesh, as well as the capture of 90,000 Pakistani soldiers by India, Bhutto embraced the offer. He famously said: "We (Pakistanis) will eat grass, even go hungry, but we will have our own (nuclear bomb)."

Pakistan's nuclear program and Khan's involvement have long been the subject of allegations and criticism.

Khan was accused by the U.S. of trading nuclear secrets to neighbor Iran and to North Korea in the 1990s after Washington sanctioned Pakistan for its nuclear weapons program. For 10 years during the Soviet occupation of neighboring Afghanistan, successive U.S. presidents certified Pakistan was not developing nuclear weapons. The certification was necessary under American law to allow U.S. aid to anti-communist rebels through Pakistan.

But in 1990, just months after the 1989 withdrawal of Soviet troops from Afghanistan, Washington slapped Pakistan with crippling sanctions ending all aid to the country, including military and humanitarian.

Pakistan was accused of selling nuclear weapons technology to North Korea in exchange for its No-Dong missiles capable of carrying nuclear warheads. A 2003 Congressional Research Report said that while it was difficult to pinpoint the genesis of Pakistan's nuclear cooperation with North Korea, it likely began in the mid-1990s

Khan was rejected by Pakistan's dictator President Gen. Pervez Musharraf after 2001, when details of Khan's alleged sales of nuclear secrets came under renewed scrutiny. Khan bitterly denounced Musharraf and his attempt to distance the state from his activities, always denying he engaged in any secret selling or clandestine nuclear weapons technology exchanges.

In recent years, Khan mostly lived out of the public eye and tributes from fellow scientists and Pakistani politicians began soon after his death.

Prime Minister Imran Khan called him a "national icon," whose nuclear weapons program "provided us security against an aggressive much larger nuclear neighbor. For the people of Pakistan he was a national icon."

"It was unthinkable for the west that Pakistan would make any breakthrough but finally they had to acknowledge Dr. Khan's achievement of making the country's nuclear weapons," he said.

Khan passed at the KRL Hospital in the capital Islamabad after a protracted illness. He was to be buried with state honors Sunday afternoon at a mosque in the capital.