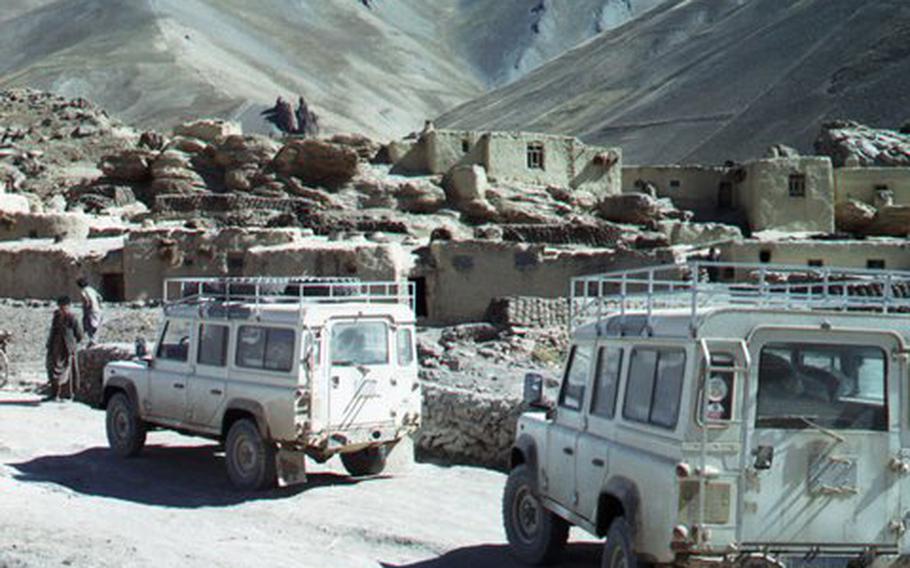 The U.N. Development Program, in a novel temporary fix, plans this week to take over management from the World Bank of the system that has supplied hundreds of millions of aid dollars for essential health services throughout Afghanistan in recent years, including paying the salaries of at least 25,000 doctors, nurses and other workers in thousands of hospitals and clinics. (David L. Evans/AP)

As the abrupt cutoff of foreign funding since the Taliban takeover threatens economic collapse in Afghanistan, risking the lives of many of its citizens along with their livelihoods, a United Nations agency has come up with a way to keep at least some of the money flowing.

The U.N. Development Program, in a novel temporary fix, plans this week to take over management from the World Bank of the system that has supplied hundreds of millions of aid dollars for essential health services throughout Afghanistan in recent years, including paying the salaries of at least 25,000 doctors, nurses and other workers in thousands of hospitals and clinics.

The payments, and other operational support for health services, were halted when the World Bank, along with the International Monetary Fund, the United States, Europe and virtually every other donor and lender stopped paying the bills on Aug. 15, the day the Taliban entered Kabul.

An initial $15 million to finance the program during October has been donated by the Global Fund, a separate, worldwide health partnership of public and private donors whose primary mission is fighting endemic diseases in sub-Saharan Africa.

The stopgap measure comes as the wealthiest and most powerful nations grapple with how to help desperate people in one of the world’s most destitute places, even as they refuse to recognize the government of the militant group that now runs it.

Without that recognition, neither the World Bank nor the International Monetary Fund - where the United States and its allies hold the majority of voting shares - can operate in Afghanistan. Although the IMF, pre-Taliban, allocated $440 million in interest-free drawing rights to Afghanistan, that money is now off-limits.

Virtually all aid that for years has supported up to 80% of all Afghan government expenditures has stopped except for a trickle of the most basic humanitarian supplies of food and medicine distributed through resident nongovernmental organizations that the Taliban has allowed some operational independence. The United States has frozen nearly $10 billion in Afghan government assets held by the Federal Reserve.

Having tried and failed over two decades to keep the militants out of power with military might, the international community - led by the United States, the largest donor to Afghanistan - is now trying to bend them to its will by using its most powerful remaining weapon: money.

But the question it faces is how to balance holding the Taliban to its promises - establishment of an inclusive government, preservation of the rights of women and minorities, and prevention of Afghanistan’s use as a launchpad for global terrorism - with the immediate needs of 40 million Afghans.

Both China and Russia, which have continued to operate their embassies in Kabul while not officially recognizing the Taliban government, have used the opportunity to liberally criticize U.S. policy over the past 20 years.

What to do about Afghanistan is a subject of near-constant discussion within the Biden administration, in bilateral talks between governments and in international forums. It will be a hot topic at the annual World Bank and IMF meetings in Washington next week, and at the Group of 20 summit in Rome at the end of October. Already, some U.S. allies who, like the administration, set up offices in the Qatari capital of Doha after shutting down their Afghanistan embassies, are starting to talk about reestablishing a presence in Kabul short of diplomatic relations.

“You’re going to have very soon, before the end of the year, not just a complete meltdown. The fiscal cliff is right with us. ... We’re standing at the edge of it if not hanging by our fingernails,” Wignaraja said in an interview.

Donor governments, she said, are going to have to “wrap their heads around the politics of this, of an administration they don’t support, that is globally not recognized, including by the U.N. Security Council and member states.”

“How do you square that with the fact that it’s very hard to bring back a whole nation of people who are pushed to starvation, who have no way of earning a living?” Wignaraja said.

European Union foreign policy chief Josep Borrell agreed that disaster looms. “Certainly it’s a dilemma,” he said Sunday during a visit to Saudi Arabia. “Because if you want to contribute to avoid the collapse of an economy, in a certain way, you can consider supporting the government ... depending on their behavior. And their behavior until now is not very encouraging.”

What the Taliban has said is an “interim” government, appointed last month, includes no women and few non-Taliban. Many professionals, government bureaucrats and technical experts have either fled the country or are in hiding for fear of Taliban reprisals. Amid reports of harsh treatment of civilians reminiscent of the militants’ brutal rule in the late 1990s, girls have so far been banned from education beyond the sixth grade.

The problem of the immediate future has also become a domestic political football in the United States, following the loss of the war and the chaotic U.S. exit in August.

Echoing the administration, Senate Foreign Relations Committee Chairman Robert Menendez, D-N.J., said Monday that “no U.S. foreign aid will go to a Taliban-controlled Afghan government.” But, he said after fighting off a legislative challenge to any assistance at all to Afghanistan, “this does not mean that we remain any less committed to supporting the Afghan people.”

In addition to receiving military funding and humanitarian and other assistance through international organizations, Afghanistan for years has been the largest recipient of bilateral aid from the U.S. Agency for International Development, with $19.5 billion spent since 2002, and nearly $500 million committed for fiscal year 2020.

But with ongoing uncertainty about the Taliban’s direction, all U.S. government personnel now evacuated from the country and no direct funding allowed, programs in agriculture, governance, education and other sectors have been suspended. E.U. development assistance is similarly being held in abeyance.

So far, the overall appeal is only 35% funded, Guterres spokesman Stephane Dujarric told reporters Tuesday. “We would appreciate more cash,” he said.

But the cash for emergency supplies is only a Band-Aid, UNDP’s Wignaraja said. Only about 17% of about 2,200 health facilities funded under the World Bank program - many just one-room clinics - “are currently fully functional” and able to use whatever humanitarian supplies may arrive, she said. No personnel have been paid, and those still working are doing so on a voluntary basis,Wignaraja said.

“There is a risk that the Afghan people will have virtually no access to primary health services,” she said.

Three years ago, in a consolidation of a complex web of projects in Afghanistan, the World Bank stepped in to administer a $600 million, three-year program, under the Afghanistan Reconstruction Trust Fund, to deliver basic health and hospital services to all of Afghanistan outside Kabul and its environs. The aid, extended in the spring of 2021, for at least another year, was distributed under contract by 13 separate nongovernmental organizations - all but two of them Afghan.

When the Bank’s authorization to continue operations in Afghanistan was frozen in August, it asked the Global Fund - whose worldwide donors pay for treatment and control of malaria, tuberculosis, HIV and now covid-19 - to supply the money to allow health services to continue. The Fund then asked UNDP, already the administrating authority for its disease program in Afghanistan, to assume responsibility for disbursing the money.

The Taliban, Wignaraja said, has agreed that it will have no access to the funds, which are to be deposited in a UNDP account at one of the few operating Afghan commercial banks - a dollar transfer that the special licenses newly issued by the administration will now allow. UNDP will then transfer it in local currency to the accounts of the NGOs, which will distribute it directly in cash to the recipients.

“They know very well they can’t administrate, in the sense that we can’t send money through them,” she said of the militants. “They’re very well aware of the plan.”

Wignaraja stressed that the UNDP, with Global Fund money, is acting only as a “temporary lifeline,” to test if the system will work. After October, if necessary, it is hoped that other agencies such as the World Health Organization, the U.N. Children’s Fund, and the International Committee of the Red Cross may step in for the rest of the year, with money from the U.N.’s central emergency response account.

“Our duty is to step up cooperation and increase funding to ensure the most vulnerable populations - particularly women and girls - continue to have safe access to essential health services,” Peter Sands, executive director of the Global Fund, said in a statement prepared for announcement of the plan Wednesday.

By the beginning of 2022, Wignaraja said, the hope is that the World Bank will have regained member approval to return to Afghanistan.

In the meantime, she said, such measures are only “micro-level solutions” to the “macro-level implosions” in a country where few now have a way of earning a living, and the gains of the past two decades - including more than 60,000 microbusinesses operated by women - are in danger of disappearing altogether.

“Some of these tough decisions” for both sides of the divide over Afghanistan, Wignaraja said, “will have to be made sooner rather than later.”