Does Blinken's claim that Biden 'did not inherit a plan' for Afghan withdrawal hold up? 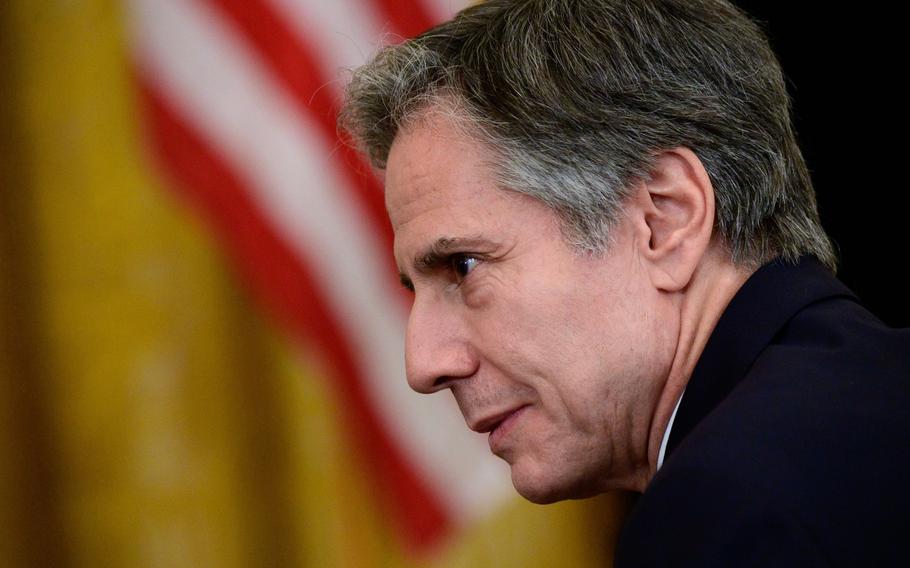 U.S. Secretary of State Antony Blinken arrives for a briefing in the East Room of the White House in Washington on May 21, 2021. (Erin Scott/Bloomberg)

"We inherited a deadline. We did not inherit a plan."

Blinken, appearing on Capitol Hill to defend the administration's chaotic withdrawal from Afghanistan, made this comment in response to questions by Rep. Brad Sherman, D-Calif.: "Did the Trump administration leave on your desk a pile of notebooks as to exactly how to carry out that plan? Did we have a list of which Afghans we were going to evacuate? Did we have a plan to get Americans from all over Afghanistan to Kabul and out in an orderly way? How meticulous was the planning for the Trump administration declared May 1 withdrawal?"

Blinken's response - "We inherited a deadline. We did not inherit a plan" - appeared to crystallize the Biden administration's explanation for what happened: It had inherited a bad situation from the Trump administration, which had cut a deal with the Taliban and greatly reduced the number of troops in the country. It certainly elicited laughter from Sherman, who exclaimed, "No plan at all. It's amazing that it wasn't much, much worse."

But is this really a fair statement?

The deadline that Blinken referenced was May 1. That's the date enshrined in the deal struck between the Trump administration and the Taliban on Feb. 29, 2020.

"The United States is committed to withdraw from Afghanistan all military forces of the United States, its allies, and Coalition partners, including all nondiplomatic civilian personnel, private security contractors, trainers, advisers, and supporting services personnel within fourteen (14) months following announcement of this agreement," the agreement said.

The agreement said that at the time there were 8,600 U.S. forces in Afghanistan and the drawdown would begin within 135 days. It also called for the Afghan government - which was not a party to the agreement - to release 5,000 Taliban fighters from its prisons. The government eventually did that after intense pressure from the Trump administration.

According to an Axios report, President Donald Trump on Nov. 11 signed a decision memo that would have ordered the withdrawal of all U.S. troops by Jan. 15, five days before President Joe Biden took office. But Trump backed down after his top national security advisers erupted in fury and "painted a vivid picture of Kabul falling to the Taliban if U.S. forces withdrew precipitously in the final days of the Trump presidency." 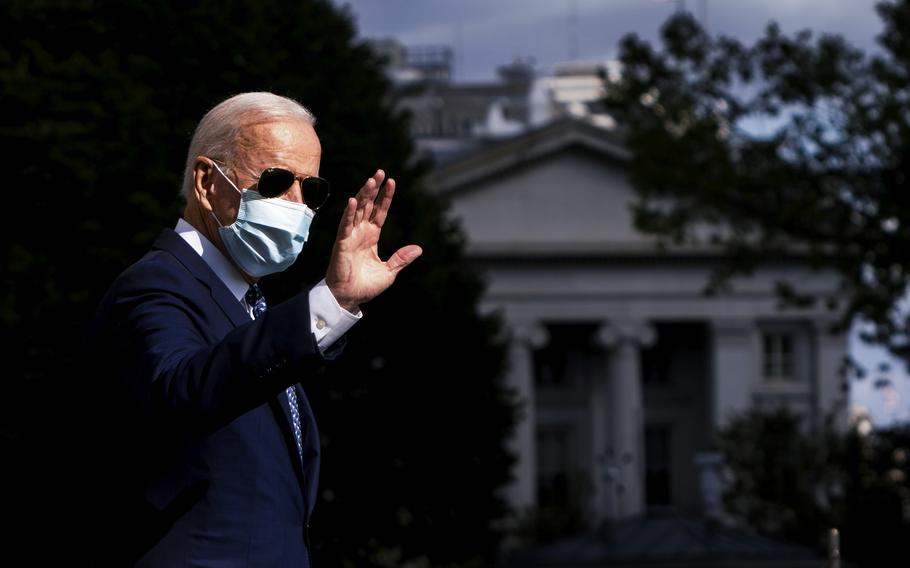 President Joe Biden heads to Marine One as he departs the White House on Monday., Sept. 20, 2021. (Demetrius Freeman/The Washington Post )

Instead, Trump and the military compromised and agreed to reduce U.S. troops from 4,500 to 2,500 by the end of Trump's presidency - a number that was far below what many national security experts thought was necessary. That was the number of troops left in the country when Biden took office 11 months after the U.S.-Taliban agreement was signed. (The actual number ranged toward 3,500 when classified and some other units were included, U.S. military officials told the Wall Street Journal.)

Obviously, it takes planning to reduce troop presence in the country. The Pentagon is filled with people who churn out plans.

"It's true that the military had done some retrograde planning," said a senior defense official. But he said that was only one piece of the puzzle. "There was little evidence of a diplomatic strategy" to accomplish the withdrawal, he said, while outgoing Trump administration officials refused to provide any insights into whether the Taliban was complying with the agreement.

"There was zero visibility on the Doha negotiations," he said, referring to the deal inked with the Taliban.

The Doha agreement was posted on the Internet when it was signed. But a State Department official noted that the Trump administration also announced that the implementing agreements are classified documents. "They are classified because information relating to the movement of U.S. troops and operations against terrorists are sensitive matters, and publicly sharing this information at this time could put American and coalition lives at risk," the Trump administration said.

Former Trump officials, however, say that contrary to Blinken's remarks, they did have a diplomatic strategy and a withdrawal plan - though their recollections conflict with the Axios reporting that Trump at one point ordered a full withdrawal within two months.

"The whole policy strategy going forward was 'Ghani is going to have to deal with the Taliban.' And it wasn't going to be a 50-50 split between the Afghan government and Taliban. We knew that. It was going to be 75-25 [majority Taliban], and then you flip this thing into an interim government," he told Defense One.

He also said that Trump planned to keep 800 troops in the country to wage a counterterrorism mission and provide logistical support to the Afghan military. "We were going to jam Ghani hard and make him cut a deal with the Taliban," he said. "It would have been ugly. It wouldn't have been great. But there was no plan to just leave."

Kash Patel, who was installed as Pentagon chief of staff in the waning days of the administration, said he crafted a withdrawal plan under orders from Trump.

"The Afghan government and the Taliban were both told they would face the full force of the US military if they caused any harm to Americans or American interests in Afghanistan," he wrote in the New York Post. "Next, both parties would negotiate to create an interim-joint government, and both sides had to repudiate al-Qaida. Lastly, a small special-operations force would be stationed in the country to take direct action against any terrorist threats that arose. When all those conditions were met - along with other cascading conditions - then a withdrawal could, and did, begin."

"There was a plan, if he [Blinken] chose not to read it, that's on him," Patel said in a text message to the Fact Checker. "The DoD left extensive paperwork regarding the plans during transition, again they refused to meet with leadership, but the plans are still there. You cannot withdraw from a theater of war without a multitude of DoD components moving their machinery, and that can't happen without paper."

Biden administration officials, for their part, said they received little cooperation and virtually no useful information from their counterparts. They say they had to start all over again.

"You have to remember that Trump said both publicly and privately that he wanted all troops out of Afghanistan by Christmas. And it was only because the military and National Security Council threw sand in the system that there wasn't a complete withdrawal," the State Department official said. "So there were no clear operating instructions - it was a battle merely to avoid what the president had decreed. The military always engages in contingency planning, but it is accurate to say that we did not inherit a plan upon taking office. In fact, the plan even evolved after we developed it."

At early State Department media briefings, the spokesman repeatedly said officials were studying the Doha agreement to determine a path forward. "When it comes to the U.S.-Taliban agreement, we are reviewing what has been negotiated, including that agreement," Ned Price said on Feb. 3.

After a policy was developed, Blinken also tried to jam Ghani. In a letter in early March, leaked to the Afghan media, he urged the completion of a peace agreement between the government and the Taliban and the creation of a "new, inclusive government."

"We are considering the full withdrawal of our forces by May 1st, as we consider other options. Even with the continuation of financial assistance from the United States to your forces after an American military withdrawal, I am concerned the security situation will worsen and that the Taliban could make rapid territorial gains," Blinken wrote, saying he was making the point so that Ghani could understand "the urgency of my tone."

Ultimately, on April 14, Biden announced that he would withdraw all troops by Sept. 11, a date later advanced to Aug. 31 after the military moved faster than expected.

The Biden administration settled on a plan that would have kept 600 troops in Afghanistan, mainly to protect the U.S. Embassy. The military told Biden that far more troops would be needed to both control Bagram air base and protect the embassy, so Biden signed off on a plan that focused on keeping open Kabul's airport and closing Bagram.

Patel said the Trump plan, with 800 troops, would have retained control of Bagram air base. He did not respond to a text message asking whether those troops were also tasked to protect the embassy.

At a hearing on Sept. 14, Sen. Mitt Romney, R-Utah, noted that while Blinken had said the administration said it had inherited a date, it actually did not stick to it.

"You didn't inherit the date, the date was May 1st, and you push it to August 31," Romney observed. "Why didn't you push it much later . . . I don't understand why a date was actually not inherited, and a date was not selected, that would be sufficient to actually remove people from the nation in a way that would be in keeping with our moral commitment to honor our citizens, our green-card holders, as well as those who've worked with us over the years."

"The military told us that in order to do its retrograde, its drawdown from Afghanistan in a safe and orderly way, it needed three to four months," Blinken replied.

"Our expectation was that beyond August 31, beyond the military drawdown, the government, the security forces, were going to remain in control of Kabul, of the major cities, our embassy was fully planned to remain up and running." Blinken added. "We were leaving about 600 military behind to make sure that we could secure the embassy, so that it continues to operate. . . . What was not, what we did not anticipate, was that 11-day collapse of the government security forces. That's what changed everything."

We are faced with the conundrum of dueling narratives. Blinken's line was rather glib, as there are always plans being developed in the military - and it's not as if the Biden plan worked at all as planned.

But at the same time, our experience with the Trump administration shows that any plans that might have been on the shelf or even developed were subject to the whims of a mercurial president. After all, he replaced the top leadership of the Defense Department just months before he left office and, at one point, even ordered a two-month drawdown of all troops in Afghanistan.

Was there a Trump plan and would it have unfolded as planned? That's uncertain. When Biden announced that troops would depart by September, Trump even criticized him for moving too slowly, saying, "We should keep as close to that [May] schedule as possible."

This dispute reminds us of the debate over whether Trump had eliminated a global-pandemic office within the National Security Council, thus contributing to the administration's sluggish response to the coronavirus outbreak. It was not a debate that could be resolved. As one former administration official told the Fact Checker, "there isn't any organizational chart in the U.S. government that makes any difference in the Trump administration. Trump is more likely to say to Jared [Kushner], 'What do you think we should do?' That's the big problem."

That column resulted in no rating and we will render the same verdict here as well.