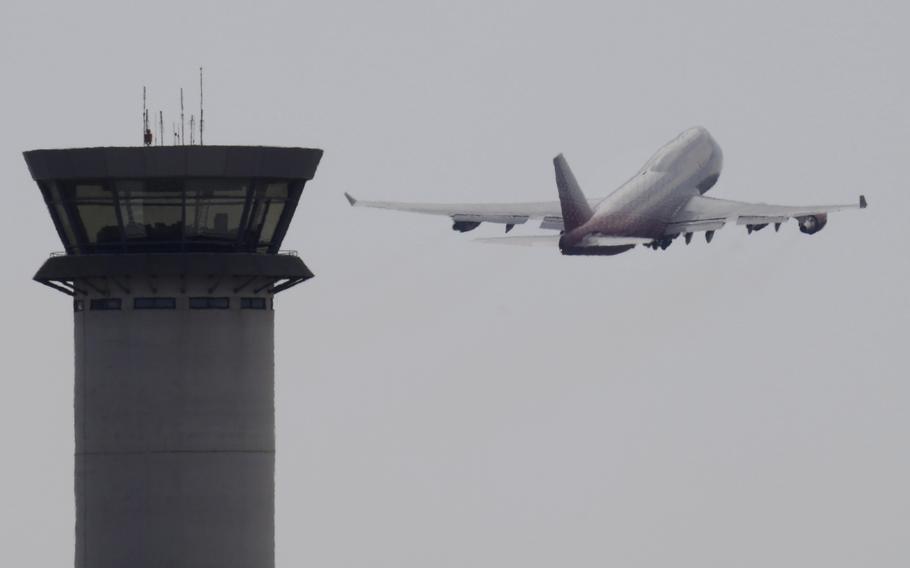 An aircraft takes off from Larnaca airport past the control tower, at the southern coastal city of Larnaca, Cyprus, Oct. 7, 2017. A flight safety organization is warning that a Turkish drone base in ethnically divided Cyprus could increase safety risks for thousands of commercial flights that cross the airspace around the eastern Mediterranean island. (Petros Karadjias/AP)

NICOSIA, Cyprus — A Turkish drone base in the breakaway north of ethnically divided Cyprus could increase safety risks for thousands of commercial flights that cross the airspace around the eastern Mediterranean island, a flight safety group warned Tuesday.

FSF-Med, an NGO affiliated with the Washington, D.C.-based International Flight Safety Foundation, said the planned upgrading of the Turkish air base in Gecitkale — called Lefkoniko in Greek — may compound a communications and coordination problem between aviation authorities in Turkey and Cyprus that has already compromised flight safety for years.

An intelligence report obtained by The Associated Press suggests that the Gecitkale base will be expanded to host both armed and unarmed Bayraktar TV2 drones, surveillance aircraft, training planes and advanced fighter jets.

Cyprus was split into a breakaway Turkish Cypriot north and an internationally recognized Greek Cypriot south in 1974 when Turkey invaded following a coup by supporters of union with Greece.

Turkish Cypriots declared an independent state nearly a decade later, but only Turkey recognizes it. Although Turkish Cypriots say they control air traffic in airspace in the northern half of Cyprus, aviation authorities including the International Civil Aviation Organization don't recognize it.

Despite this, Turkish and Turkish Cypriot air traffic control authorities don't communicate with the island's internationally recognized Nicosia ATC in the south and often issue conflicting instructions to passing civilian aircraft, resulting in numerous near misses between passenger planes in the past that the AP uncovered in 2011.

The danger is heightened because Turkish military aircraft don't share flight plans with Cypriot government authorities and could fly close to civilian aircraft.

The International Federation of Air Line Pilots' Associations (IFALPA) cited a recent European Union Air Safety Agency (EASA) study that the potential consequences of such conflicting instructions to civilian jets "could be detrimental to flight safety for aircraft" operating in the region. The same study recorded 166 "incidents" took place inside airspace controlled by Nicosia ATC in 2019, without specifying the exact nature of the incidents. The same study indicated that between 2016-18, there were 276, 260 and 254 "incidents" respectively.

FSF-MED said it would press international and European aviation safety bodies to express its concerns over the added risks posed by the drone base and to ask them to compel Turkey to comply with international air safety rules.

"FSF-MED will also stress that in case of an accident, responsibility won't burden only Turkey, which is contravening international rules, but also those who could have forced the country to cease its violations but didn't do it," the organization said.