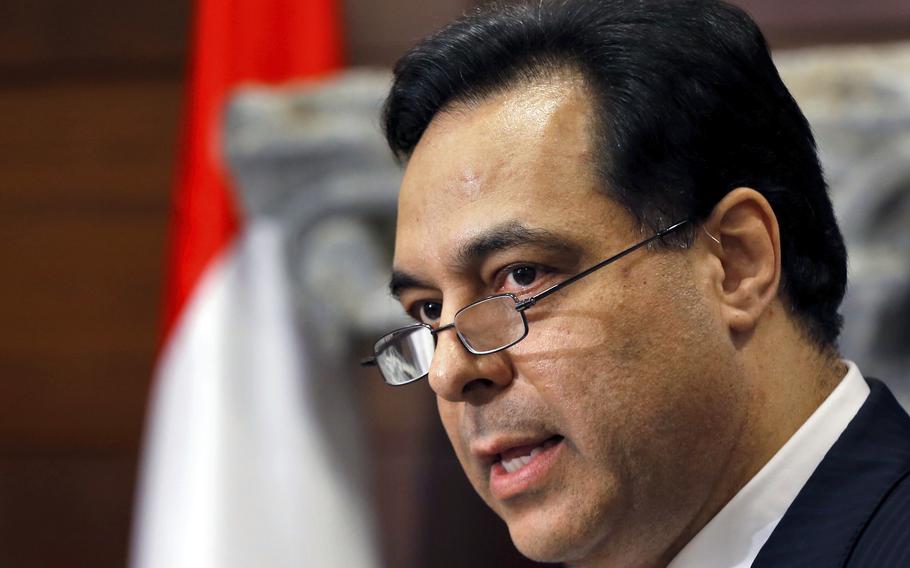 Then Lebanese Prime Minister Hassan Diab speaks during a press conference at the Presidential Palace in Baabda, east of Beirut, Lebanon, Jan. 21, 2020. The state-run National News Agency reported Thursday, Aug 26, 2021, that a Lebanese judge leading the investigation into last year's massive explosion at Beirut's port issued a subpoena for Diab, the country's caretaker prime minister, after he failed to show up for questioning. (Bilal Hussein/AP)

BEIRUT — Lebanon's former prime minister left the country for the United States on Tuesday, his advisor said, despite a subpoena from the judge investigating last year's devastating explosion at Beirut port.

Hassan Diab was the country's prime minister when the explosion happened on Aug. 4, 2020. He resigned after the blast that killed over 200 people and injured over 6,000, leaving large parts of the city devastated.

As caretaker prime minister, Diab was summoned by investigative judge Tarek Bitar on accusations of intentional killing and negligence. Diab declined to be interrogated as a defendant, saying he had given his testimony in the case. Diab holds that the judges investigating the case have violated Lebanese laws that require that as a senior government official he can only be summoned after the parliament approves.

When Diab failed to show up last month for investigation, Bitar issued a subpoena and the new date for questioning was set for next Monday.

On Tuesday, Bitar issued a new subpoena to include his home address after he stepped down from the premiership.

"He has nothing new to say," said Laila Hatoum, Diab's advisor. "He considers that he has nothing to do with all that until the parliament decides the course of action."

Hatoum said Diab left for a pre-planned trip to visit his children who are studying in the United States. He has not seen them since he took office, she said.

Hundreds of tons of ammonium nitrate, a highly explosive material used in fertilizers that had been improperly stored in the port for years, exploded on Aug. 4, 2020. The probe shows that most government officials knew of the dangerous material stored at the port.

Diab told The Associated Press in an interview last year that he was being singled out and charged while others knew more.