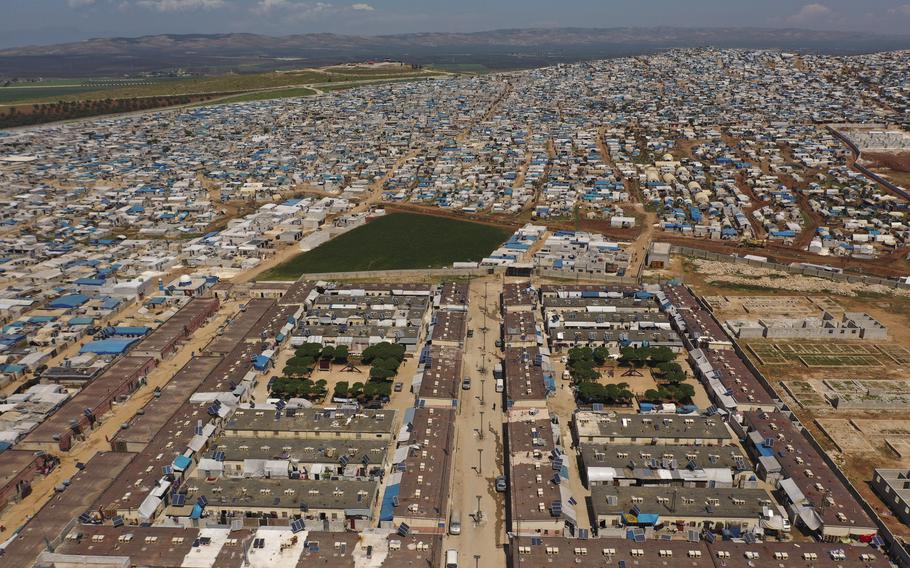 In this April 19, 2020, file photo, shows a large refugee camp on the Syrian side of the border with Turkey, near the town of Atma, in Idlib province, Syria. (Ghaith Alsayed/AP)

ISTANBUL — Turkey is working with the U.N.'s refugee agency to repatriate Syrians to their home country, the Turkish foreign minister said Sunday.

His comments are at odds with the UNHCR's overall policy towards returning migrants to Syria, a country that it still considers too dangerous to send refugees back to.

"We are now receiving better support from the international community for the safe return and repatriation of refugees," Turkish Foreign Minister Mevlut Cavusoglu said. "We are working to repatriate refugees, especially in Syria, especially with the U.N. High Commissioner for Refugees."

Responding to those remarks, UNHCR spokesperson Selin Unal said only a political solution in Syria would allow people to return, adding that refugees should have the right to voluntarily return in "safe and dignified conditions."

Cavusoglu was speaking at a ceremony in the southern province of Antalya followed a visit to Turkey days earlier by UNHCR chief Filippo Grandi, during which he met Cavusoglu and Turkish President Recep Tayyip Erdogan.

Cavusoglu said the international community must work together to resolve migration.

"It's not right to look at this from a security standpoint," he said. "It's wrong to look at it in a racist and fascist way. On the other hand, if it is a social problem, it is necessary to evaluate it calmly together and find a solution by producing new policies."

In 2016, Turkey signed a deal with the European Union to keep Syrians from moving to Europe in return for funding after more than 1 million migrants from Syria and elsewhere entered the 27-nation bloc in 2015.