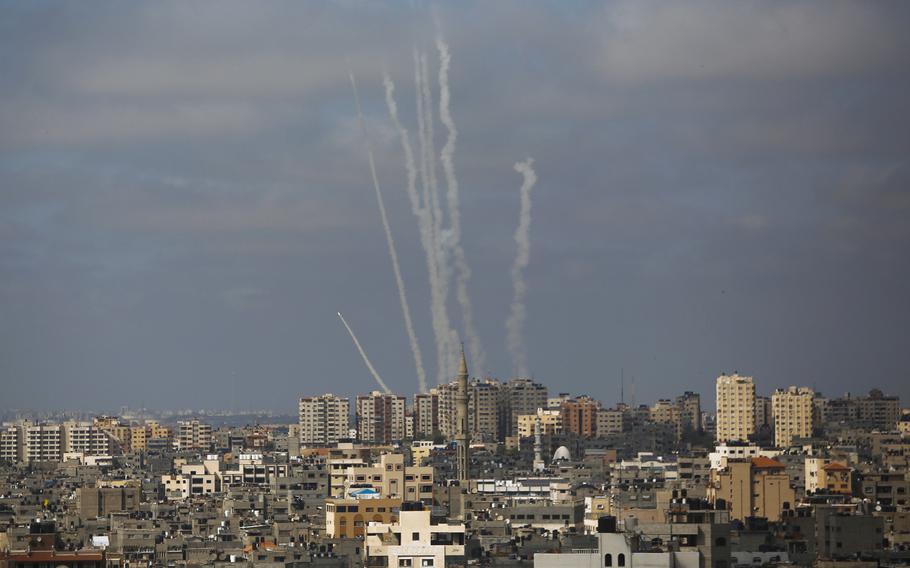 In this May 20, 2021 file photo, rockets are launched from the Gaza Strip towards Israel, in Gaza City. (Hatem Moussa/AP)

JERUSALEM — Palestinian militants launched a rocket into Israel from the Gaza Strip on Sunday night, the Israeli military said, adding that the rocket was intercepted.

The launch came at a time of heightened tensions following an escape by six Palestinian militants from an Israeli prison last week and lingering hostilities from an 11-day war last May.

Israel over the weekend captured four of the six escaped prisoners and stepped up its search for the two remaining fugitives.

The tensions have been worsened by ongoing difficulties in reaching a long-term cease-fire between Israel and Hamas following the war in May.

Egypt has been trying to broker an agreement. Hamas has demanded that Israel lift a painful economic blockade of Gaza, while Israel wants Hamas to release two Israeli civilians and return the remains of two dead Israeli soldiers it is holding.

Israel and Hamas have also not been able to agree upon a system for allowing Qatar to deliver welfare payments to thousands of Gaza families.

Israel says it is seeking guarantees that Hamas does not divert any of the funds for military use.