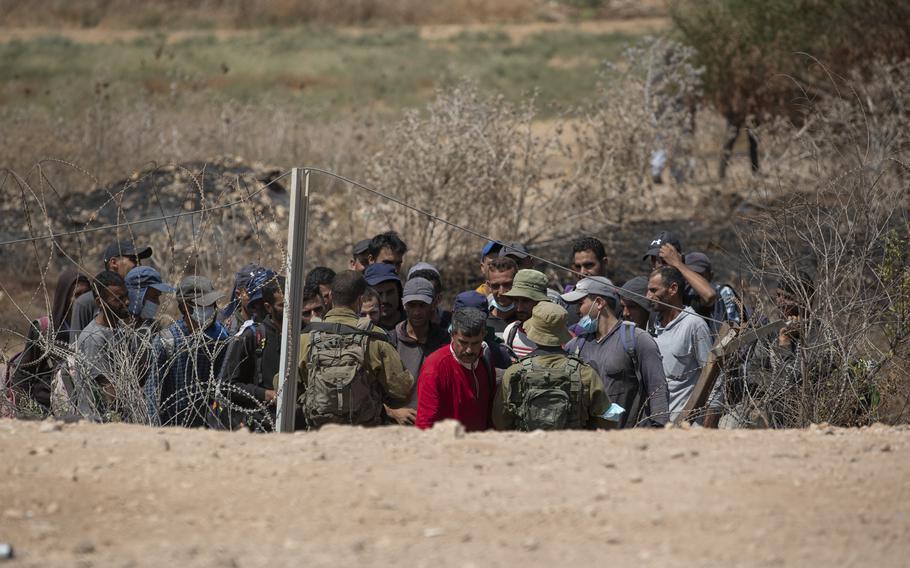 Israeli troops carry out security checks on Palestinian laborers in the West Bank village of Jalameh, on Monday, Sept. 6, 2021. Israel on Tuesday launched airstrikes on Gaza sites after incendiary balloons were sent into Israel. (Nasser Nasser/AP)

TEL AVIV, Israel — Israel launched airstrikes on what it said was a militant site in the Gaza Strip early Tuesday after Palestinians sent incendiary balloons into Israel in support of six Palestinian prisoners who had escaped from an Israeli prison the day before.

Israeli forces were still scouring the country's north and the occupied West Bank for the escapees after the biggest prison break of its kind in decades.

Fighter jets struck a Hamas rocket manufacturing workshop as well as a Hamas military compound in Khan Yunis, a city in southern Gaza, according to the army statement. The army said the compound houses a cement factory used for building militant tunnels.

The strikes came in response to incendiary balloons launched by Gaza's ruling Hamas movement into Israeli territory, the army said. The devices were a show of support for the prison break, which Hamas and other Palestinian militants hailed as a heroic victory.

For Israel, the escape — through a secret tunnel, likely with outside help — marks an embarrassing security breach. The massive manhunt through Israel's north and the occupied West Bank continued on Tuesday as Jews celebrated Rosh Hashana, the Jewish new year.

The prisoners appear to have gone into hiding after crawling through a narrow tunnel leading from the floor of their cell to a hole outside the prison walls.

The escape marked an awkward moment for Israel's new coalition government as it seeks to maintain calm after the deadly 11-day war with Hamas in May and amid a surge in coronavirus infections.

Palestinians consider prisoners held by Israel to be heroes of their national cause, and many celebrated the escape on social media. Efforts to capture the six will likely draw attention to the Palestinian Authority's security coordination with Israel, which is deeply unpopular among Palestinians.

"Every Palestinian prisoner wants freedom, and they have the right to seek out any path to freedom," Palestinian Prime Minister Mohammad Shtayyeh told reporters Tuesday, without directly referring to the escape. He reiterated the PA's longstanding demand that Israel release all Palestinian prisoners.

Israel has erected roadblocks and is conducting patrols in the area. Israel's Army Radio said 400 prisoners are being moved as a protective measure against any additional escape attempts.

It was the biggest Palestinian escape from an Israeli prison since 1987, when six militants from the Islamic Jihad group broke out of a heavily guarded prison in Gaza months before the outbreak of the first intifada, or Palestinian uprising against Israel.

The six who escaped early Monday come from Jenin, in the occupied West Bank, about 25 kilometers (15 miles) away. The internationally recognized Palestinian Authority wields little control in the town, where militants in recent weeks have clashed with Israeli forces.

The Palestinian Prisoners' Club, which represents both former and current prisoners, identified the men as ranging in age from 26 to 49 years old.

The most well-known among them is Zakaria Zubeidi, 46, who was a prominent leader in the Al-Aqsa Martyrs Brigade, an armed group affiliated with Fatah, during the second intifada from 2000-2005. He was later granted amnesty along with other Fatah-affiliated militants, but was arrested again in 2019 on what Israeli authorities said were new terror suspicions.

As a child, Zubeidi had been part of a children's theater troupe in Jenin established by Arna Mer-Khamis, an Israeli rights activist, that was the subject of a 2004 documentary.

The other five prisoners were members of the Islamic Jihad militant group, and the prisoners' group said four were serving life sentences.

The escape poses a dilemma for Palestinian President Mahmoud Abbas, who met with Israeli Defense Minister Benny Gantz a week ago in the first high-level meeting between the two sides in years. Abbas has said he hopes to revive the peace process after more than a decade-long hiatus under former Israeli Prime Minister Benjamin Netanyahu.

But Abbas' Palestinian Authority is deeply unpopular. He canceled the first elections in 15 years in April when it appeared his Fatah party would suffer an embarrassing defeat. The PA was largely sidelined during the Gaza war in May, and it has cracked down on a wave of protests following the death of an activist in its custody in June.

PA security forces coordinate with Israel to target Hamas and other militants that both view as a threat. But any effort to help Israel re-arrest the escaped prisoners risks further undermining the PA in the eyes of Palestinians.