Jordanian soldier from 1967 war laid to rest in Jerusalem 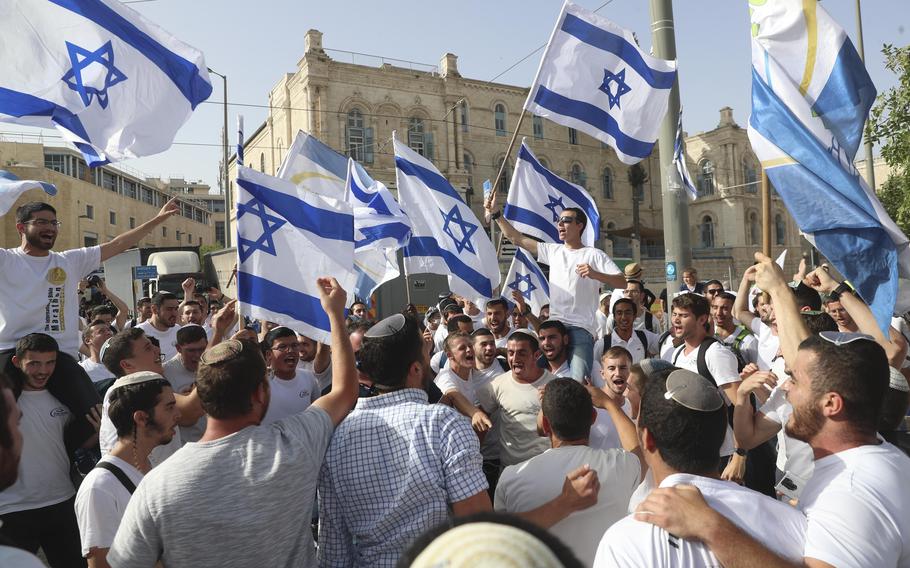 In this May 10, 2021, file photo, Israelis wave national flags during a Jerusalem Day parade, in Jerusalem. (Ariel Schalit/AP)

JERUSALEM — A Jordanian soldier killed in the 1967 Middle East war was given a military funeral and laid to rest in east Jerusalem on Monday, in an extraordinary scene that pointed to improved ties between Israel and Jordan after years of tensions.

The soldier's remains were discovered last month during construction work at Ammunition Hill, the site of a famous battle between Israeli and Jordanian forces. Funeral prayers were held at the Al-Aqsa mosque and a Jordanian honor guard in uniform, with red-checkered headscarves wrapped around their faces, carried the casket to a nearby Islamic cemetery.

Israel captured east Jerusalem and the West Bank from Jordan in the 1967 war. The Palestinians want both territories to be part of their future state, a position with strong Jordanian support. The kingdom gave up its territorial claims decades ago but remains the custodian of Al-Aqsa and other religious sites in east Jerusalem.

Israel annexed east Jerusalem in a move not recognized internationally and considers the entire city to be its unified capital. Al-Aqsa is the third holiest site in Islam and the holiest for Jews, who refer to it as the Temple Mount because it was the site of the Jewish temples in antiquity.

Jerusalem and its holy sites are at the heart of the Israeli-Palestinian conflict and have been the epicenter of several waves of violence, most recently in May, when tensions over Jerusalem helped ignite the 11-day Gaza war.

Israel and Jordan signed a peace agreement in 1994 and maintain close security ties. But tensions over Jerusalem and the moribund peace process with the Palestinians spiked during the 12-year-rule of Israeli Prime Minister Benjamin Netanyahu, who was replaced in June.

The new Israeli government, led by Prime Minister Naftali Bennett, has sought to repair relations with Jordan. Bennett met with Jordan's King Abdullah II in secret less than two months ago, and in the following week the two countries signed breakthrough deals on water and trade.

Earlier this week, Israel's new President Isaac Herzog, who holds a mostly ceremonial office, met with the king at his palace in Amman, the Jordanian capital.

Jordan is a close Western ally that has long been seen as a bastion of stability in the volatile Middle East and a key partner in the peace process.