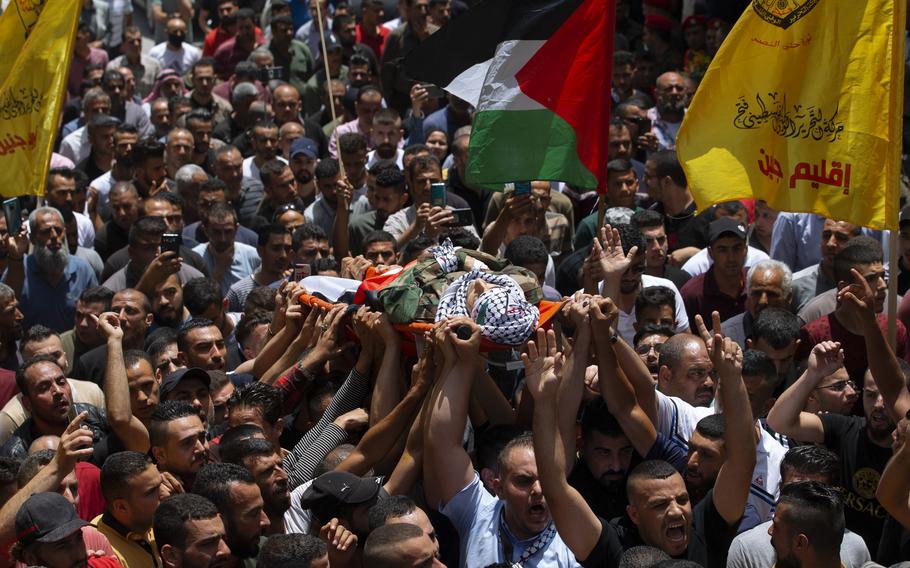 JENIN, West Bank — Israeli troops shot and killed three Palestinians, including two security officers, in a shootout that erupted in the occupied West Bank town of Jenin during what appeared to be an Israeli arrest raid overnight, Palestinian officials said Thursday.

Israel and the Palestinian Authority coordinate security operations in the territory against Hamas and other militant groups seen as a threat to both of them. The coordination has contributed to mounting anger at the PA among Palestinians.

A spokesman for Palestinian President Mahmoud Abbas condemned what he called a "dangerous Israeli escalation," saying the three were killed by Israeli special forces who disguise themselves as Arabs during arrest raids. The spokesman, Nabil Abu Rdeneh, called on the international community and the United States to intervene to halt such attacks.

The Israeli military and police did not immediately respond to requests for comment. Israeli media reported that special forces went into Jenin to arrest two operatives from the Islamic Jihad militant group when they came under fire. One of the Palestinian suspects was killed, in addition to the two security officers, the media reports said.

There were no reports of any Israeli casualties.

The PA said the two officers who were killed, Adham Aliwi, 23, and Tayseer Issa, 33, were members of its military intelligence force. Islamic Jihad identified the third man as Jamil Alamouri, one of its fighters.

Online video appears to show Palestinian officers taking cover behind a vehicle as gunshots are heard in the background. One shouts that they are exchanging fire with Israeli "undercover" forces.

Under interim peace agreements signed in the 1990s, the Palestinian Authority has limited autonomy in scattered enclaves that together make up around 40% of the occupied West Bank. Hamas drove its forces out of Gaza in 2007 when the Islamic militant group seized power.

Israel has overarching security authority in the West Bank and routinely carries out arrest raids in Palestinian cities and towns administered by the PA.

Abbas called off the first Palestinian elections in 15 years in April when it appeared his fractured Fatah party would suffer another embarrassing defeat to Hamas, and he was largely sidelined during last month's Gaza war.

Abbas is committed to a negotiated solution that would create a Palestinian state in the occupied West Bank, east Jerusalem and Gaza, which Israel seized in the 1967 Mideast war. But there have been no substantive peace negotiations in more than a decade.