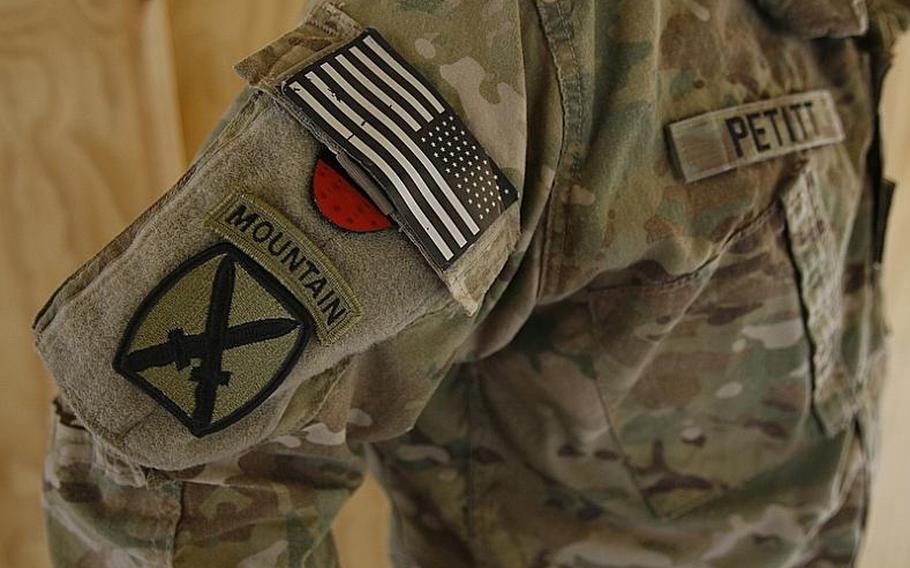 Buy Photo
Staff Sgt. Bruce Petitt, 3rd Brigade Combat Team, 10th Mountain Division, wears his tourniquet with the pull tab exposed on June 26, 2011, at Forward Operating Base Pasab, Afghanistan. A new policy within the division requires all soldiers to wear tourniquets on their right shoulder with the pull-tab exposed. (Laura Rauch/Stars and Stripes)

FORWARD OPERATING BASE PASAB, Afghanistan &mdash; In an effort to reduce the number of deaths from improvised explosive device attacks in Kandahar province, the 10th Mountain Division&rsquo;s 3rd Brigade Combat Team has implemented a tourniquet policy. It requires soldiers to wear the small life-saving device in their right shoulder pockets with its red pull-tab exposed.

Exposing the tab was initiated by the brigade&rsquo;s hard-hit 4th Battalion, 25th Artillery Regiment. The practice quickly gained the attention of Regional Command-South Command Sgt. Maj. Christopher Greca, who recently made it RC-South policy. Within a week, the red half circles of the pull-tab appeared on nearly every soldier&rsquo;s uniform.

Though a seemingly small measure, soldiers here are hoping it saves lives.

&ldquo;Seemingly small, but huge,&rdquo; said 3rd Brigade Sgt. Major Jimmy Carabello, who led Task Force Spartan&rsquo;s implementation of the policy. &ldquo;We owe it to them to put every measure in place to save their lives.&rdquo;

While soldiers are already required to carry a tourniquet in a first-aid kit on their body armor, many had been storing a secondary in their pants pocket near the ankle. Because of the heinous nature of an IED attack, where insurgents design the blast to maim soldiers as well as kill them, tourniquets stored on a lower limb have too great a potential of being lost in the blast.

Since deploying in March, 17 of 3rd brigade&rsquo;s soldiers have suffered amputations due to IED attacks. Many have lost multiple limbs.

&ldquo;Chances are, if a soldier is involved in an IED blast, they&rsquo;re going to need more than one tourniquet,&rdquo; Staff Sgt. Garrick Morgenweck, a flight medic with Company C, 1st Battalion, 52nd Aviation Regiment said. During three combat tours in Iraq and Afghanistan, Morgenweck has treated more than 100 people who lost limbs.

&ldquo;By putting a tourniquet in the right pocket, and making that the standard, any medic or soldier in RC-South now knows where they can find two tourniquets.&rdquo;