10 dead in attack on Afghan government building in Jalalabad 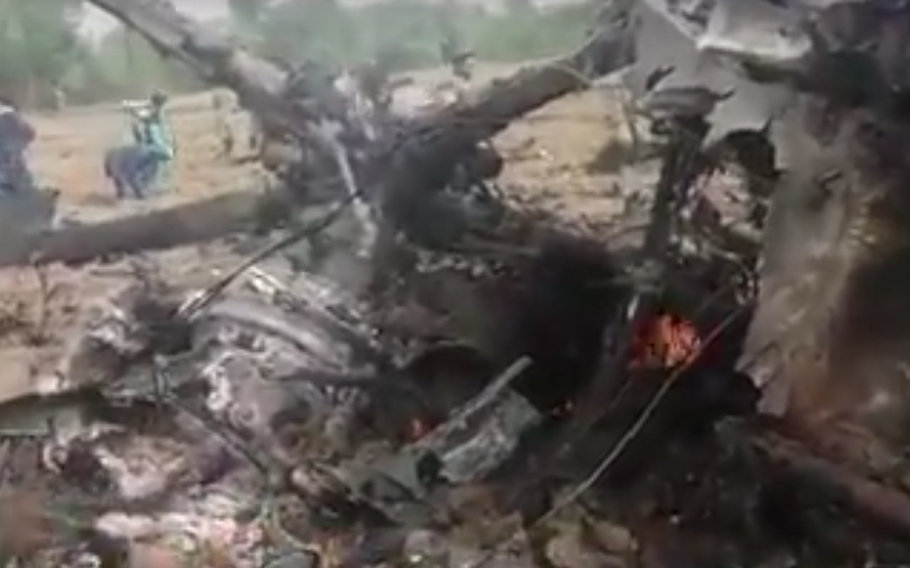 A video released by the Taliban appears to show a destroyed Afghan helicopter in Helmand province on Sunday, May 13, 2018. The Taliban claimed to have shot the aircraft down, but Afghan officials said it made an emergency landing due to technical difficulties and was destroyed by government troops. (Screengrab from Taliban video)

Earlier in the day, an Afghan helicopter made a hard landing in the southern Helmand province and was destroyed, the military said.

The attack on a revenue department office in Nangarhar’s capital, Jalalabad, began around noon when a suicide car bomb went off outside the building, said Attahullah Khogyani, the provincial governor’s spokesman. Gunmen stormed the building after the blast and a gunbattle ensued for hours, he said, though he did not say how many armed assailants there were.

Eyewitnesses told Pajhwok Afghan News that two attackers had lobbed grenades into the building before other men stormed in.

The four-hour siege left nine people dead and 39 wounded, including staff of the revenue office, civilians and children, Khogyani said. Khogyani later reported a tenth person was reported killed as a result of the siege.

The provincial governor, Mohammad Gulab Mangal, submitted his resignation to the government body responsible for overseeing local governance, Khogyani confirmed, but he did not say why Mangal had resigned or whether it was related to the attack.

No one immediately claimed responsibility for the attack. Both the Taliban and the Islamic State are active in Nangarhar and have carried out a number of attacks there.

Sunday’s violence is the latest in a series of deadly attacks throughout the country, as Afghan forces struggle to combat rebel and terrorist groups. Since the withdrawal of most foreign combat forces in 2014, the Taliban has resurged, taking control or influence over nearly 15 percent of the country’s 407 districts, according to a government watchdog report released earlier this month. It has been aggressively fighting to expand its territory since the launch of a spring offensive last month.

Afghan security forces were battling insurgents in several parts of the country Sunday. Eight police officers were reportedly killed in Kunduz in the north. In northwestern Faryab province, local media reported that rebels had killed six soldiers, captured four others and seized various weapons and equipment after overrunning a strategic area of a central district there.

In the south, the Taliban claimed to have shot down a military helicopter during a nighttime mission in Helmand province, killing all aboard.

The insurgent group frequently embellishes or fabricates tales of its successes. The militants released a video of the wreck, showing small fires still burning as children and men crowd around the twisted metal and some stand on the charred hull.

“They came here with a big plan, they had a lot of tanks and vehicles, then a young Mujahed shot it with an RPG and it crashed it to the ground,” a man in the video says, using the Arabic term for a holy warrior and referring to a rocket-propelled grenade. “All the Muslims and Mujahedeen cheered.”

The Afghan Defense Ministry said the helicopter made an emergency hard landing due to a technical problem. It had been on a late-night security operation in the province’s Nahr-e Saraj district. The crew was transported to nearby Camp Shorab unharmed, the government said. Officials said government forces then destroyed the disabled aircraft.

Afghan officials would not confirm what airframe was involved, but based on its paint scheme and other physical details visible in the video, it appeared to be an Mi-17.

The U.S. began providing Black Hawks to the Afghan military and training pilots and crews as part of an effort to replace its battle-worn fleet of about 75 Mi-17s, currently the workhorses of the Afghan air force and special operations units. The Pentagon predicts the aging fleet will become unsustainable by the middle of 2019, largely because of difficulties in obtaining parts for the airframes due to sanctions against Russia.