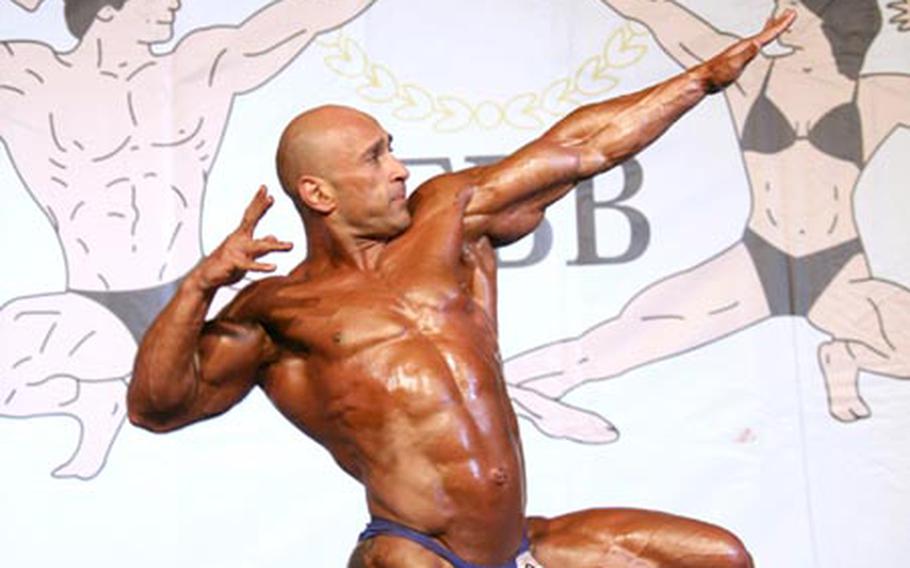 "Lino," as he&#8217;s called by Americans here in at the U.S. Navy base in Naples, recently took the third place title for all of Italy in the Italian International Federation of Body Building and Fitness competition, held in June in Bari. As the gym&#8217;s fitness leader, he mostly works with sailors who are at risk of being kicked out of the Navy for not meeting fitness standards.

How did you become involved in bodybuilding? I started wrestling when I was young, about 13. It was an activity after school. In Italy, parents often put their kids in after-school programs to keep them out of trouble. I started in bodybuilding for a few reasons: It&#8217;s a sport where you can make money and be a professional, and it&#8217;s a sport where you can actually change what the good Lord didn&#8217;t give you. You might inherit from your father, for example, small shoulders, but with bodybuilding you can actually change all that. Muscle grows.

How soon after you start working out do you see a change in your body, and does that change inspire you to work harder? Small changes are almost immediate, but you can really start to see the development, the transformation of your body, within six to seven months of starting a regime. And yes, you see it and think "no limits" and work harder. It&#8217;s very satisfying.Italians, I&#8217;ve noticed, are different from Americans in working out, however. Not the professional bodybuilders, but the ones who want to get in shape. Italians strive for full body symmetry. It&#8217;s funny, I see some Americans who focus on their arms and shoulders and abs, and get big, but then have skinny, skinny legs or a very small butt. It&#8217;s like they work on what they see in the morning in the mirror when they&#8217;re brushing their teeth. I try to get them to work on the whole body.

How long did it take you to prepare for this summer&#8217;s IFBB competition? About 19 months. It took me that long to get down to 5 percent body fat and 236 pounds. I participated in two competitions. The first was for central/southern Italy, and I took first place. (Competition in the nation is divided into three regional competitions: northern Italy, central/southern Italy, and southern Italy and the islands.)The last two months before a competition, I work on four elements of strengthening and building muscles for 80 minutes each, every day.To prepare, I eat every hour-and-a-half [hours], about five ounces of protein, either beef, chicken or fish, and then a few vegetables and very little carbohydrates, mainly brown rice or oatmeal. You have to keep your metabolism going.

Now what? Now, I take a break. I&#8217;m actually looking for a sponsor for more competitions.

Interview conducted by Sandra Jontz. Know someone whose accomplishments, talents, job, hobby, volunteer work, awards or good deeds qualify them for 15 minutes of fame? How about someone whose claim to glory is a bit out of the ordinary &#8212; even, dare we say, oddball? Send the person&#8217;s name and contact information to: news@estripes.osd.mil.