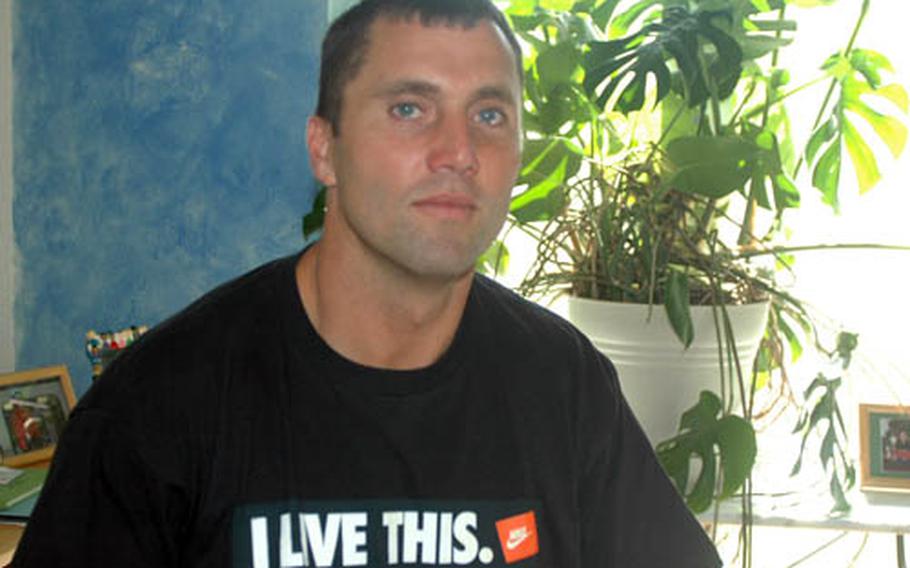 After playing football at Lenoir-Rhyne College in Hickory, N.C., Carpenter has played for 10 seasons in Europe, including as player-coach since 2001 for the Stuttgart Scorpions in the German Football League. Some of the players are paid, some are not. The Scorpions&#8217; final home game is Saturday at Gazi Stadium, followed by playoffs.

Playing with and coaching Germans &#8212; what is that like? One of the things you have to get used to is a lot of the German guys think of football as a hobby as opposed to a job like it is for some of us. It&#8217;s gotten better over the years. Sometimes, though, you have guys who would just take off during the season and go on vacation.

How are the players different from American players? There are some German guys who are really talented. Some go to the U.S. to play college football. With a lot of the Germans the skill level is different. U.S. kids start playing tackle football when they&#8217;re 5, 6 years old. Here, they can&#8217;t start until age 15. For them, it&#8217;s starting a lot later for tackling and doing some of the other things full-blown.

Do they follow American football? There are so many of these German players &#8212; a lot of times they come to me, talking about (an NFL) player, quoting some stats, things I&#8217;d never even think about. They really pay close attention to it. They&#8217;re big stats guys.

Are they tough? Some are tough, but there are some who, if they get a little dinged up, they kind of have that mentality &#8212; OK, go to the doctor, get a note, get out of work. They think the same thing on the football field &#8212; if they get dinged up, they get to sit out of practice. That is one of the hard things to teach them &#8212; being tough.

It is. But there are some guys I played with who are mean and nasty. That&#8217;s a good thing in football.

Do you guys have groupies? When I was (playing) in Hamburg, it was unbelievable. We probably averaged 10,000 spectators per home game. And there was a groupie base that was unbelievable. There&#8217;d be girls wanting you to sign autographs on their chests. &#8230;

Definitely. But in Stuttgart, there are not so many groupies here.

It&#8217;s more conservative than Hamburg? I think so. In Hamburg it was nonstop.

You played in Amsterdam (in NFL-Europe). What was that like? I played there for one season. To play at that level, with guys who are allocated from NFL teams, it was a dream come true. But when I did go there and play I was already 27. It was one of those last-chance deals. After I played one season they told me "You&#8217;re pretty much already too old (for the NFL)." I&#8217;m grateful for being able to play there.

Interview conducted by Charlie Coon. Know someone whose accomplishments, talents, job, hobby, volunteer work, awards or good deeds qualify them for 15 minutes of fame? How about someone whose claim to glory is a bit out of the ordinary &#8212; even, dare we say, oddball? Send the person&#8217;s name and contact information to: news@estripes.osd.mil.