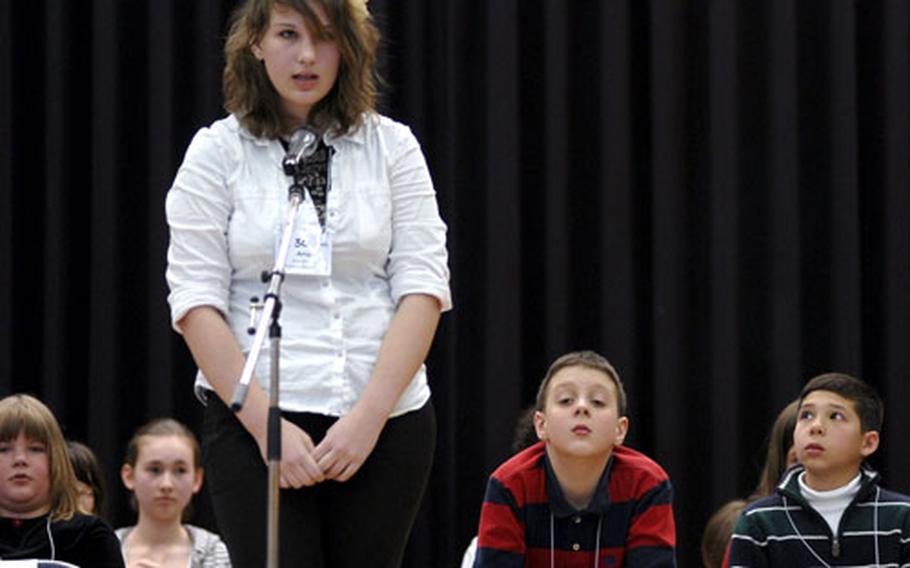 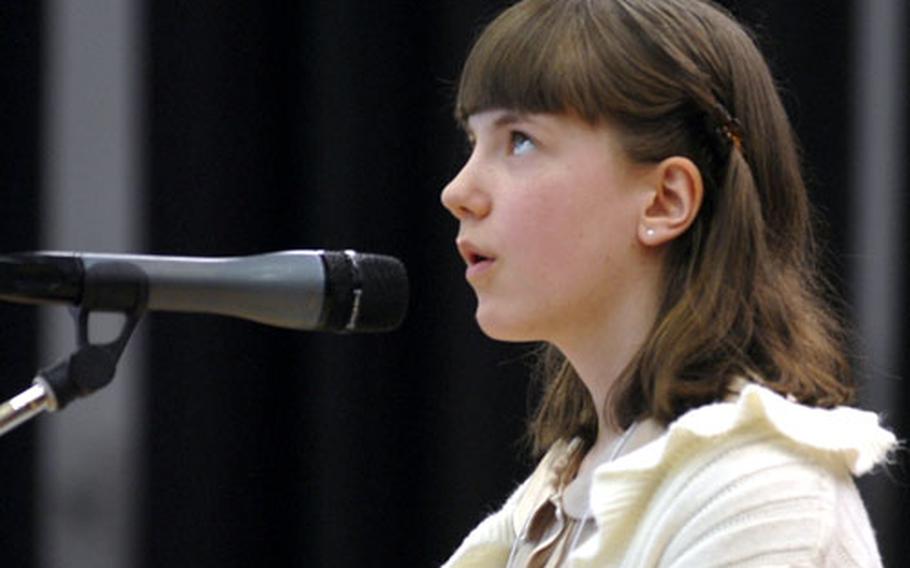 RAMSTEIN AIR BASE, Germany &#8212; Of the 11 words Aria Sharon spelled correctly, she couldn&#8217;t recall which was the hardest.

It was all a blur for the soft-spoken Netzaberg Middle School eighth-grader who had just won the 27th annual European PTA Spelling Bee Final.

In a competition of words and nerves Saturday at Ramstein Elementary School, Aria topped 33 spellers from military schools across Europe to win a trip to Washington, D.C., and a coveted spot in the Scripps National Spelling Bee in May.

"Sort of disbelief," is how Aria, 13, described her feelings moments after spelling "edelweiss" to earn the win.

The bee lasted 10 rounds and two hours, with Aria surviving into the final round with Alyssa Binosa, of Landstuhl Elementary/Middle School, and Savannah Tudlong, of Heidelberg&#8217;s Mark Twain Elementary School.

Savannah stumbled on the tricky "sarsaparilla," while Alyssa bowed out on "Rottweiler." Aria nailed "debacle" to give herself a shot at the championship word and the win. In the tiebreaker for second, Alyssa emerged as runner-up with correct spellings of "Anschluss" and "sleuth."

The contestants ranged from grades three to eight. All had won their school spelling bees to move on to the Europe-level competition, which was organized by the European parent-teacher association to give overseas military students "the opportunity to participate [in the national spelling bee], the same as children in the states," said Mary Wilson, the spelling bee chairwoman.

Scripps provided the words for the contest, Wilson said, a list that only she had access to. Though they only had one chance to spell a word correctly, contestants could ask the pronouncer to repeat the word, use it in a sentence or provide the definition or the language of origin.

Words that tripped pupils up in the first round included "rehearse," "stethoscope," "yacht" and "orchard."

Defeat stung, with some contestants crying on the shoulder of mom or dad after being eliminated. After wiping away her tears, Savannah wore a big smile. "I had a great time," the fifth-grader said.

Aria said her parents drilled her, "going over and over the book until I got it right," referring to the official spelling study booklet from Scripps.

Aria has her work cut out for her as she advances to the next round. According to the Scripps&#8217; spelling bee Web site, the winning words the last three years have been: "Ursprache," "serrefine" and "guerdon."