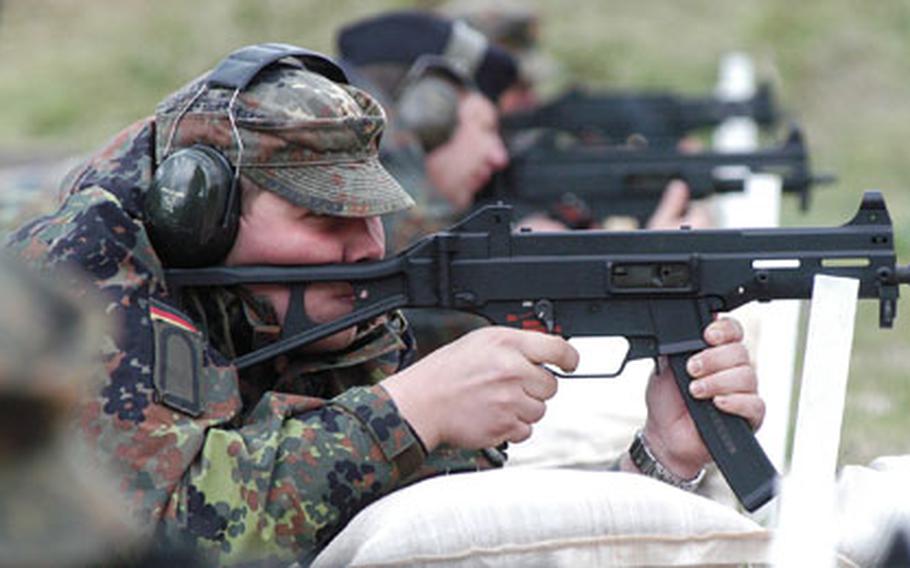 Simon Brorsen, a German soldier, fires a UMP, an assault rifle used by the German version of the FBI. (Matt Millham / S&S)

Simon Brorsen, a German soldier, fires a UMP, an assault rifle used by the German version of the FBI. (Matt Millham / S&S) 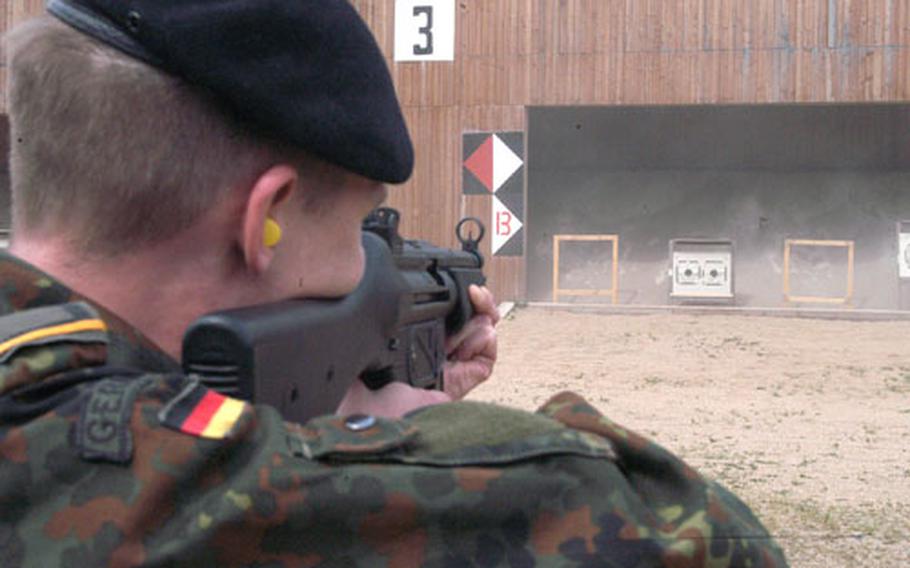 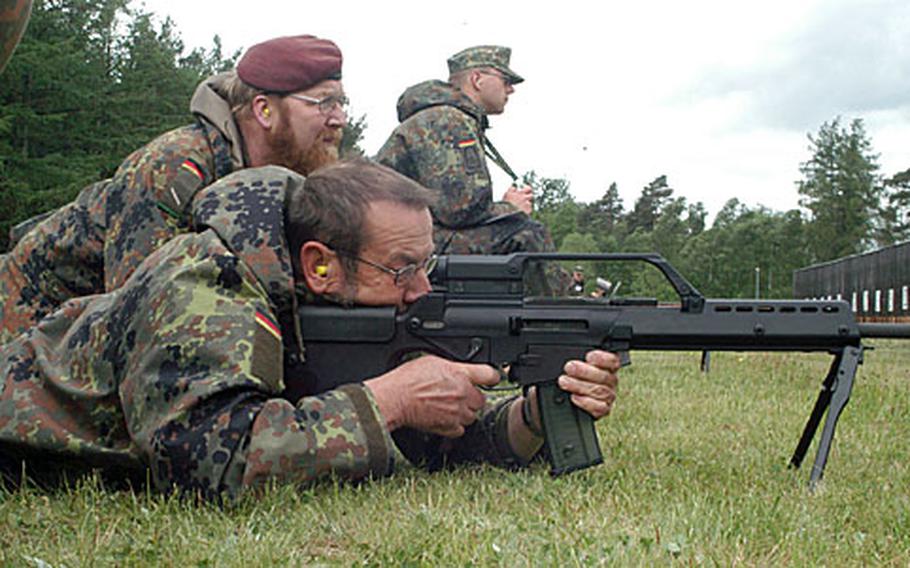 A German team of four competes in the 300-meter shooting competition, the only actual competition at the Monte Kali International Shooting Competition. (Matt Millham / S&S)

The following clarification to this story was posted May 18, 2007: A May 14 story incorrectly translated remarks made by Udo W. Henke, mayor of Messel, Germany. Henke said the German reserve organization RK Giesel bought flower arrangements in appreciation for the hospitality and understanding of residents who live near a sports club where shooting competition participants camped. Many competition participants did partake in a party Friday evening, but it ended early and the noise was no problem, Henke said.

MESSEL, Germany &#8212; Continental Europeans have a lot of things to bond over. There&#8217;s the European Union, the euro and, believe it or not, guns.

This year&#8217;s Monte Kali International Shooting Competition, the most highly attended shooting competition in Europe, drew more than 5,600 people from 13 nations &#8212; a record number of participants &#8212; to the U.S. rifle range near this tiny town on the outskirts of Darmstadt on Friday and Saturday.

Many of the shooters, including the Italian contingent, camped out at a local sports club Friday for what some participants call the highlight of the event: a huge, often raucous party.

At the awards ceremony Saturday, the town&#8217;s mayor told the crowd of about a thousand international soldiers, reservists, police, government agents and civilians how the Italians partied until 5 a.m.

Smiling, he told them he&#8217;d ordered 15 flower arrangements to give to the families living closest to the sports club to ensure there were no hard feelings.

Monte Kali is, after all, as much friendship exercise as it is shooting competition.

As a thank you to the U.S. military for hosting the event &#8212; the Army&#8217;s 39th Finance Battalion has helped the German reserve soldier association RK Giesel coordinate the competition since 2001 &#8212; it also acts as fundraiser. This year&#8217;s competition gathered $5,000 for Landstuhl Regional Medical Center&#8217;s Fisher House.

The money was raised from entry fees for the competition and by selling people the chance to fire, and perhaps qualify on, various foreign weapons, including the American M-4 and M-16, the Austrian Glock 17, and the German Bundeskriminalamt&#8217;s MP5 and UMP assault weapons. The Bundeskriminalamt, or BKA, is the German version of the FBI.

But the real reason many foreign soldiers look forward to firing the weapons is to earn foreign qualification badges, which they can wear on their uniforms. For Germans, the U.S. qualification badges carry the same sort of prestige the German Schuetzenshnur, which American servicemembers can earn by qualifying on three German weapons, carries for U.S. troops.

But the big hardware here comes from winning the 300- meter competition. This year, 310 teams of four signed up to battle against each other using the German SL8, a civilian version of the G36.

Each team member had three minutes and 20 rounds to knock down as many 300-meter targets as possible. They earned extra points for finishing faster, and were docked points if they went over their allotted time.

By the end, though, friendships had blurred team lines. Soldiers traded bits of their uniforms, and in some cases the uniforms themselves, in what became a huge military swap meet.