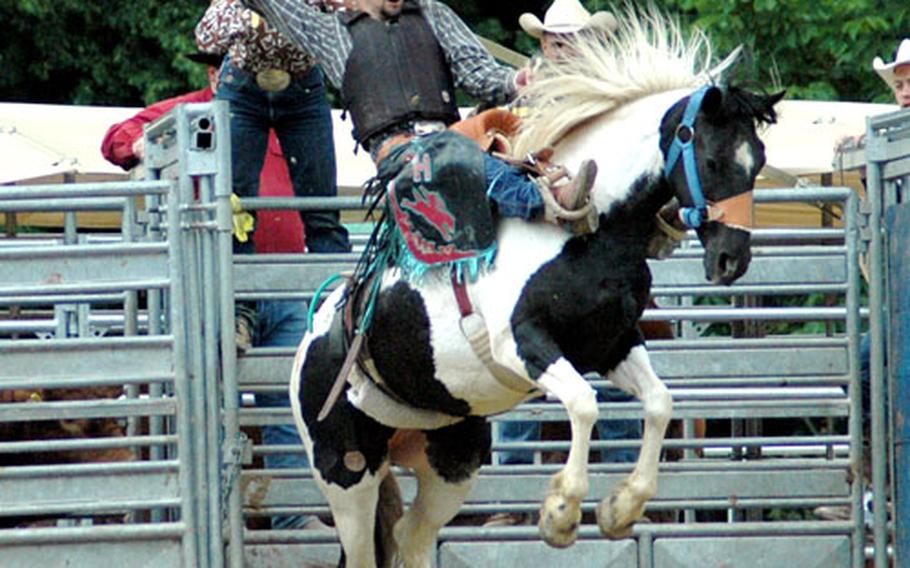 Christopher Hebert, a former soldier and now a government civilian worker, rides a bronco during a rodeo in Seelitz in eastern Germany last summer. The European Rodeo Cowboy Association has more than 500 American and German members who compete in both European and association events. (Monika Lange / Courtesy of ERCA)

The European Rodeo Cowboy Association winds up its first weekend of the season with two performances Sunday at Hofgut Adamstal in Wiesbaden, Germany.

The association is a U.S. Army Europe-sanctioned nonprofit organization made up mostly of American military members and their families, according to a news release from the association.

Performances begin at 2 and 5 p.m.

The rodeos, which are scheduled for nearly every weekend through May 29, also include a fest tent with a disc jockey and live country band in the evenings as well as vendors selling food and other items like cowboy hats and boots, according to Dieter Brand, who owns the livestock and equipment that the association uses.

More events are expected to be scheduled during the summer, according to an association spokesman.

The European Rodeo Cowboy Association has more than 500 American and German members who compete in European rodeos and ERCA rodeo events, according to the release. It began about 30 years ago with 167 members.

Anyone interested in joining the association can download an application on its Web site or attend one of the events and sign up there, according to the release. Membership fees are $85 for participants, $75 for nonparticipants and $65 for family members. Nonmembers must pay entry fees to attend the rodeos.

Entry fees for spectators for all shows are 10 euros for adults, 5 euros for children 6 to 14 and 25 euros for a family pass that includes entry for two adults and up to three kids, Brand said.

Directions to the rodeo sites are listed on the association&#8217;s Web site. The schedule for dates set for the 2005 season follows. Additional dates will be posted when they become final.