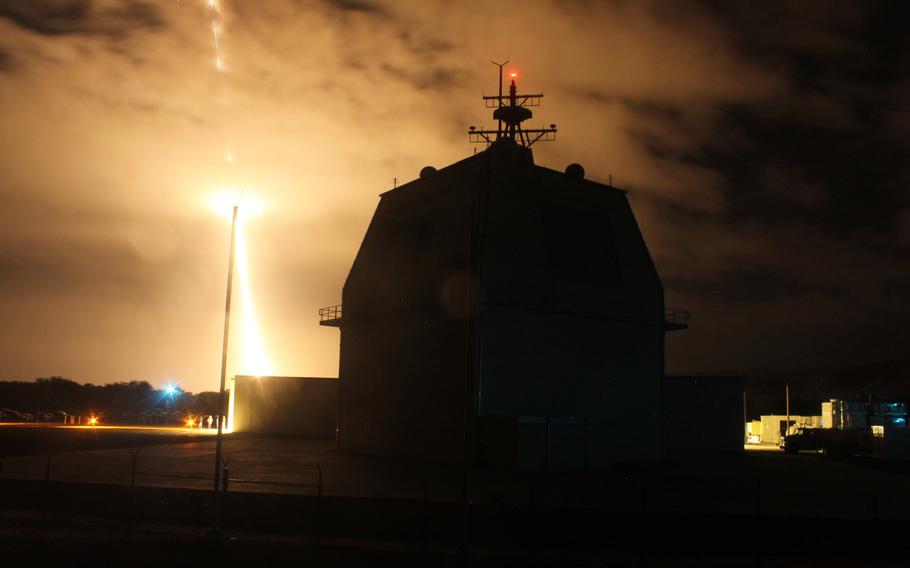 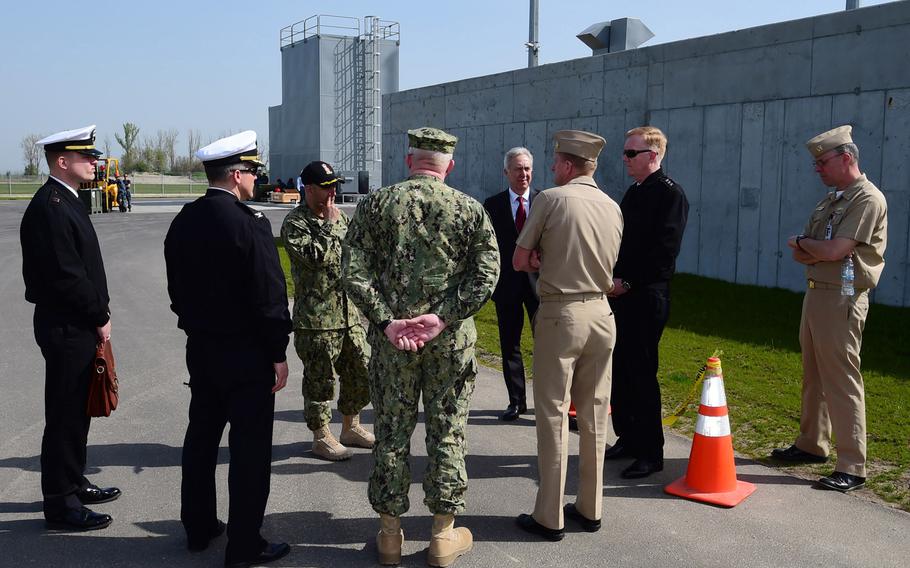 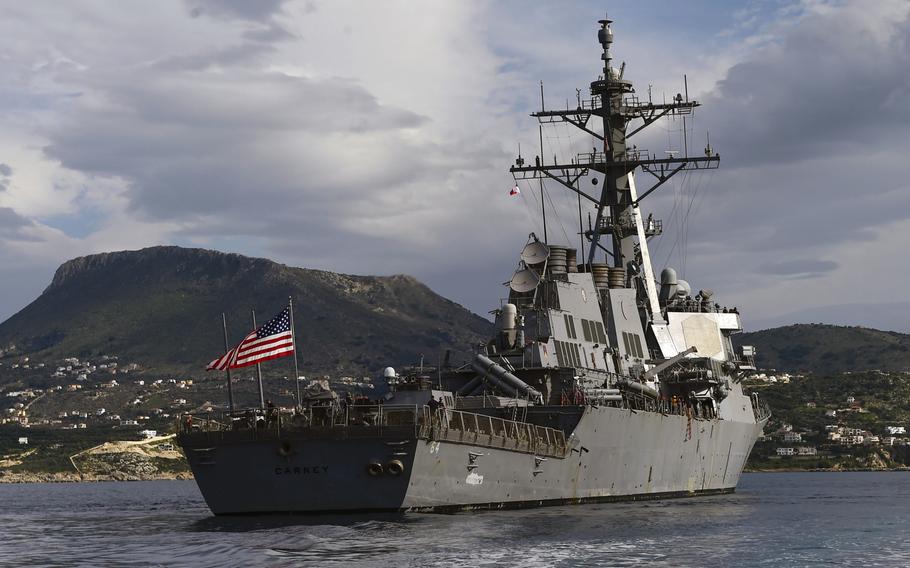 USS Carney anchors off the coast of Crete, Greece, Feb. 14, 2016. The Carney and three other Arleigh-Burke class destroyers based in Rota, and planned interceptor sites in Romania and Poland are capable of firing SM-3 missiles to intercept short- and medium-range ballistic missiles. (Theron J. Godbold/U.S. Navy)

NAPLES, Italy — The United States on Thursday will move a step closer to establishing a missile shield over Europe at a time when new threats are emerging that could curb its utility.

Moscow has criticized the shield as upsetting the regional strategic balance and could respond to Thursday’s ceremony with deployments or exercises along Russia’s western border.

Russia and China are both equipping their forces with modern cruise missiles, while the U.S. is developing an advanced supersonic model, developments that challenge the idea of missile defense as relating to ballistic missiles alone.

“Missile defense is moving from infancy to adolescence,” said Tom Karako, a missile defense expert at the Center for Strategic and International Studies. “There’s still a long way to go in terms of capability and capacity.”

The Romania interceptor site is located in the southern town of Deveselu, a farming community once home to a communist-era air base. A U.S. Navy base now hosts 24 SM-3 missiles and the same Aegis radar and tracking technology employed by modern Navy ships.

The site is part of the European Phased Adaptive Approach, a shield system that includes a radar facility in Turkey, four U.S. Navy guided-missile destroyers in Spain, a command node at the Air Force base in Ramstein, Germany, and a second ground-based interceptor site to be built in Poland and operational by 2018.

Thursday’s ceremony will certify the Romania site as operational, making it ready to be handed over to NATO for use.

President George W. Bush announced the original plans for a shield in 2002 as a guard against intercontinental ballistic missiles targeting European cities and American bases in Europe. The Obama administration changed it to the EPAA in 2009 to focus on short- and intermediate-range missiles, a shift made partly to ease Russian concerns and improve relations with Moscow.

Although the 2009 announcement ruffled governments in Poland and the Czech Republic, the two countries originally slated to host the long-range sites, the mere presence of American bases has been welcomed more recently in a region anxious about Russia, Following its annexation of Ukraine’s Crimea peninusla two years ago.

“There weren’t a whole lot of people in Romania or Poland staying up at night worrying about an Iranian missile,” said Steven Pifer, a former U.S. ambassador to Ukraine who is now with the Brookings Institute in Washington. “What this means to them is having American people and hardware on their ground. And I think especially with recent Russian actions.”

The missile defense plan has been a major irritant in relations with Russia ever since it was first considered at the Prague summit in 2002. Moscow has continued to criticize the system despite the Obama administration changes, arguing it lays the foundation for more sophisticated interceptors that can be used against its own missiles. A Russian proposal to run the missile sites jointly was a nonstarter for NATO members.

As it has in recent years, Russia may respond to Thursday’s ceremony with exercises or deployments, experts say. Another possibility, they say, is pulling out of the Intermediate-Range Nuclear Forces treaty, which prohibits ground-launched ballistic and cruise missiles with ranges between 500 and 5,000 kilometers. The U.S. has already accused Russia of violating the treaty by testing a ground-launched cruise missile.

“There is a developing action-reaction cycle,” said Daryl Kimball, executive director of the Washington-based Arms Control Association. “The deployment of ballistic missile interceptors in Romania, Poland, it may become a sort of excuse for Russia to take some kind of counter-measure.”

Kimball questioned the rationale behind the missile site deployments, arguing that the recent U.S. deal with Iran removed the nuclear threat “for a generation.” Although the agreement doesn’t stop Iran from advancing its ballistic missile program, Kimball argues that it makes little sense for Iran to strike with conventional weapons against European targets.

Others, like Karako, say the threat remains so long as Iran continues to develop missiles and show interest in a future nuclear program.

Cruise missile proliferation poses a new threat, experts say. Russia demonstrated the capabilities of its Kalibr cruise missiles by striking targets in Syria last year from a submarine in the eastern Mediterranean and a surface ship in the Caspian Sea. China has deployed the missiles across its coast and even into disputed waters of the South China Sea.

The U.S. takes the threat of Russian anti-ship cruise missiles seriously enough that it is equipping its warships in Spain with a new missile-defense weapon. Congress has offered funding for the Navy to install air defenses on the Romania missile site, money the Navy has instead asked NATO to provide.

Yet neither is a guarantee against missiles that are becoming stealthier, faster and more advanced in defeating existing defenses.

“The air defense problem is becoming more complex and difficult to defend in some ways,” Karako said.

The U.S. may be fueling the development drive by working on an advanced cruise missile with a supersonic capability, a technology that competitors like Russia and China would look to offset.