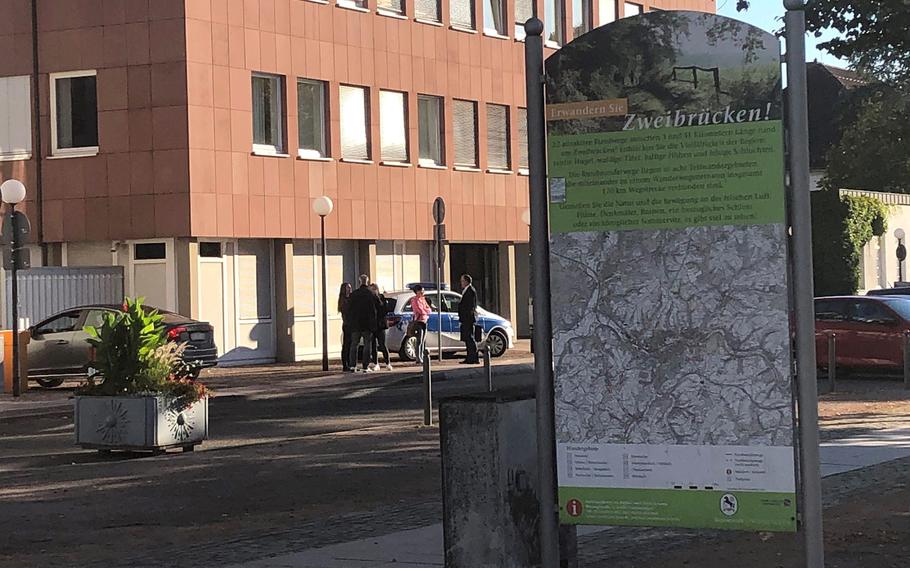 The trial continued Sept. 3, 2019, at the courthouse in Zweibruecken, Germany, of three men charged in connection with the violent invasion of an American family's home in Landstuhl in February. (Karin Zeitvogel/Stars and Stripes)

ZWEIBRUECKEN, Germany — A moving company worker posted on Facebook and told colleagues that an American family had a safe filled with gold coins and gold-plated roses, witnesses said Tuesday at a trial for two men charged in the violent burglary of the Americans’ residence.

The moving company worker, S.S., who, under German law, may be referred to only by his initials, told the court he helped move a safe that “must have weighed [880 pounds] and needed six or seven men to carry it into the house.”

“The American man counted every single gold-plated rose to make sure they were all there,” said the witness, who no longer works at the moving company.

The American family’s home was the scene of a violent burglary in February in which one burglar was stabbed fatally by the father, who is a Defense Department civilian and former Air Force major.

Asked by the judge how someone not involved in the move — including the four men who attempted to burglarize the residence on a Sunday evening in February — might have learned of the Americans’ high-value collection, S.S. said he talked about it with colleagues during a cigarette break at the moving company.

Another witness who worked for the same company said S.S. had posted about the collection on Facebook.

Describing how information about the safe might have spread, that worker said he was in a relationship with a woman who often received visits from H.M., the burglar killed by the American father during the break-in.

“My girlfriend’s mother used to be in a relationship with H.M. and he came over often, looking for his ex,” the witness said. “H.M. may have heard me talking with my girlfriend about a big job I was working on.”

The last time H.M. visited was two days before the home invasion, he said.

The head of the police team that investigated the crime said news of the safe spread quickly among moving company workers.

The police immediately suspected that a moving company employee might have tipped off the burglars about the family’s gold collection, but their investigation only produced useful leads when a worker came forward and was granted immunity in exchange for information.

The movers’ involvement in the break-in has prompted Americans to post their concerns in local social media groups.

About 50,000 Defense Department personnel and their families live in the Kaiserslautern area, which includes Ramstein Air Base, and most of them use military-contracted, locally based movers.

The testimony on Tuesday came after two of the men accused in the home invasion pleaded guilty last week to attempted burglary.

The third man, a 61-year-old with a long criminal record, is being tried separately. His lawyer told the court today that he also will plead guilty to attempted burglary when he next appears in court, in two weeks’ time.

The admission of guilt by all three suspects means the American couple, who were at home with their three children at the time of the attempted burglary, will not have to return to court to testify.

The suspects face up to 15 years in prison if convicted of attempted burglary and one additional year for failing to help the suspect who died.

The two who have pleaded guilty testified that after the American man opened the door, the suspect who later died forced his way inside. The three who remained outside fought with the American man, who pushed them out and slammed the door.

The American then grabbed a kitchen knife and ran upstairs, where the lone suspect who’d entered the house was attacking his wife, according to previous testimony.

The American stabbed the suspect as he chased him out of the house. The four men, three of whom were brothers, drove away in a van but stopped in a village 10 miles away to ask for help for the wounded man, whom they left on a sidewalk. An ambulance crew pronounced him dead shortly afterward.