With hundreds in the military community facing German tax penalties, Army says it will take a closer look 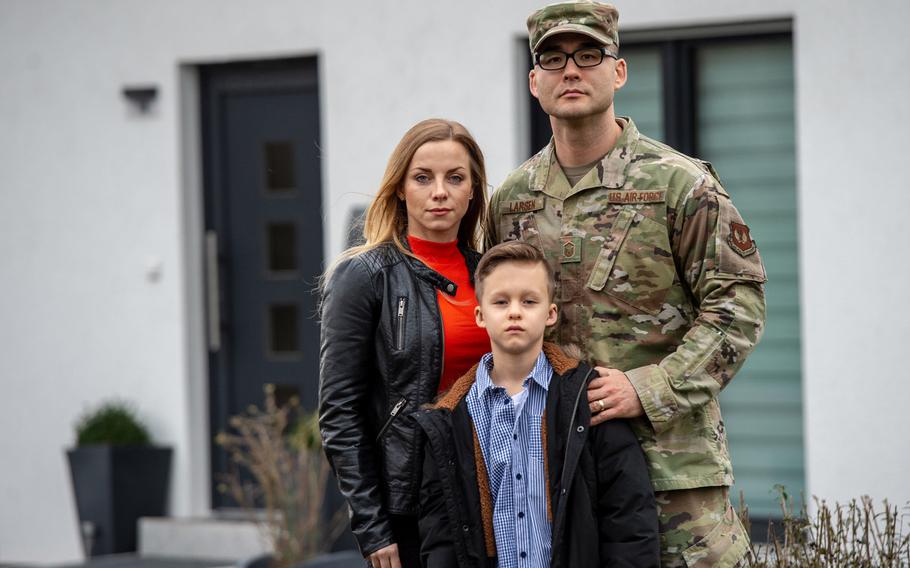 Master Sgt. Matthew Larsen, wife Kathrin and son Jayden stand in front of their house in Reichweiler, Germany, March 11, 2020. German tax authorities are demanding that Larsen, an active duty airman, pay German income tax. U.S. Army Europe says it will step up efforts to warn troops and civilians of the risks they face when it comes to getting taxed by German authorities. (Brian Ferguson/Stars and Stripes)

STUTTGART, Germany — U.S. Army Europe says it will step up efforts to warn troops and civilians about potential financial risks as local authorities attempt to levy German income tax on some members of the military community.

“There are regular measures in place to inform the force and special attention will be placed on this in the coming weeks and months, especially in the Landstuhl, Kusel area,” Col. Joe Scrocca, USAREUR spokesman, said in a statement.

Currently, there are 387 cases of Americans with a connection to the military community who face tax penalties in the Kusel-Landstuhl area alone, according to that tax office, which oversees an area near Ramstein Air Base.

USAREUR said it was only aware of about 200 cases and will launch a broader review with German authorities to determine the scope of the problem.

Historically, military orders for service members and civilians were sufficient proof for an exemption written into the status of forces agreement that shields them from double taxation by the U.S and German governments.

But in recent years, German tax authorities have applied a new interpretation to the SOFA treaty, arguing that personnel must be in Germany “solely” for their jobs to avoid being taxed.

If troops or military civilians marry a German, own property or even extend their tours, then that could be an indication to tax officials of intent to stay permanently. In such cases, German officials have asserted that personnel are viable income tax targets.

USAREUR said it has disputed the German SOFA interpretation and that there is an ongoing effort with U.S. European Command and other U.S. government agencies such as the IRS and State Department to resolve the issue.

While most cases appear to involve Defense Department civilians, the Kusel-Landstuhl tax office recently demanded that an active duty Ramstein-based airman pay German income taxes because he is married to a local woman.

The case, which is working its way through the German legal system, could prove precedent-setting and have financial implications for scores of U.S. troops in the country.

“This is discrimination. They are going to be going after a lot of other people and this has to stop,” Master Sgt. Matthew Larsen told Stars and Stripes earlier this month.

Larsen is married to a German, but he intends to retire and return with his family later this year to Florida. Nonetheless, he was forced to retain a lawyer and plans to fight in court if need be.

Greg Evans, a SOFA-protected contractor with University of Maryland’s overseas campus for the military community, found himself in a similar situation.

Although he left his job in the Kaiserslautern area in September for a similar professor post in Japan — evidence, he says, that he had no intention of staying in Germany — he was still hit in February with a 180,000 euro ($195,000) tax bill from the Kusel-Landstuhl tax office.

“My case is in the court system right now, on my own dime,” said Evans, who has so far spent more than $10,000 on attorney fees.

Evans says he isn’t married to a German and doesn’t have any special ties to Germany.

“They did not explain how they came up with this ridiculous fine,” Evans said. “It is obvious that the Kusel Finanzamt (finance office) is making up its own rules to suit their needs … airmen, soldiers and contractors when assigned to Germany should not live in fear of being found out by the local tax authorities.”

USAREUR said it will bring more attention to the issue during in-processing for soldiers and civilians. There also will be a push to alert personnel about the tax issue through social media notifications via unit and garrison platforms, Scrocca said.

The Army, however, stopped short of saying it would advise personnel living off post to avoid the Kusel-Landstuhl area.

Annika Herbel, a spokeswoman for the Rheinland-Pfalz finance department that oversees local tax offices, said the taxation of U.S. citizens is based on “tax justice.” In the case of Americans connected to the military, they must demonstrate a willingness to return home for their tax exempt status to be preserved.

“The tax authorities must therefore examine this willingness to return in each individual case,” she said.