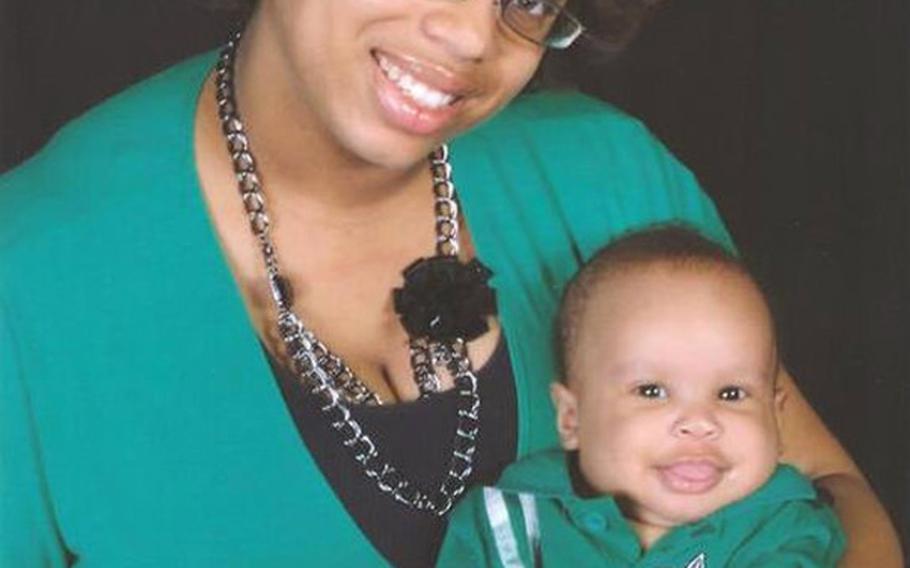 Jennifer Wickware holds her son Cordale in a photo she titled "Me and my little man." It was posted to her Facebook page in June 2010, four months before his death from what authorities say was fatal child abuse. Wickware was sentenced in German court in May to five years in prison for failing to protect her son, and her husband, Airman Horace Wickware, faces court martial on murder charges in September. ()

SPANGDAHLEM, Germany &mdash; The wife of a Spangdahlem Air Base airman charged with murder in the abuse death of his infant son testified at his court-martial Monday.

Jennifer Wickware, who was sentenced in May to five years in prison for negligence and maltreatment for not protecting her child, was accompanied to Airman 1st Class Horace Wickware&rsquo;s court-martial by a uniformed German prison guard.

In often tearful and halting testimony, Jennifer Wickware told the court that after her 7-month-old son was brought limp and not breathing to a German hospital Sept. 2, 2010, &ldquo;the thought never crossed my mind that the reason Cordale was in the hospital was because Horace had hurt him.&rdquo;

&ldquo;I said he wouldn&rsquo;t do that,&rdquo; she testified.

She changed her mind, she said, after seeing X-rays and other evidence that prosecutors say show the baby had been abused, with a burn and several fractures, and then died Oct. 30 of a brain injury from being violently shaken. He was on life support until his death, prosecutors said.

Horace Wickware pleaded not guilty when his trial began last week. In opening arguments Friday, the defense attorney, Air Force Maj. Pilar Wennrich, told the eight-member jury it was not known who caused the baby&rsquo;s injuries. Wennrich described Horace Wickware as a &ldquo;caring and affectionate father.&rdquo;

Jennifer Wickware&rsquo;s appearance in court Monday was the first time in a year that she had seen her husband. She would not look at him, even when asked by prosecutors to point him out.

In her testimony, she said Cordale had been a happy, healthy baby until she returned with him to Spangdahlem from Texas, where she had given birth. He was then 5 months old.After a couple of weeks, she said, &ldquo;he wasn&rsquo;t acting himself. He was just lying there. He wasn&rsquo;t the same baby we had brought to Germany.&rdquo;

But on Aug. 19, when the couple visited the Spangdahlem base pediatrician after the baby was somehow burned on the shoulder, they got a different response.

&ldquo;The first thing Dr. Burns did when she came in was say, &lsquo;Oh, my God, what happened?&rsquo; &rdquo; Jennifer Wickware testified. Dr. (Maj.) Antoinette Burns, in a videotaped deposition played for the court Friday, said she was &ldquo;alarmed&rdquo; by the redness of the baby&rsquo;s skin, that her &ldquo;suspicion for abuse was extremely high,&rdquo; and that she alerted Family Advocacy.

Wickware told the court Monday that Burns instructed the couple to take the baby again to the German hospital. The doctor there said the burn could have been accidental in the bath.

Wickware testified that the last time she saw the baby breathing was the morning of Sept. 2. She was going to clean the house for a family advocacy visit. Her husband put the baby in his new swing, she said, and she went into another room to mop. A few minutes later, she testified, her husband came in.

&ldquo;He said I needed to come and look, because he thinks Cordale likes his new swing,&rdquo; she said. She went to look.

&ldquo;Cordale was slumped over to his right. His whole body was limp,&rdquo; she said.

The defense attorney suggested that the reason Jennifer Wickware was testifying against her husband was because she felt abandoned while she was in jail and now resented him. On redirect, Benjamin Beliles, the prosecutor, asked if anyone else had access to Cordale besides her and her husband. No, she said.

&ldquo;Are you testifying against your husband because of resentment?&rdquo; he asked. No, she said.

&ldquo;Jennifer,&rdquo; the prosecutor said, &ldquo;did you hurt this baby?&rdquo; No, she said. Wickware was on the stand for 3&frac12; hours.

The trial is expected to last at least through the end of the week.