Boxes of Moderna COVID-19 vaccines at Aviano Air Base, Italy, in January 2021. The vaccination campaign for the U.S. military in Europe is lagging as the community waits to receive more vaccine. ( K. Tucker Owen/U.S. Air Force)

Boxes of Moderna COVID-19 vaccines at Aviano Air Base, Italy, in January 2021. The vaccination campaign for the U.S. military in Europe is lagging as the community waits to receive more vaccine. ( K. Tucker Owen/U.S. Air Force) 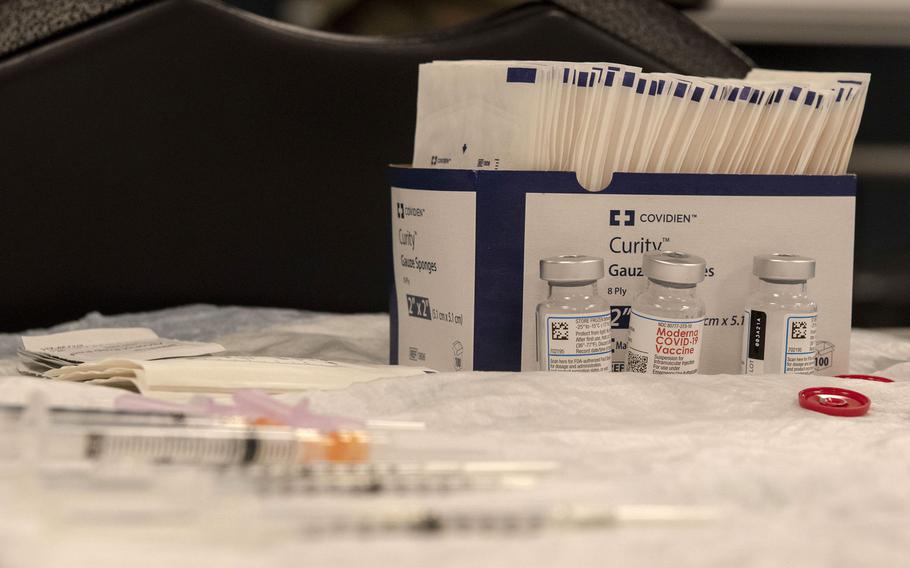 Doses of COVID-19 vaccine lay ready to be administered to members of the 701st Munitions Maintenance Squadron at Kleine Brogel Air Base, Belgium, in March 2021. The vaccination campaign for the U.S. military in Europe is lagging as the community waits to receive more vaccine. (Erin Recanzone/U.S. Air Force) 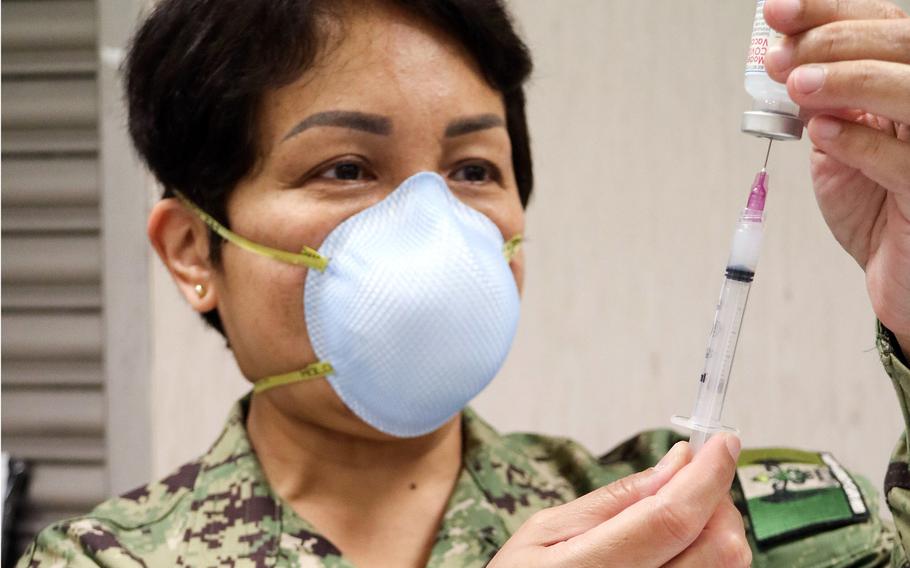 Lt. Cmdr. Kathleen Bautista, a nurse at U.S. Naval Hospital Naples, prepares a syringe with the Moderna COVID-19 vaccine in Naples, Italy, in February 2021. Naples has vaccinated at higher rates than much of the U.S. military community in Europe, which has suffered from vaccine shortages. (Christina Clarke/U.S. Navy)

KAISERSLAUTERN, Germany — Health officials expect more coronavirus vaccines to be available to service members and families in Europe, where vaccination rates have lagged behind military communities in the U.S. and many overseas installations.

Many personnel and family members in Europe with high-risk medical conditions are still waiting to get their first shots. The timeline for offering vaccinations to all who want them is uncertain, even after President Joe Biden announced Tuesday that he wants every adult in the U.S. to be able to receive vaccination appointments by April 19.

“While we have been hesitant to make predictions on future vaccine deliveries, we are confident that vaccine allocations to Europe will increase throughout April,” said Gino Mattorano, a spokesman for Regional Health Command Europe.

About 25% of the adult Army community in Europe has received at least one dose, and 11% of beneficiaries have been fully vaccinated, Mattorano said Tuesday.

In the U.S. general population, 42% of those over 18 have received at least one dose, and 24% have been fully vaccinated, Centers for Disease Control and Prevention data showed Tuesday.

The Air Force in Europe includes all family members, including children who are ineligible to receive the vaccine, in their data. The figures show 32% have received at least one dose and 21.5% are fully vaccinated, said 1st Lt. Hannah Durbin, a U.S. Air Forces in Europe — Air Forces Africa spokeswoman.

At Ramstein, the largest Air Force base in Europe, vaccinations are mostly going to essential workers, personnel preparing to deploy and those 75 years and older.

The clinic has vaccinated a limited number of people with underlying health conditions “due to Ramstein’s large population size and number of doses required for this tier,” 1st Lt. Shelby Chapman, a spokeswoman for the 86th Airlift Wing, said in a statement.

The wing anticipates it will receive more doses “over the coming weeks,” Chapman added.

Availability has varied within Europe between services, countries and within garrisons. U.S. Army Garrison Rheinland-Pfalz’s Baumholder community announced appointment registration for its entire population in a Facebook post this week.

About 25 miles south, Landstuhl Regional Medical Center and its thousands of beneficiaries are mostly waiting. The hospital said in a statement that they “expect to begin vaccinating” a tier that includes those with high-risk medical conditions next week.

Several of those considered high risk who were able to get vaccinated counted themselves lucky.

Bill Black, 67, a Marine Corps retiree and his wife, Judy, were vaccinated Monday in Wiesbaden, Germany.

“Judy has a sore arm. I have a sore head after celebrating last night,” Black said Tuesday.

Black was ready to fly to the Navy base in Naples to get inoculated before being turned away. Naples has been well ahead of most installations in Europe since January. The base reported last month that 40% of its population had been fully vaccinated.

There’s also been some progress elsewhere in Italy. The Army in Vicenza opened inoculations to those with one or more high-risk conditions this week. But at other bases, campaigns continue to stall.

The Army’s Bavaria garrison clinic in Hohenfels said Monday that no additional vaccine was received or administered last week, and none is expected this week.

“Rest assured, we are diligently advocating for our clinic to receive more vaccinations for the community,” the clinic said in a Facebook post.

Some Americans have appealed to Congress for help.

Emilee Seger, 31, and her husband, a Defense Department civilian at Ramstein, began writing to their federal and state elected officials in Ohio last month, urging them to make the U.S. military community in Europe a priority, she said.

Ohio is among more than a dozen states that have expanded coronavirus vaccine eligibility to anyone 16 and older.

“The fact that we aren’t even close to that over here and it’s that many less people, is very frustrating,” she said.

In Belgium, Sonja Nieuwejaar, 46, a civilian spouse in Mons, reached out to her New Hampshire lawmakers.

“DOD when it fights a war, the machinery kicks in but in the fight against COVID, it seems like DOD was unprepared and I’m not sure what happened,” she said.

In correspondence with Congressional staffers, Seger and Nieuwejaar were told the Pentagon expects to begin making the vaccine available to stateside and overseas healthy personnel and families in early May.

“Just to have a marker on the calendar was encouraging,” Nieuwejaar said, “versus this up in the air, we have no idea” when vaccinations will be available.

The Pentagon did not immediately confirm this timeline when asked by Stars and Stripes on Tuesday.

Lt. Gen. Ronald Place, the Defense Health Agency director, said Tuesday on Twitter that he expects everyone in DOD to have vaccine access by May 1. That projection, however, depends on how quickly the department can get vaccines, Place said at a Pentagon briefing last month.

Outside of Europe, several bases are already well ahead of that timeline.

Fort Bragg, N.C., opened appointments to everyone 16 and up starting Tuesday.

“There are plenty of good appointments available this week,” a message on the base’s Facebook page said Monday. The base offers the Pfizer vaccine, which is recommended for people 16 years of age and older, according to CDC guidance, which recommends Moderna for those 18 and older.

Elsewhere overseas, U.S. Forces Korea announced that the Johnson & Johnson vaccine would be available for anyone 18 and older starting Thursday. U.S. Central Command announced weeks ago that it would be receiving large vaccine shipments and expected the majority of its personnel to be inoculated by early April.